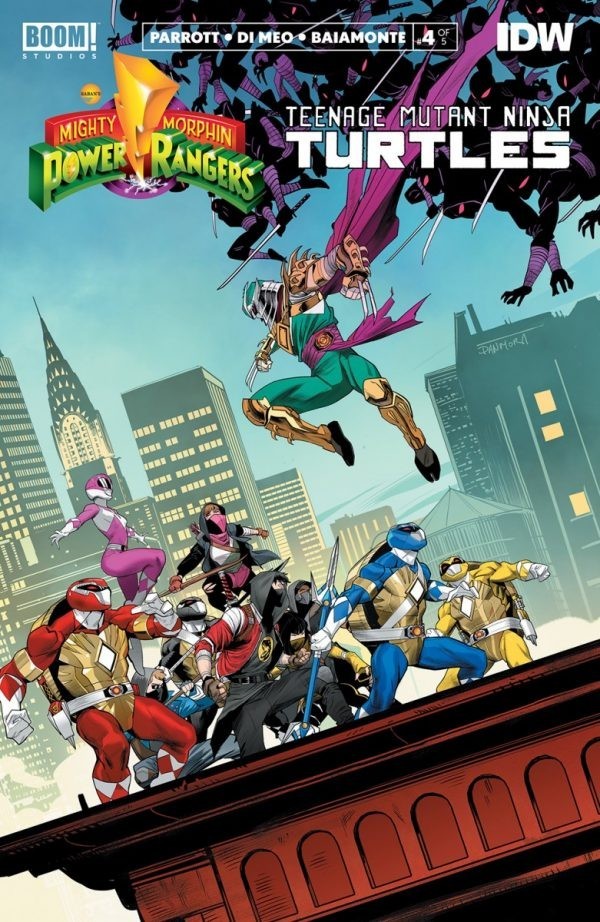 The Teenage Mutant Ninja Turtles and the Mighty Morphin Power Rangers franchises were and still are the staples of early 90’s Saturday Mornings. From the wise cracking and sometimes dark storytelling of TMNT to the bright live action teenage values come monster fest that is the Mighty Morphin Power Rangers. Both couldn’t be further removed from each other but what happens when these two worlds collide?

Boom Studios and IDW bring us this exact thing when both super heroes team-up to take on The Foot Clan and Rita Repulsa. It sounds crazy but this is a mixed matched team-up that really works and issue #4 of this story plays ever more into the action and carnage that is synonymous mostly with the Turtle brothers.

Mighty Morphing Power Rangers/TMNT is brought to us by the team of writer Ryan Parrott and illustrator Simone di Meo (with assistance from Alessio Zono) and finally with colours by Walter Baiamonte (with assistance from Igor Monte). This results in a colourful, well written adventure through the franchises’ now shared universe. The TMNT have yet another distinct look that although is similar to past designs it is yet ever so tweaked to be  different, whilst the Power Rangers have been kept to their tradition generation one looks. The Shredder in particular is very well designed and takes a more darker, powerful look when compared to previous iterations of the character.

The previous three issues of this five part series has seen the Green Ranger infiltrate the Foot Clan to rescue and old friend. Things go bad and Shredder becomes imbued with Power Ranger powers. With the Turtles and the Rangers teaming up to tackle a Shredder and Rita Repulsa team up, both hero teams head to New York to stop Shredders plan coming to fruition.

Issue #4 kicks off with Foot Clan lackey – Baxter Stockman (pre-fly form) unleashing his hybrid – Wyldfyre on to an unexpecting New York. It’s not long before the Turtles kick the action off. With themselves and April now in possession of the remaining five power coins we finally get to see a TMNT version of “It’s Morphin Time”. Meanwhile the now powerless Power Ranger team attempt to rescue Tommy from the depths of the Technodrome. Whilst initially powerless a lesson from Master Splinter we see them donning “Ninja” outfits to complete the role reversal. The surprise twist comes in the form of the final three pages. With the fight above ground going in favor of the Turtles, Rita Repulsa shows the Shredder what she is capable of which results in two “loveable” TMNT characters getting the Power Ranger “Make them grow” treatment.

This whole series has been crazy. From the slightly slow build up in issue #1 to the crazy ending of this issue, I’ve not wanted it to end. I am a massive fan of both franchises and its great to see these two worlds collide. The Turtles and April look pure badass as Power Rangers (as does Shredder) and it’s great to see that treatment given to them.

Whilst slightly weaker, the Power Rangers storyline is starting to kick up a gear but still feels like a TMNT story. There is a great bit where Splinter sets the Rangers down the path of the Ninja but we have seen before as a back drop to every TMNT story.

I have never read a crossover/team-up that’s been anymore bizarre but as I have mentioned before this is one that really works and is definitely worth reading. With the story coming to its conclusion in the next issue I’m hoping this crossover gets the ending it deserves.