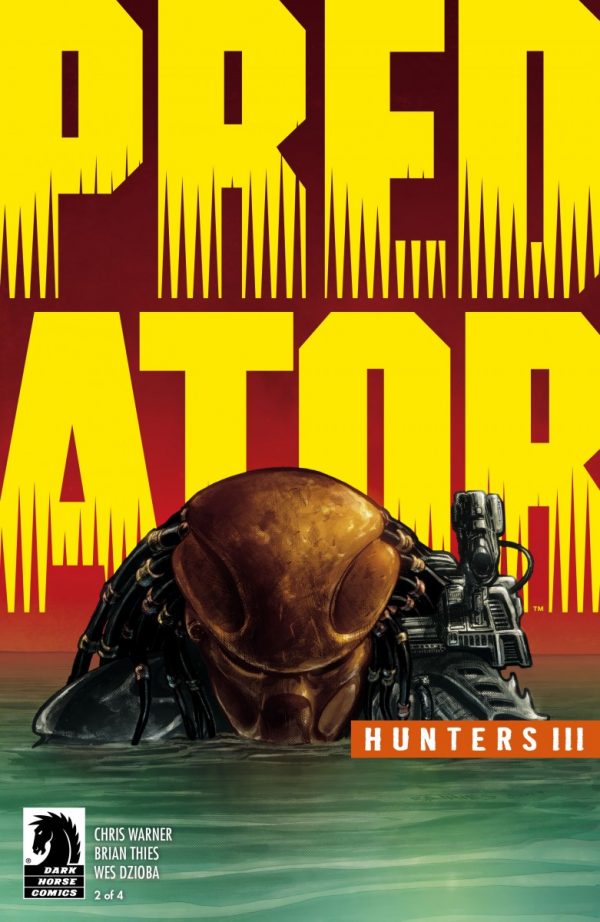 The opening issue of Predator Hunters III didn’t do too much to make me feel invested in what was happening. Granted this is my first outing with Predator Hunters so I am coming in with a fresh perspective, and thankfully issue #2 tries its best to piece together my questions. although I’m still wondering what’s going on.

The majority of this second issue is made up of the main team that we have been following getting reacquainted in a Belize bar. Jaya gets information from her informer who happens to be former NYC Cop – John Schaefer, who Predator fans will know as the brother to Arnold Schwarzenegger’s Dutch Schaefer from the original Predator film. John has also had a few run ins with the Predator which Dark Horse have explored in some of their previous Predator stories and his involvement is a nice tie in to the first film as well as Dark Horse’s own history with the franchise.

There is a lot of interaction between the Hunters with a few moments that don’t really do much for any of the characters’ growth. We also get a brief scene where the Hunters encounter their counterparts. This segment provides a little tension in the group dynamic but unsurprisingly turns into a U.S.A. Vs. Russia scenario as both warn each other to stay out of their way.

The issue wouldn’t be complete without a visit to the Predator and both encounters are the stand out highlights of this issue. The opening follows a trio of cave divers who happen to be exploring some underground Mayan ruins. Its visually a good sequence which ultimately ends badly for the divers as the Predator duo get to flex their muscles by brutally evicting the divers from their makeshift hideout. The issue closes out with a second encounter that follows the local drug runners as they try to locate their team mates who got butchered in the ending to the previous issue. Naturally it isn’t long before the Predators spring their trap and we get some more insight into the brutal methods these creatures use.

I’m still not overly invested in any of the characters. Human characters are tough to show an affinity to with the Predator series as there is a strong guarantee that a fair few of them wont survive the coming issues. Whilst Jaya, Raphael and Schaefer will no doubt fall into the main trio as the series rolls on it would be nice to get some background to the other hunter team members. The introduction of John Schaefer to the story is a minor plus point as the character to an extent is a legend within the Dark Horse Predator universe. However it’s hard to see what his presence will bring to the overall story apart from echoing the past, and relying on past “heroes” doesn’t necessarily make up a good story.

The Predators on the other hand are worth an issue on their own. Brian Thies works wonders with their encounters and the action really flows from panel to panel. The scenes in the Mayan temple are good and the underwater segments are well coloured. Although the Predators are the standout and their actions are brutal and bloody, its still stuff we have seen before and come to expect from the Predator license.