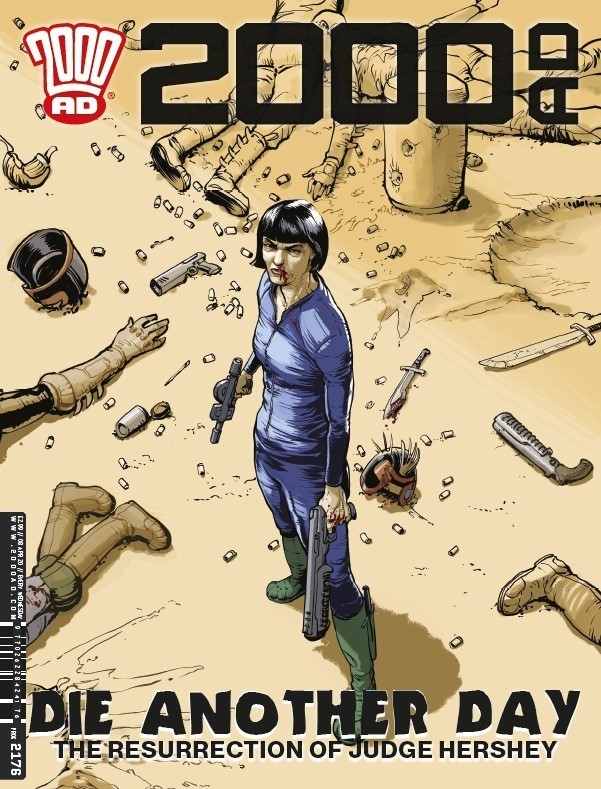 200AD comes at us again this week with Prog 2176. This week’s issue sees everyone’s favourite Lawman  Judge Dredd encounter “The Bird Lady of Al Capone”. The Survival Geeks continue their adventure in part two of “Crisis of Infinite Nerds”. Skip Tracer also sees a vision of the near future in part six of “Nimrod” and closing out the issue we catch up with Aquilar in part three of “The Burning Fields”.

This one shot Dredd story sees the lawman venture into the desolate De-Hab Zone which was decimated in the events of the Day of Chaos. Dredd encounters a single inhabitant of Al Capone block who calls herself “The Bird Lady”. There is a long standing rumour that the Al Capone hab-block houses left over mob treasure from before the Day of Chaos, and the urban legend has attracted many Meathead to find it. This is mainly a tale of superstition, Dredd clearly does not believe in any of it and attempts to help the Bird Lady re-intergrate into Mega-City Ones more habitable zones. Naturally the older generation are more akin to staying put in their homes and due to this the Bird Lady ends up giving Dredd a tip that the urban legend might just be true.

The Bird Lady of Al Capone is unusual for a Dredd tale as it’s more focused on a humanitarian tale than one of Dredd busting some perps. Kenneth Niemand’s story sides with an air of urban legends and superstitions mixed with real world issues such as the stubborn older generation who refuse to integrate with the newer aspects of society even if sometimes it’s in their best interests. Nick Dyer’s art and Barbara Nosenzo’s use of colours capture the run down and desolate De-Hab zone that harkens back to 2011’s Day of Chaos story arc.

The geeks are thrown into the Celestial Synchronicity Conundrum. Armed with paintball guns we catch up with the team as they try to piece together why the Cosmic Super beings have brought them together to fight each other. It’s not too long before the fragile peace talks with the “Trekkies” gets invaded by the “Griefers” and an acid splattered rain of chaos soon follows.

Crisis of Infinite Nerds had me grinning on multiple occasions. Straight away anyone who’s familiar with geek culture will recognise most of the themes, from Aliens to Star Trek to even the new culture of Twitch and online griefing gets a nod. Gordon Rennie and Emma Beeby’s script is full of subtle pop culture references that does wonders with highlighting each groups geek mannerisms as well as the banter that is expressed from the main cast. From a clear inspiration from DC’s very own Crisis on Infinite Worlds the story here is shaping up to be a well crafted ‘trek’ through popular geek culture.

The mysterious Nimrod taps into Nolan’s psychic abilities to show him a vision of the near future. In the very brief vision Nolan is shown ground zero for as Nimrod puts it “the new age”. Nolan soon learns that not only is The Cube in danger but the entire galactic sector!

The Nimrod character continues to be a mystery, its presence in previous parts has only been felt through flashbacks which only hint at any forward progression. The vision that Nolan sees hints to a connection between Nimrod and another character – Legion but this notion is brushed aside before the question is answered. Last weeks part five was fairly action oriented but sadly the built up momentum is lost this week. Paul Marshall and Dylan Teague continue to bring a sense of danger to the story with their art and choice of colours however, the only one downside to this is that during Nimrod’s vision its hard to tell when the segment took place which the script does not allude to either, which leads to questions on when the event actually happens. The overall mystery that surrounds Nimrod is one of intrigue but the build up continues to be frustratingly slow.

Aquila takes us on another trip into the past. With part three of The Burning Fields we delve once again into Aquila’s past and like last weeks part two we are brought back to the Roman/Jewish war. Aquila infiltrates the fortress of Masada but once inside is greeted by the stench of death and the scenes of a massacre – but not one of Roman origin. The only remaining inhabitant is on the verge of completing his horrendous task and will take a long guarded secret to the afterlife with him.

This chapter  continues to show us how Aquila made a name for himself. The discovery of the massacre is both shocking and violent which the script does not shy away from. Whilst not much action takes place this feels more like a substantial filler chapter that both ties into the present story and also answers some of the questions of Aquila’s troubled past.