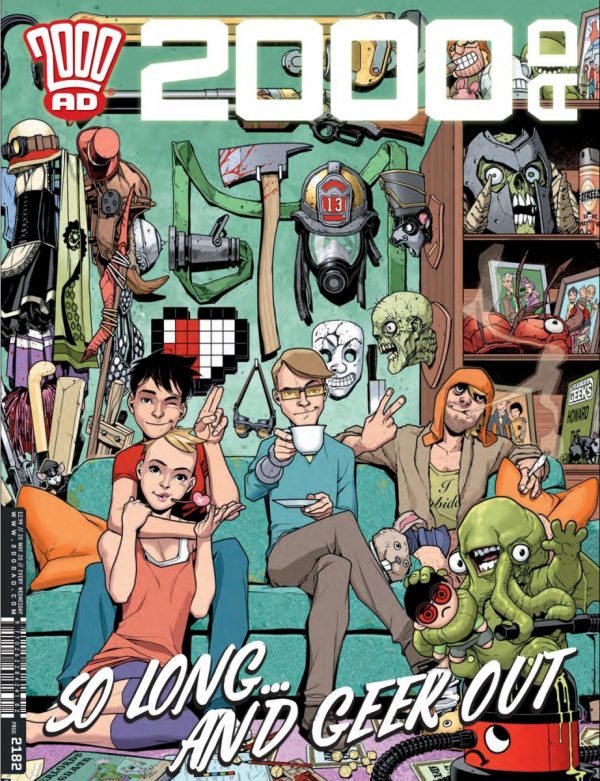 This week in Prog. 2182 is a finale special with no less than three of the episodes wrapping up their current stories within this issue – Judge Dredd – Chimpsky’s Law, Hersey and Survival Geeks. Backing these three up are Future Shocks – AI Loves You and a prologue for new series of  The Order: Inbetween Days.

As Noam Chimpsky continues to swing through Mega-City One, Dredd is still in hot pursuit. Things don’t look to be going in Noam’s favor until he manages to briefly stall Dredd with use of his own special anti- Judge Dredd formula.

These last five issues have be a wonder to read and Kenneth Niemand and PJ Holden really have delivered a great tale. Noam Chimpsky is portrayed as a resourceful and clever hero and this issue even pokes fun at Dredd which doesn’t happen very often. The ending does leave the door open for a hopeful future return of Noam Chimpsky (and a bit of humor) into Dredd’s often chaotic and dark world.

The Order – In Between Days

The Order is a complex read that has a very bizarre history, much like early 2000’s X-Men. The basic structure is that humanity is constantly under threat from the Wyrms and our only defence is The Order. The Order and the Wyrms have been fighting each other for centuries and in a story a while back the Wyrm fractured time to create a new chronology. Which is why Francis Bacon has access to future technology.

The prologue to this new tale is a mash-up of fighter planes dive bombing horse backex cavelry, Zeplins, armoured shock troopers and tanks ploughing through everything and everyone. What time in history is this you may ask? Well it’s only set in 18th Century Prague in the midst of the Franco-Prussian-Bohemian War! Its all a bit bonkers but John Burns’ artwork more than makes up for it.

This is a very special Future Shocks and features the winners of the 2019 2000 AD writer and art contests that happen every year at the Thought Bubble Festival. This year’s winners Liam Johnson and Robin Henley tell a story of a romance gone digital and this is their competition prize.

Set in the not too distant future this tale shows exactly how the world could end up. Whilst the ending is not cataclysmic they often don’t need to be. Its a great read and surprisingly very  thought provoking. With smart technology evolving how we as a race communicate and access information how long will it be before we become too reliant upon hand-held smart technology?

The second conclusion in this Prog sees former Chief Judge Hershey end her first outing. There has been a lot to process during this tale with Hershey trying to make sense of who she is and what exactly she is doing. Rob Williams’ sparse story telling and dialogue does great work at showing us what inner conflict  Hershey is going through.

Simon Fraser’s artwork does a wonderful job of portraying the world with his use of stripped-back art and a muted colour scheme. There is also clever use of black and white to symbolise Hershey’s past that hearkens back to classic 2000 AD.  Hershey has been a tough character to bring back, but I feel this storyline has done the character a lot of justice and I look forward to seeing if there is any more adventures in the works.

The final ever Survival Geeks story sadly comes to an end. As the Jack Kirby inspired celestial beings are finally unmasked it did come to no surprise that the reveal was yet another bunch of nerds. But, as how the previous seven issues have gone, how couldn’t they be?

As an ending to the whole Survival Geeks saga, this one left no stone unturned and gave the Geeks a send off they well and truly deserve.