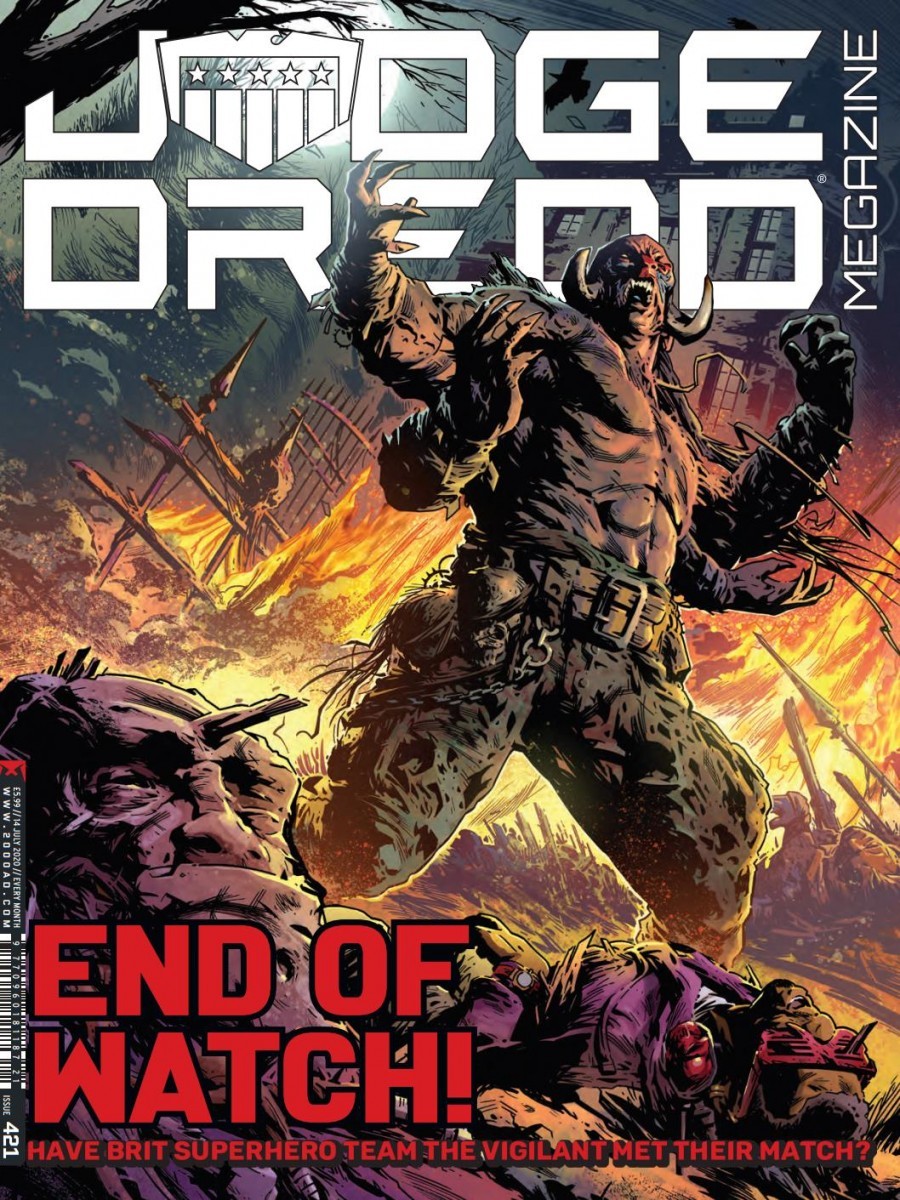 Just four strips in this months issue; a one shot for Judge Dredd, the penultimate part of Blunt III, more from Marshall Lawson in Lawless and finally the feature-length ending to The Vigilant.

Euro-Cit Judge, Judge Calvin arrives in Mega-City One to pick up a perp. Throughout his search for his Perp, Calvin makes his thoughts known about the Justice Department and Dredd and lets just say he holds a low opinion on both.

Rory McConville does a good job with this one-and-done story. The ending seems to hint that he is setting up groundwork for one of his possible future Dredd strips. Staz Johnson’s art is also a pleasure to see back in the Megazine.

The DJ and Rapper Sin Tax has inherited the mantel of ‘Sultan of the Supernatural from his Grandfather and has become the new Doctor Sin. He is also trying to stop the apocalyptic Blood Rapture from happening which is easier said than done. Teaming up with The Leopard from Lime Street, Blake Edmonds, Steel Commando, Death-Man, Thunderbolt, Yao and Pete Parker and his Pocket Army, they become The Vigilant.

After two specials this one marks the ending for the quirky British super-heroes. Coming in at 22 pages the ending does seem a bit of a whimper compared to the previous specials. However, we are treated to a satisfying conclusion. Simon Furman and Simon Coleby have crafted something special here, and it’s been great seeing older characters back in the spotlight.

The crisis on Getri-1 begins to draw to a close with this penultimate part of Blunt III. As this part goes, everyone finally understands how the planet works. With more of an incentive to leave, we a given one more reminder of what the planet does when the Zindi spore infects everything that stands in its way.

Thanks to Eglington and Cook’s work, this tale has been a superb read. It’s been great to see this unique planet and how it fits into the overall Dredd universe.

Part 7 feels more of an intermission to the bizarre goings on in Badrock. The strip opens to a show and then moves on to recap on everything so far. We have Lawson questioning the fundamentals she’s been so sure of, SJS Judge McLure deciding to side with Lawson, and strange body swaps going on. There is so much happening that it’s hard to see how its impact won’t affect future Lawless adventures for years to come.

Windslade’s art is a thing of beauty and how someone can get so much detail across using only black & white I’ll never know.