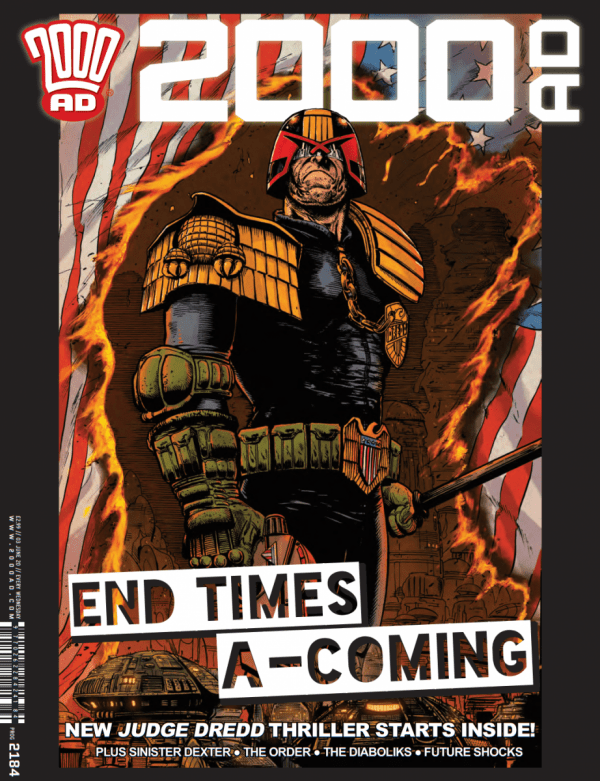 Following on from Prog 2182 and last week’s Regened, it’s all new this issue with the launch a new Dredd story, the return of Sinister Dexter, another Future Shock tale, the next installment of The Order, and finally closing the issue The Diaboliks.

This all new Dredd tale from Rob Williams and Colin MacNeil looks set to be a big one. It certainly starts big with Dredd dreaming of a lone rider aproaching the walls of Mega-City One. These dreams seem to bleed into reality when it turns out the vision has been seen by Judge Anderson and their unexpected guest has asked for Dredd.

MacNeil’s artwork does well to portray the dark brooding reality of Dredd’s nightmare vision of a red moon and the lone rider. Rob Williams script also plays this slow burner opening with hints of Wagner which is never a bad thing.

This certainly on social media is being billed as a big story for Dredd with Rob Williams teasing End of Days to be a “major Dredd story”. With the inclusion of Anderson’s precognition I’m intrigued with how this story will pan out

The return of Finnigan Sinister and Ramone Dexter kicks off another adventure in Bulletopia and part 1 sets this story off on a big scale.

Sinister and Dexter have the job of escorting Brandt out of Downloade. Things go sideways when the trio are captured by a figure from Brandt’s past who also has plans for the rouge A.I.

As I mentioned in my review for Prog 2182, The Order is a bizarre complex tale that can get lost within its own narrative.

Part 1 sees Benjamin Franklin stuck in 1794 Connecticut and is given a mysterious potion that restores his youth. The scene then cuts to Franklin on the run from both the Wyrm and their Agents.

Its a bizarre yet fun opener, watching a youthful Benjamin Franklin blasting his way through Connecticut. But – like with the prologue – its a bit bonkers although John Burns’ artwork makes it worthy of reading.

Future Shocks – Journey To The Edge of The World

These are fast becoming a favorite of mine, with this week’s Future Shock adding more reasons to the list.

A team of explorers venturing out in the freezing cold to find final proof of a flat Earth. The twist is what they really find! This one is a conspiracy theorist’s dream. I won’t wreck the ending but its one that really made me laugh.

This one is Happy Families with a demonic twist. Solomon Ravne and Jennifer Simmons were once part of the paranormal troubleshooting team, Caballistics, Inc. However, Jenny gets possessed by a demon, falls in love with Solomon and the pair have a son.

We catch up to Solomon and Jennifer in a casino, where the pair have attracted the attention of an occult organisation looking for their son. A James Bond worthy car chase through the hills insures as the couple try to evade the organisation searching for their offspring.