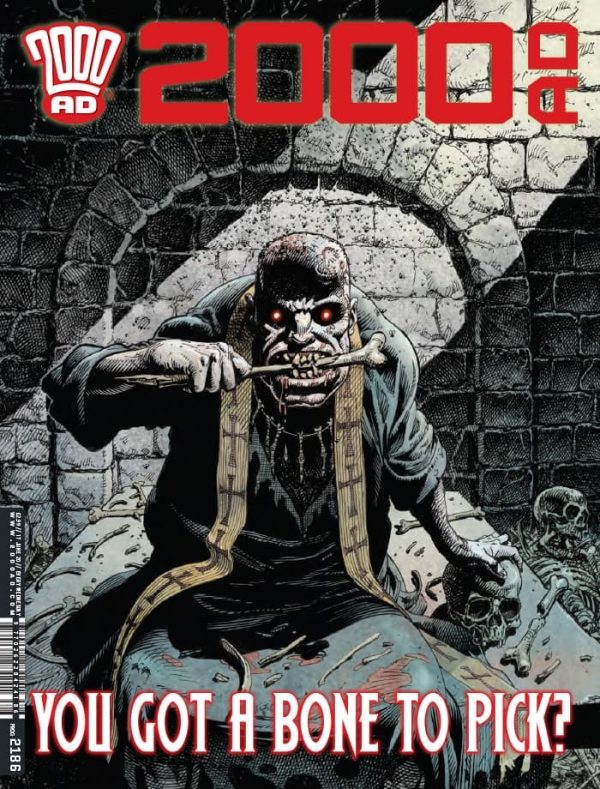 With everything starting fresh way back in Prog 2183, these last three weeks have felt like a new season for 2000 AD. I would have called this weeks Prog a “Part 3 Special” however Full Tilt Boogie is only on part 2 of its first full length strip.

This week we have Dredd and Co. preparing for a hunt in Judge Dredd: End of Days, the boys continue to fight the Rogue A.I. in Sinister Dexter: Bulletopia – Boys in the HUD, Tee decides to take the Prince to see his biggest fan in Full Tilt Boogie, things get heated for Benjamin Franklin in The Order, and finally what evil lurks beneath the church in The Diaboliks: La Vita Malvagia?

This week sees Dredd, Anderson and Azrael set off on in search of the Horseman, Famine. After communicating with the severed head, Anderson informs Dredd that the Horsemen aren’t the same as the Dark Judges and are more spirit based. With information on where Famine is located the trio set off to an all familiar location…

Things are starting to speed up this week, with Dredd and Azrael forming an unlikely partnership in tackling the Four Horsemen. I was beginning to wonder if End of Days was going to turn into another Dark Judges affair, however Rob Williams has this week diluted my thoughts with Anderson specifically mentioning the differences between the Dark Judges and the Horsemen. Colin MacNeil’s art continues to be on point throughout and I’m looking forward to seeing his take on Brit-City.

We re-join the boys were we left them last week. The Rogue A.I. has caught up to Finn and Ramone. Stuck in a warehouse with Finn’s ex-wife Carrie and her killer school girl robot Polly, the foursome have a fight on their hand.

This one was a full-on action special. We are given quite a lengthy action sequence with very little in the way of story progression. I’m hoping that this one doesn’t die out soon as part 1 and 2 really started on a strong point. With the loss of Brant who I assumed was the MacGuffin its hard to see where the boys will go next. I would gather that they will take on the A.I. directly but I guess time will tell.

The world building continues this week. A giant head on Luxos has chosen five knights from the planet’s children to become the Luxine Knights. Meanwhile on board the Full Tilt Boogie, Tee decides to hand Prince Ifan over to his crazy number one fan. Little does she know that the Prince is in contact with his sister, who just happens to be forced into taking Ifans place as leader of the Luxine Knights.

I think a lot of the story is going to come from the Black Dog. Like the reader she isn’t of this world and is a relative newcomer in it, and she makes a good platform to explain the world to the reader through. With the formation of the Luxine Knights and the actions of Ifan’s father I’m left wondering what role Luxos will end up  playing – good or bad?

With the current on goings in the world, its apt for the same issues to be touched upon in The Order. The young Ben Franklin goes through an identity crisis of sorts with Captain Belair reminding him of his past. Whilst Ben ponders his role in the grand scheme of things he is shown that his alternate self had big plans in store.

As always with The Order, John Burns’ art is phenomenal and is always a treat to been seen. KEK-W’s writing also hits home with touching upon slavery and shows that whilst Ben Franklin has a role grand role to play, his past could very well define his own future.

The action takes a more slower turn this week. After agreeing to an uneasy truce with Solomon and Jenny are paired up with Bother Liam.

We catch up with the trio gallivanting through the coastal roads of Italy. With Jenny talking of her experiences with causal murder and mayhem, Brother Liam reminds the couple of the mission at hands. This then leads to a seemingly deserted church that holds a dark secret within its crypt.