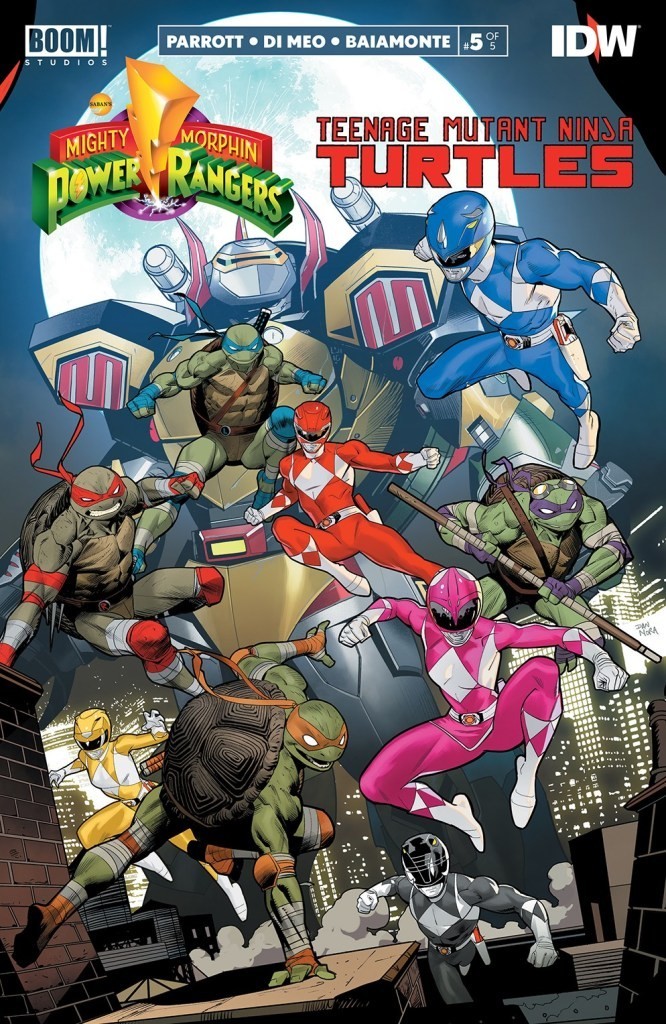 Mighty Morphin Power Rangers/Teenage Mutant Ninja Turtles is a dream cross-over for any kid who grew up in the 90’s. The teaming of these two power houses of children’s television has been a manic and somewhat crazy ride. A ride which slightly tips into the Turtles favor, but issue #5 brings the Power Rangers fighting back to the forefront.

Tommy Oliver (the Green Ranger) has gone undercover within the Foot Clan to rescue his childhood friend. This brings Tommy into conflict with the Turtles, and this conflict then brings the remaining Rangers to New York.

Whilst the Turtles and the Rangers investigate the reasoning for Tommy to abandon his Ranger duties and turn rogue, Tommy is betrayed and turned over to Shredder. Using technology from Dimension X, Shredder is able to take Tommy’s powers and he becomes the new Green Ranger.

Rita Repulsa turns up to claim the Power Coin for herself and after a breif battle with the Foot, the two enemies team up. Rita then uses her magic to strip the remaining Rangers of their power which forces them to give their Power Coins to the Turtles. Whilst the Turtle Rangers fight a giant sized Bebop and Rocksteady, the de-powered Rangers then head into the Technodrome to rescue Tommy.

With Bebop and Rocksteady receiving the signature Power Ranger “giant monster” treatment in the last issue. We all knew it wont be long before the Turtles are handed the keys to the Megazord, and issue #5 does just that.

What follows is a chaotic three-on-one fight with Bebop, Rocksteady and a Shredder controlled Dragonzord against the Turtles. Its crazy and full of flair as the four fight tooth and shell. The whole fight is flipped on its head when the Rangers turn up with the Turtles very own Metalhead – who is also now giant sizd.

With the Megazord damaged, Zordon urges the two teams (Rangers and Turtles) to fuse the Megazord and Metalhead together to create the Turtles Megazord.

It sounds crazy, and trust me it is but its bloody fantastic. Whilst the story doesn’t go into too much intricate detail it doesn’t need to. What’s truly made this crossover a superb read is its interaction between the characters. From Donny and Billy geeking out over technology, Leo and Jason trading fighting styles, and even Raph and Tommy finishing off their fight from issue #1, these interactions show that whilst both teams seem different, in reality they are closer to each other than we first thought.

This series has been a fun read and I would highly recommend it to anyone who is or was a fan of either franchise. It has been a fast paced, highly action orientated series with a great script and full of superb art and colours. Whilst  issue #5 brings the series to a satisfying end, it gives just enough hints at the possibility of a future team up.