Rob Lake reviews Something is Killing the Children #7 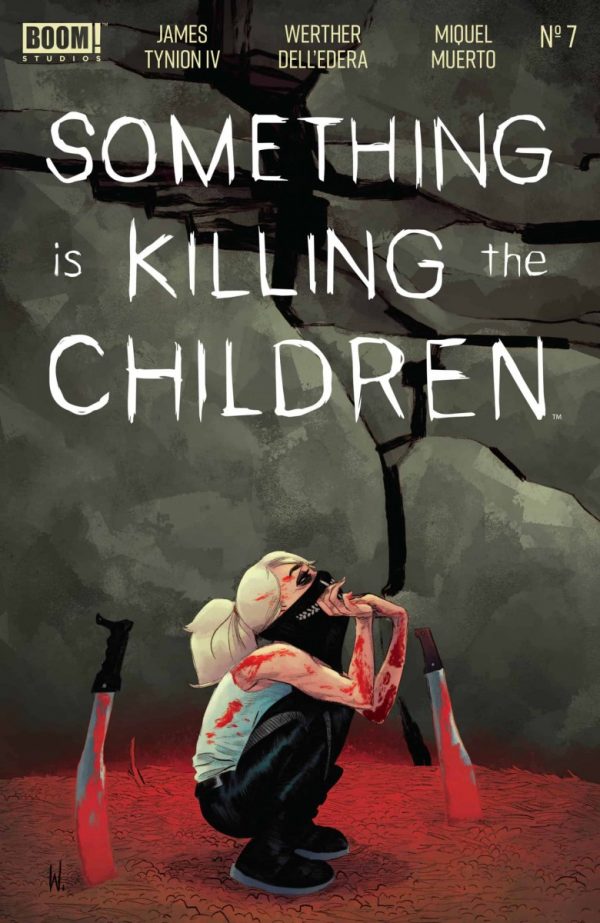 With the events of issue #6 now somewhat in the past, the town of Archers Peak begins to mourn its dead. With Erica still hot on the trail of the creatures offspring, who is the mysterious Aaron and what exactly is the Slaughterhouse?

This issue opens up within the school’s gym which the Sheriff’s department is using as a makeshift morgue. There is a good scene between the school’s Principal and the Sheriff which writer James Tynion IV uses to great effect in portraying to the reader just how overcome and lost the two characters are. Their conversation about matching bone fragments to bodies is a great piece of horror writing and does well to convey the horror of the previous six installments.

We then switch to Erica who is still on the tail of the creature’s offspring. After learning from Bian how many offspring the monster had, her mission is cut short by the arrival of Arron – another member of the Slaughterhouse. Aaron laments Erica for exposing the Slaughterhouses rituals to the outside world and he plans to take over from her. Aaron comes across as a previous mentor to Erica and is high ranking within the Slaughterhouse cults ranks. Whilst Erica is more emotionally attached, Aaron is quick to point out that she should use Bian or James as bait for the monsters offsrping.

After a bit of back and forth between the two we are then introduced to another newcomer. This newcomer is a man named Tom who appears to be a detective of some sort. He seems very interested in Erica and Aaron and plans to reach Bian before they do.

This is another great installment from Tynion and the team. Whilst James takes a backseat in this issue we are given more of Erica’s backstory amidst more mystery with Aaron and the illusive Slaughtethouse. With the creatures still at large I’m looking forward to how the story continues next issue.