Rob Lake reviews Something is Killing the Children Vol. 1… 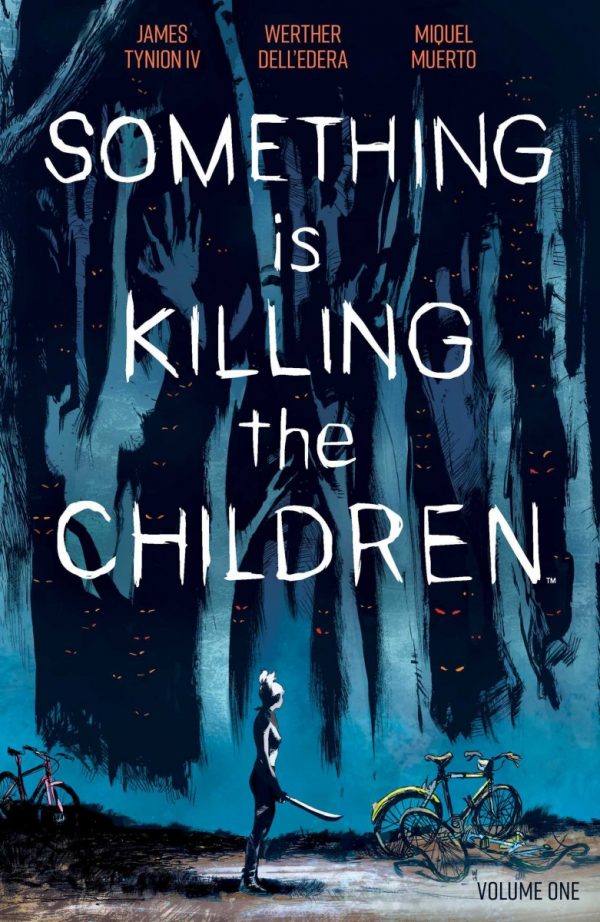 There is an un-written rule when dealing with horror that children don’t die. Kids are often there to raise the stakes to the protagonist and give them something to protect from the big bad. There is never any doubt that they wont physically survive the story and in some cases even become the hero. BOOM! Studios’ Something is Killing the Children, as the title suggests, takes this trope and throws it out of the window.

Created by James Tynion IV and Werther Dell’Edera, Something is Killing the Children is set within the town of Archer’s Peak, and this first volume makes it clear that no one in the town is safe, especially the children. We find out that the children are being taken by an invisible, elusive force that is feeding from the town’s young. So far it sounds a lot like Stranger Things or even Super 8, but Something is Killing the Children takes a more mature and thematic approach to its story.

The horror builds at a slow pace with a lot of time spent expanding upon the groundwork. These slow burners are a great way to really creep in the tension and suspense, but they also allow for a greater build of the characters that make up this world. This isn’t a story just built upon the characters fears. It also does a wonderful job in highlighting a community isolated and afraid of its future due to the recent events.

The tension picks up when a mysterious stranger arrives in town named Erica Slaughter. Erica is introduced as the town’s saviour, a monster hunting Buffy the Vampire Slayer/John Rambo. She knows about the monsters and more importantly knows how they hunt. But as the story progresses we learn that Erica isn’t your typical Super-Hero and isn’t necessarily the towns savior. Sure she may know an awful lot about these creatures but we’re never led to believe she can keep everyone, or even anyone, safe from them.

Whilst Erica Slaughter is arguably the series’ main protagonist, we don’t get a lot of backstory for her within this volume. We are given small insights into who she is and her motivations but throughout this first volume she still remains a relative mystery. The secondary protagonist, James is however another story altogether. James is an awkward teenage boy who happens to witness his friends being slaughtered by the creature. Again we don’t get a lot of James’ backstory but just enough to know he is seen as an outcast by a few of his peers and is coming to terms with who he is. I’m looking forward to seeing how his relationship with Erica moves forward as James brings a more human-side to their partnership.

Werther Dell’Edera’sart is also impressive. The creature design is grotesque, and like in any good horror, it is shown sparingly with minimal detailing. Most of the story revolves around ordinary people coping with sadness and grief, and Dell’Edera also does a good job at capturing this. Even the more mundane moments like James talking to his School Principle have depth due to Dell’Edera’s ability to capture and portray the overall mood.

Simular to this Miguel Muerto’s muted colour palette really captures the creepy and sombre mood. There is also great use of vibrant colours to show off the more intense moments and that is where it counts. The use of the muted greens and grey is a really sensible choice. With the whole atmosphere being one of tradgedy and loss, adding vibrant colours throughout wouldn’t portray this very well.

Something is Killing the Children won’t be everyone’s cup of tea, but this slow burner does a great job of building its world and gives us small glimpses into its characters with just enough mystery to build upon in further issues. This volume ended with enough mysticism to make me want more and I’m intrigued in seeing how this arc plays out.