To celebrate the DVD release of Money in Bank 2020 (available to buy from 29th June 2020) – we are giving away a DVD for one lucky winner. 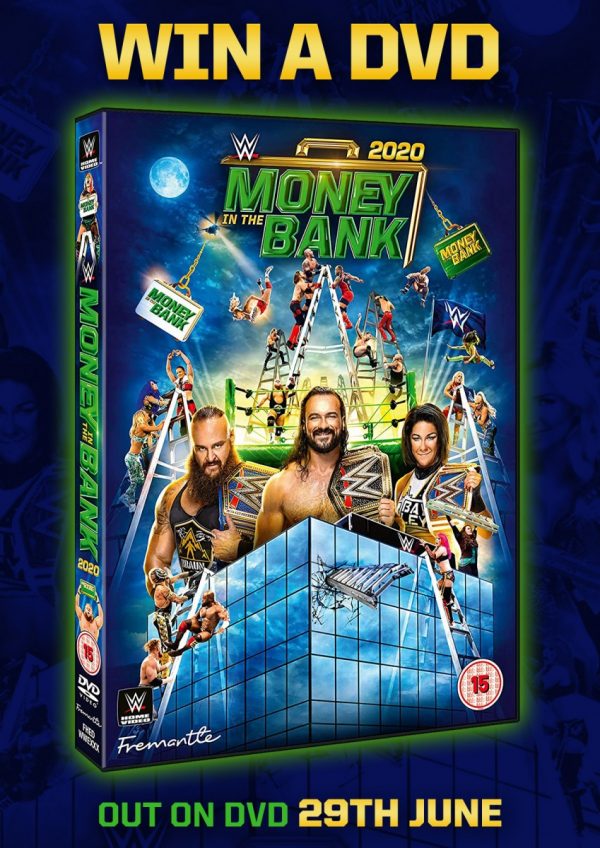 It’s Money in the Bank – one of the most anticipated matches of the year in WWE. But it’s crazier and more unpredictable than ever, as 12 top Superstars attempt to climb the corporate ladder – by battling through WWE headquarters to grab a future championship opportunity! Plus, Drew McIntyre – the first British WWE Champion – puts his title on the line against Seth Rollins! Universal Champion Braun Strowman faces his past in the form of Bray Wyatt! And much more!

Not only do this year’s Money in the Bank Ladder matches take place in WWE HQ, but both the men’s and women’s matches happen at the same time!

Expect wild, never-before-seen action – plus cameos from WWE’s past and present! – as the Superstars battle their way to the roof to grab the Money in the Bank briefcases!

There’s intense action back in the ring as Drew McIntyre defends his WWE Championship against Seth Rollins – a classic match-up between two of WWE’s best in-ring competitors!

Expect mystery and mayhem when Universal Champion Braun Strowman faces his former leader Bray Wyatt. Will the former “Black Sheep” become one of the flock again? Or can he overcome Bray and retain the Universal title?

There’s chaos in the tag team Fatal 4-Way and even more gold on the line as Bayley defends the SmackDown Women’s Championship against Tamina.

The competition closes at midnight on Sunday, July 5th. UK readers only please. To enter, use one of the following methods…