While we already know that several Jurassic Park characters will be returning in the third instalment of the Jurassic World franchise including Sam Neill’s Alan Grant, Laura Dern’s Ellie Sattler, and Jeff Goldblum’s Ian Malcolm, it seems an additional key character from the original film will be making a return, however, he will be played by a different actor. 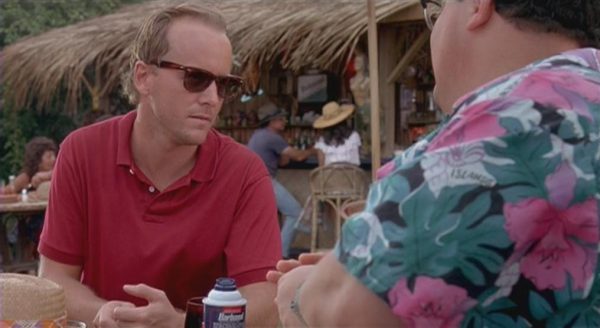 In a recent report by Collider, House of Cards star Campbell Scott will be taking on the role of Lewis Dodgson in Jurassic World: Dominion, the character who was originally played by Cameron Thor in Jurassic Park.

If you don’t remember the character by name, Dodgson was the mysterious man in the red shirt and sunglasses who provided Dennis Nedry, played by Wayne Knight, with a fake can of Barbasol shaving cream to store the stolen dinosaur embryos. Original actor Cameron Thor was sentenced to six years in prison back in 2016 after being found guilty of sexually assaulting a 13-year-old girl.

Collider has also reported that Dodgson has been promoted to CEO of Biosyn Genetics in Jurassic World: Dominion. With the sudden reemergence of Lewis Dodgson in the third film, this could hint to the reasoning behind Alan Grant, Ellie Sattler, and Ian Malcolm returning to the fold.