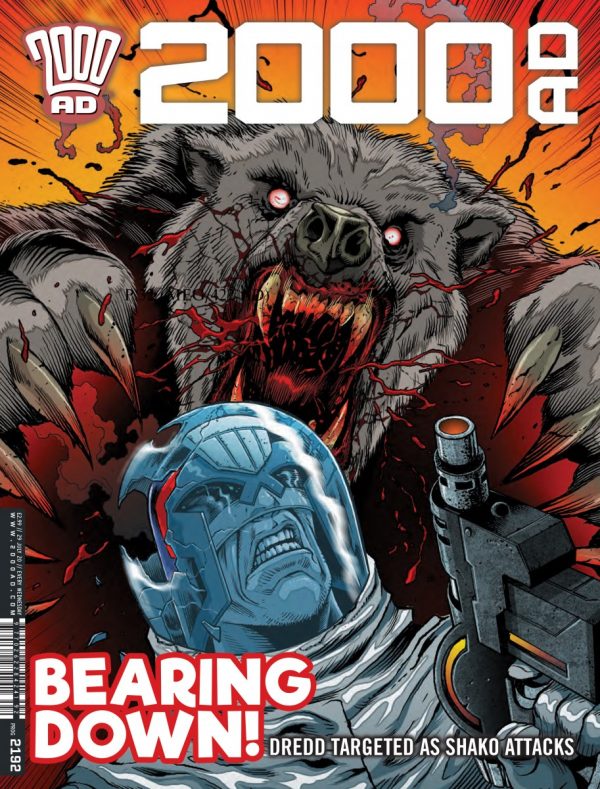 It’s Wednesday yet again, and The Almighty Tharg has graced the digital and retail world with yet another fun-fest of 2000 AD. Yes its that time of the week where I delve into the relms of the weekly Prog!

It’s still full steam ahead this week with Prog 2192. Dredd faces Pestilence and Shako in End of Days, The Luxine Knights strike in Full Tilt Boogie, Graveyard shenanigans with The Diaboliks, Important tidal charts in The Order, and rounding this week up, Cyd enters the battlefield in The Out.

Last week left Dredd in a bad way. This week its pretty much the same. With the Angel’s head laying on the floor and Ichabod down as well, its left to Dredd to battle Shako. Also with Pestilence’s plague now out in the wild, how does Team Dredd battle an unseen enemy?

Yes Shako is back…well sort of. His last outing was back in the Sci-Fi Sspecial where he was brought back by Dan Abnett and Richard Elson for a meeting with Gene Hackman. So for everyone’s favorite Polar Bear to now feature in a Dredd strip comes as a bit of a surprise. Don’t get me wrong – the inclusion of Shako works well and gives Pestilence a bit of oomph, but it kinda feels unnecessary and more of a forced cameo than an actual plot device.

As always Rob William’s script is quick and to the point, whilst Henry Flint does a brilliant job showing us what happens when Lawman meets (Zombie?) Polar Bear.

Finally the Luxine Knights and the Full Tilt Boogie crew come face to face. With battle lines drawn, Grandma has a cup of Tea and Horus plays games with one of the young Knights.

Full Tilt Boogie continues with its Saturday morning cartoon feel with both sides now meeting. We get to see the Black Dog in action as well as a bit more discontent within the Knights ranks. Whilst Full Tilt Boogie is close to its conclusion, Alex Di Campi and Eduardo Ocana continue to create a wonderful adaptation of the all-ages strip that is now at home in the weekly Progs.

Things don’t look good for Damien Dellamore this week. The Lothario finds himself locked up in a room with three husbands of his former conquests. The Polizia want to know what happened at the cemetery and if Damien doesn’t tell them then he is left to the trio of spurned Husbands.

Finally the Diaboliks meet the Lady of Vendetta Blessed Red Madonna. After a couple of weeks of build up we see the fruition to all of their plans. There is a couple of cracking double-page spreads from Antonio Fuso which show off the graveyard fight in all its might and are a thing of beauty.

Its great to see the Red Madonna in action and I wouldn’t imagine that bullets will do much good in bringing her down.

Things are heating up back in Strasbourg. Whilst Francis Bacon fights with the returning Armoured Gideon, The Master Enginner tracks the remaining heroes as they flee Philae-Delphia.

I completely lost what understanding I had of the plot this week. With Benjamin Franklin trying to save Simeon Webb’s tidal charts and a ginger robot person getting shot, it all got a little chaotic. I really want to see Kek-W and John Burns vision for The Order but at the moment its still not clicking as to what it is.

As the conflict with the Tankinar worsens, Cyd last week decided to head into the warzone to aid and document the relief effort. It’s a massive step that Cyd has taken and this week we see her step further into the conflict. Cyd and her relief-aid group are joined by a creature Cyd calls “Daddylack” – think of a giant armoured Panda and your not far off.

Dan Abnett continues hid world building of The Out as Cyd continues to document her travels. With the glitzy bars and fancy high-rises now replaced with buring tanks and ruined suburbs.

Rumors are circulating online about who or what the mysterious Tankinar are. A few of them come back to the Tankinar being Human. I’m hopeful that this isn’t the route that Dan Abnett has taken but the evidence is continuing to stack in the rumour mill’s favour.