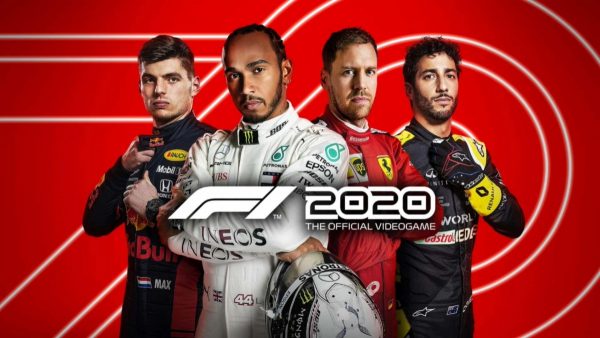 With the current season of F1 all but unrecognisable due to the ongoing global health crisis, Codemasters bring us F1 2020 – the game of the season that never was.

The inclusion this year of a new way to experience the career mode, and new features set on and off the track, ensure that F1 2020 improves on its 2019 counterpart in every way.

All 22 races of the intended 2020 season are here in all their glory, with the brand new Vietnam Grand Prix at Hanoi and the return of the Dutch Grand Prix at Zandvoort added to this year’s season. Also the 2019 F2 roster makes its welcome return and in turn builds upon it 2019 premiere. 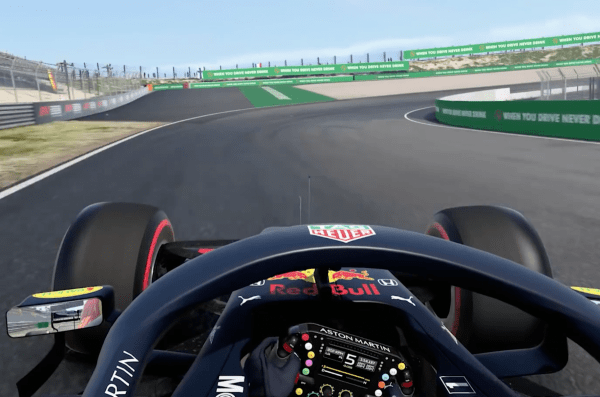 With the disrupted start to this season’s real-world championship, Codemasters have done a grand job of delivering a representation of this year’s Championship. With the updated liveries of McLaren and Mercedes not yet included, its these small touches that differ from the sport’s real-world counterpart. However there is some good news, as the new Williams redesign is currently included within the “base” game and Codemasters have said that updated liveries of Mercedes and McLaren will be added at a later date.

Using pre-season as a judge of each team’s performance there is some surprise front runners, with McLaren being top of this list. Completing the current top three teams is Ferrari and Red Bull. Codemasters has again mentioned that as the 2020 season rolls on that they will be updating each team’s performance based on real-world statistics.

Also, with a clever bit of thinking, these new performance updates can be added to existing saves. This means that we can choose add this new technical data to our career saves without too much impact to whats already been developed. 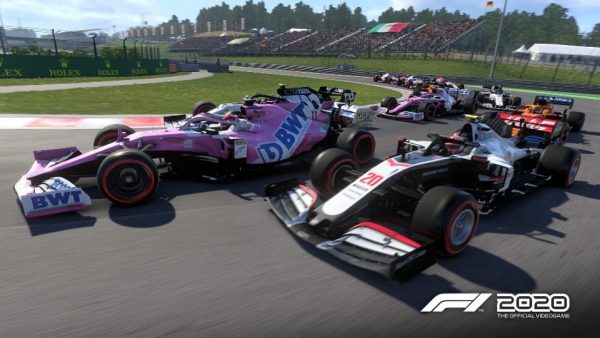 There has also been changes on how the cars perform out on the track in F1 2020. Braking has had a complete overhaul with the initial response being much sharper. The cars also feel less affected by weight this year and as such are more responsive overall. The ERS system has also had a complete overhaul and now works close to its real-world counterpart. With the majority of ERS now automated, we are given an ‘overtake’ button that when used overrides the automated functions and gives you full power. It’s a fun control and when used strategically can give you fast lap times and get you enough power to pass a tricky opponent.

The biggest new addition is the MyTeam mode. This new mode allows you to become the 11th team on the grid and compete in the Drivers’ and Constructors’ Championship. MyTeam allows you complete control over your created team. You will be oversee driver contracts and development as well as R&D, signing potential sponsorship deals, facility upgrades and car design. Whilst MyTeam is still very much a driving intense mode its addition moves ever closer to potentially having a management only mode in future instalments.

The traditional career mode is also included this year, and with F2 making its return we are offered a new way of starting our driving career. Choosing to start in Formula 2 gives you slightly more immersion, as how you perform throughout the season effects your potential deals when it comes to Formula 1. However if F2 isn’t your thing you can bypass this all together and jump straight into the top tier of F1. 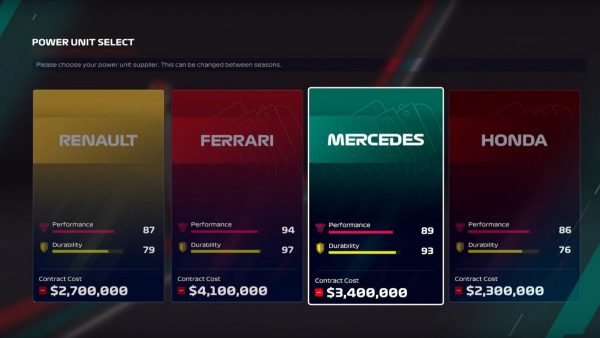 The full 22 race calendar is included in F1 2020 and completing a full season of practice sessions, qualifying and the Grand Prix its self can seem a bit of a grind. However, Codemasters has yet again used a bit of forward thinking and added the options to tailor your season to your own tastes.

If a 22 race season isn’t your thing you can choose to compete in a 10 or 16 race season instead. The beauty of this is that you can also pick what tracks are included. If you’re not a fan of the tight straights in Hanoi or the twisting narrow turns of Monaco then you can remove these from your season. It’s a clever option and allows for a fresh gameplay experience.

The only downside to a custom season is that whilst you can swap and change tracks at will, you cannot change their order. You will always race them in the order of how they are in reality – with Australia always being the opener, then Bahrain and Vietnam etc. It’s not a massive complaint but it would open up more variation to the seasons if the order could be hcanged.

Whilst online multiplayer is still as prevalent as always, F1 2020 introduces a split-screen multiplayer option. This marks the first Codemaster developed F1 game to do so. Two players will be able to race each other and the A.I.; adding split-sceeen is a fun way for those who don’t wish to dive into the somewhat often unsporting world of online racing, and as fun as racing solo against the A.I. adding a teammate makes the experience more enjoyable. 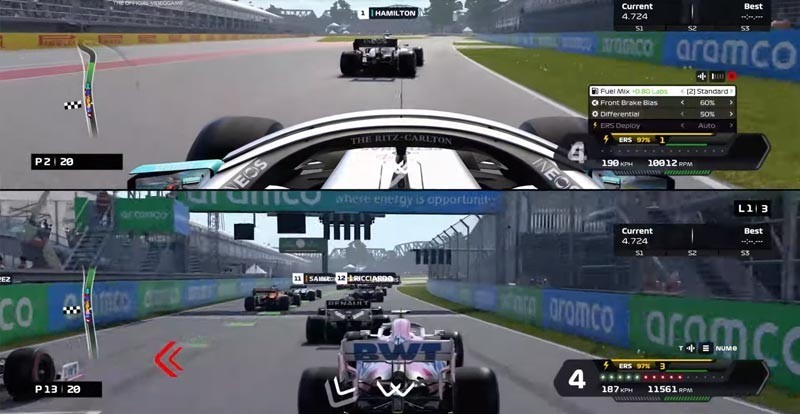 F1 2020 is also more accessible than ever. Whilst the series isn’t billed as a hard-core simulation there is a lot of mechanics that can make the game difficult for beginners or people with additional accessibility needs to pick up and play.

The new ‘casual’ handling option answers most of these needs and adds a range of extra options such as driving assists and making the car more durable if you happen to come off the track. Whilst not everyone will make use of the ‘casual’ controls, it is great that Codemasters has included it to make the game accessible for a wider audience.

Whilst there is a wealth of new additions this year, this sadly does not detract from certain aspects that make the game feel samey. The menu design is pretty much identical to F1 2019, albeit with a different style of font. Whilst the A.I. seems more capable this year, I fail to see how competing a full race in the wet Monaco streets could be accomplished without any mishaps. Whilst these aren’t major concerns they are little things that could be picked up upon and improved in future games.

The one big gripe that could become an issue is the inclusion of the Paddock Pass…yes, even Formula 1 now has its own Fortnite-style Battlepass.

The Paddock Pass works exactly like any other ‘Battle Pass’ where you can unlock various customisable liveries, helmet designs, suits and podium celebrations. Thankfully these are purely cosmetic and do not effect the core gameplay in any way.

With F1 2020, Codemasters has delivered a close to perfect digital representation of the Formula One experience. The core gameplay is fantastic and is a massive improvement over F1 2019. MyTeam is the biggest addition this year and pushes the game slightly into a management sim. With F1 2020 possibly being the final Formula One game of this generation, I’m looking forward to seeing what Codemasters brings to the PlayStation 5 and Xbox Series X.

Cons:
– Same old UI.
– Unable to change season running order.
– Does not have Rob (I’d settle for Robert) as an audio voice.

Reviewed on Xbox One X (also available on PC, PlayStation 4 and Google Stadia)