With the Souls-like genre continuing its never ending quest to take over the gaming world, it wasn’t going to be long before we were to see the genre get mixed in with a tactical RPG, and that’s exactly what Othercide is.

Developer Lightbulb Crew has done exactly that and created Othercide – a tactical turn-based RPG. The brutal punishing gameplay of any souls-like forces your skills to be constantly tested and forces you to learn and adapt through multiple deaths and restarts. Othercide sticks to this method but is inviting for players of any skill level to give it a go without being too difficult.

Othercide is set in a high fantasy monochromatic world filled with decaying cityscapes and monsters that want to destroy everything. The world is defended by an all powerful being known as The Mother and she has been at war for a very long time. With The Mother’s power finally at its limits she channels her strength into her warriors known as Daughters. These Daughters not only channel The Mother’s strength but they also become powerful in death by the recollection of The Mother’s own memories. Its now up to the Daughters to finally put an end to the Chosen One of Suffering before he destroys the world.

The narrative is a bleak one and the game does a brilliant job in showing this to the player. The Daughters only have a set number of days to defeat the Chosen One before the world-ending event known as the Suffering destroys all life. Each boss that you defeat only grants a few days of peace before the next one turns up and restarts the process. 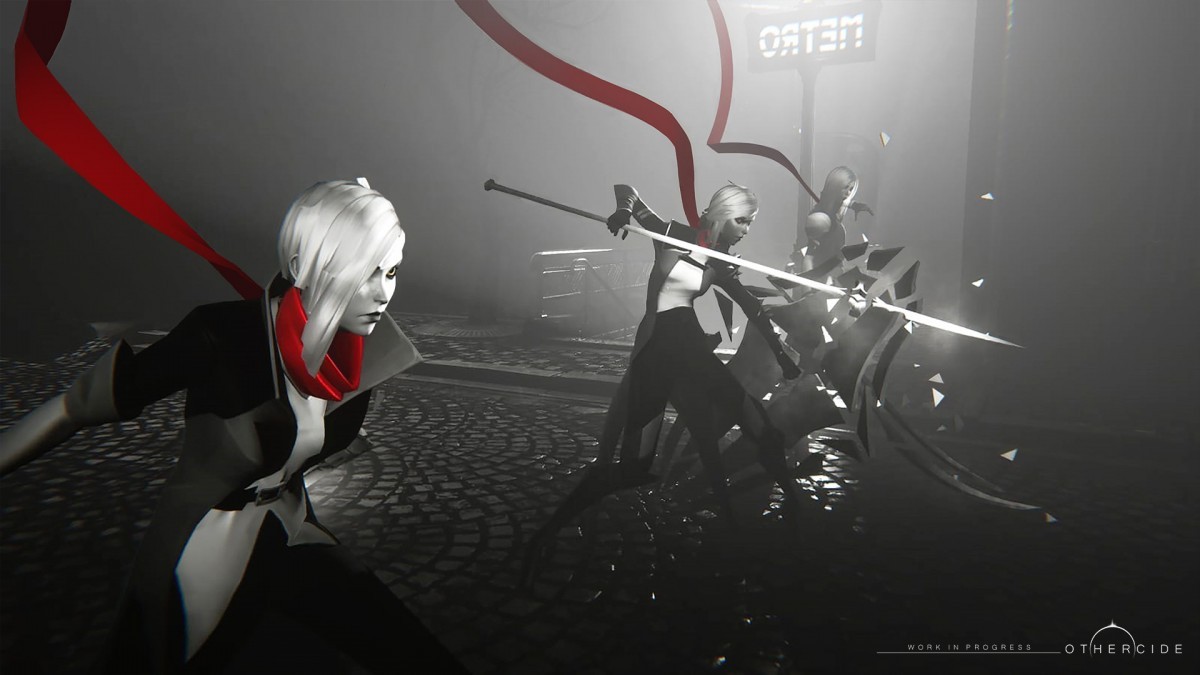 The main attraction to Othercide is its two unique features of revival and its dynamic timeline. Every time a character is defeated you are sent back to day one to try again. With restarting you keep your “remembrances” which are stat boosters. These range from skill boosts, damage multipliers or even free revival coins. We can also earn revival coins by rescuing Bright Souls from completing one of the game’s Rescue missions. These revival coins can be used to revive a dead Daughter. Once revived the Daughter keeps all of her level, skills and traits from before her death. This is helpful as it allows us to restart with at least one powerful Daughter in our team, as well as hopefully the tools to overcome whatever wiped us out the first time round.

The strategy element of Othercide is its Dynamic Timeline System. This system governs the battlefield and shows whose turn it is next. Not only do the enemies and the Daughters appear on the timeline, but their relative attacks do too. This give us room for a bit of forward planning when attacking a powerful enemy or showing when to go on the defensive. Movement and skills which take over 50 action points to use will push that particular Daughter further down the timeline which means that they will take longer to attack in the future.

We also have a range of abilities at our disposal and come in the way of Instant Delay, Reaction and Interruption. Each of these abilities also affects the timeline in various ways. Some abilities don’t activate straight away and more often than not you get ample time to either counter these or move out of range from the move itself. One of the Daughters can learn a shield bash skill which when used can move the effected enemy further up the timeline, which in turn means that they remain inactive for a longer period. 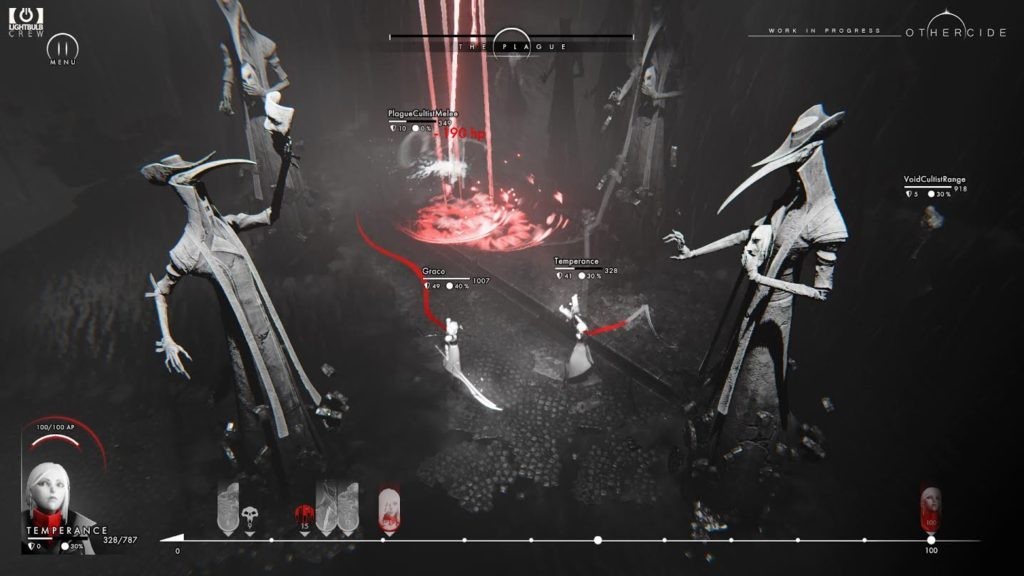 After each battle we are rewarded resources which can be used to buy additional skills and abilities. These resources can also be used to spawn a new Daughter or sacrifice another Daughter to heal a wounded one. This in itself is another strategy element as lower level Daughters can not heal another who is of a higher level. It’s best not to pick a favourite or over develop one Daughter from another as death is always just around the corner.

As mentioned before Othercide has a unique way of aiding players who have a particularly hard time or encounter a few lost battles. This comes in the form of “recollections”, “memories” and “traits”. Recollections are earned for battles and deaths, whilst memories improve a certain skill that the Daughter has. Traits are the most interesting one and are assigned at random to Daughters based on their battle performances.

One of these traits is called “arrogance” and is assigned to a high damage-dealing Daughter who also happens to not get damaged herself that often. What arrogance does is it increased damage dealt, but drastically lowers any experience that that Daughter receives. This is a clever way to give each Daughter their own personality, however as the game goes on you do get to see the same trait assigned to multiple Daughters. 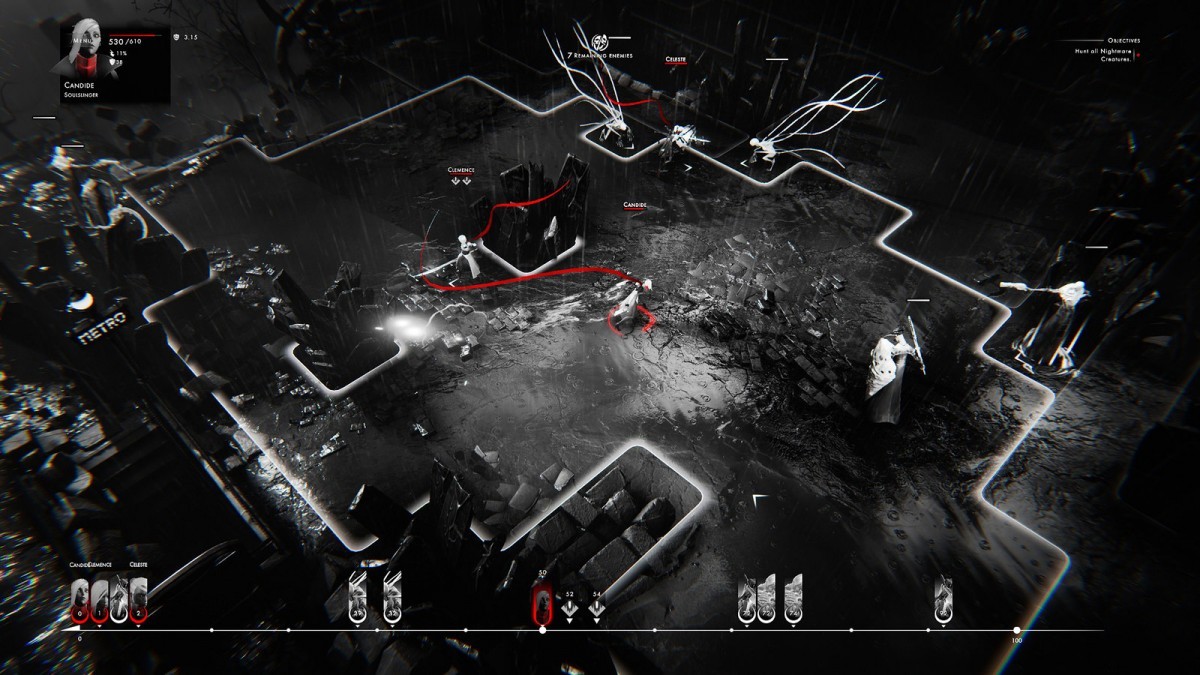 The spoken dialogue and cutscenes are very well done but can become repetitive after a time. As the very nature of Othercide is to battle, die and repeat, there are often times when you will encounter the same cutscene or dialogue multiple times. Whilst not necessarily a bad point it would be nice if there was an option to skip these scenes. Another issue is that some combat options can be a bit confusing as to what they do. There are certain abilities that when selected only show a slight camera adjustment or just a range box. Whilst not game breaking it can be frustrating at times.

Othercide is a unique take on the “souls-like” genre. It give us a unique experience filled with strategic gameplay and difficult combat. Its monochromatic theme stands out from other titles in the genre and its high fantasy setting works wonders with the overall narrative. Whilst Othercide won’t be everyone’s cup of Tea, it’s one that fans of XCOM and Dark Souls should definitely look out for.

Cons:
– Reptative dialogue.
– Some confusing combat options.
– Some traits can be seen multiple times during one run.