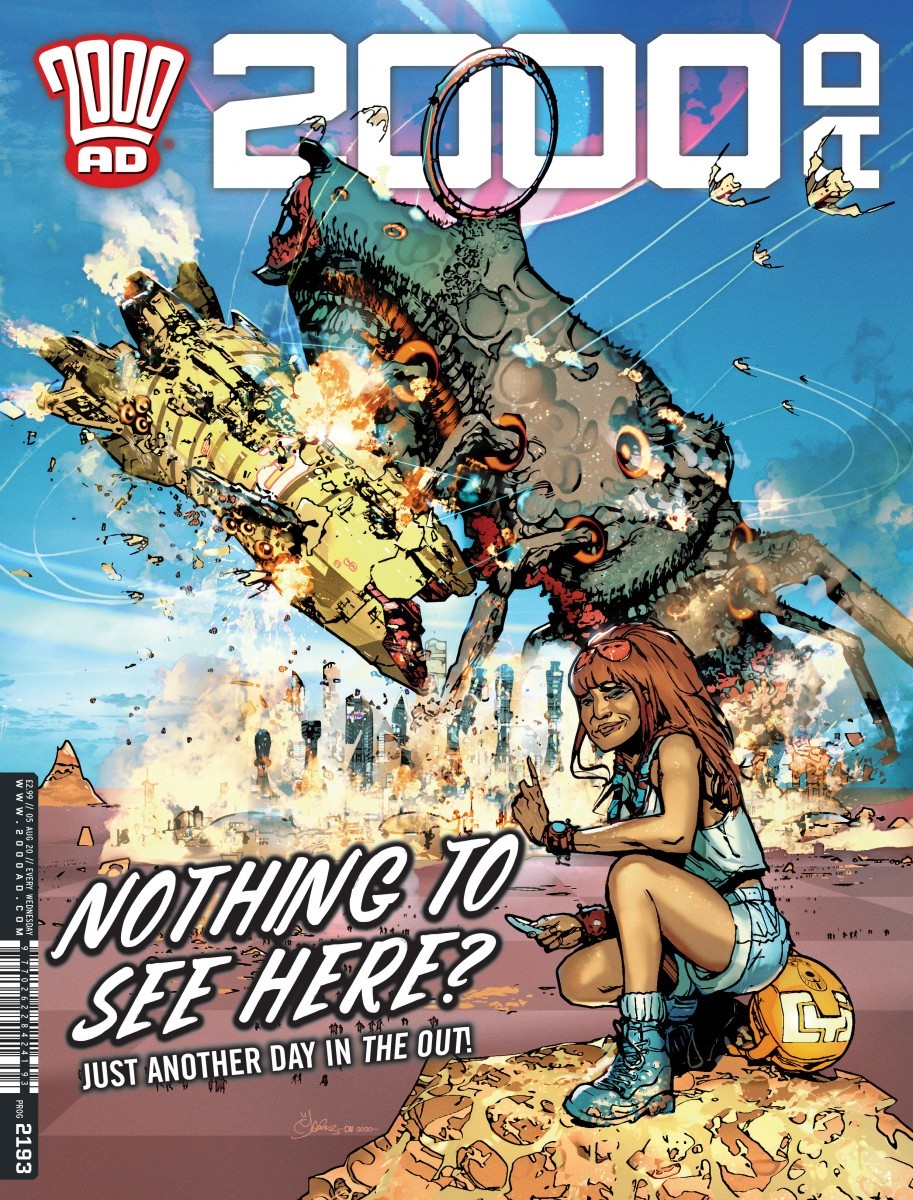 Tharg returns to Earth yet again with another weekly installment of 2000 AD goodness. This week’s Prog 2193 steps up to the plate, and brings with it more continuations and a pausing of sorts…

It’s all systems continue this week with Anderson and Patrick Vs. The Plague in End of Days, Prince Ifan shows his true colours in Full Tilt Boogie, Damien Dellamore get grilled in The Diaboliks, Antoine Berg takes on Francis Bacon in The Order, and again wrapping this week up is Cyd’s adventure in The Out.

With Dredd still out for the count after his battle with Shako, Anderson takes the hot seat as she sets out to contain Pestilence’s deadly plague.

It’s another quick conclusion with plenty of talking points. Many of which revolve around Anderson’s ability to psychically manipulate a plague?! It’s a strange one and isn’t explained at all. My only gripe is that Anderson could of stopped it all once they bombed the Ice Breaker way back in #8 and then channelled it into Pestilence or even Shako…

Anyway, that leaves us with 5 more issues with two horsemen yet to go. The ending to this week’s episode alludes ever more to Dredd being Death, however I still think Rob Williams will go down a different route all together.

Prince Ifan shows his true colours this week. With the Luxine Knights battling between themselves, Ifan does a little back-stabbing and attempts to claim whats rightfully his.

It goes a bit into Game of Thrones territory this week with fractured loyalties and greed. It’s also been interesting to see Prince Ifan go from the scared Prince to Megalomaniac, the seeds to his actions being sowed way back in #2.

As always Eduado Ocana’s art work shines and his clear lines perfectly capture the cast’s emotions and expressions. Alex Di Campi’s writing has also allowed the story to flow from issue to issue and Full Tilt Boogie continues to be a brilliant read.

Damien Dellamore is still locked up and under interrogation by the Italian Polizia. We join the lovable Lothario as he recounts Jennifer’s demonic fight with the Lady of Vendetta, Blessed Red Madonna.

The Diaboliks comes to an end of sorts this week. Whilst the strip will continue again in Prog 2197, the duo’s Italian adventure is over. It’s been a decent first half which has seen the pair of Ex-Caballistics Inc leave a trail of destruction across Italy.

Both Dom Reardon and Antonio Fuso’s art has stood out from the start with both artists’ clever use of black & white and scratchy style. Whilst Gordon Rennie’s story hasn’t fully come to fruition, this first part ends on a pretty decent cliff hanger and sets up the next adventure perfectly.

Francis Bacon and his mechanical army attacks the Ghost Realm of  Philae-Delphia this week. The mechanical menace sets his sights on the half-wurm Antoine Berg – for some apparent reason, that’s not been mentioned in the last 9 parts.

The Order is still a beautiful chaotic mess of characters and plot points. I hope every week that it clicks and I see Kek-W and John Burns vision. Sadly The Order continues to wash over me in a sea of fantastic John Burns art. Maybe next week?

We join Cyd again back on Orlap as part of the volunteer aid task force. Cyd’s finding life tough with the warzone constantly being in the distance. That is until the distant gun fire stops and the elusive Tankinar finally arrive.

The Out continues to be the crowning jewel of the Progs. Dan Abnett and Mark Harrison have crafted a wonderful story that has been full of wonder, excitement and now dread. With the Tankinar finally on Cyd’s doorstep are the many questions about this mysterious enemy about to be finally answered?