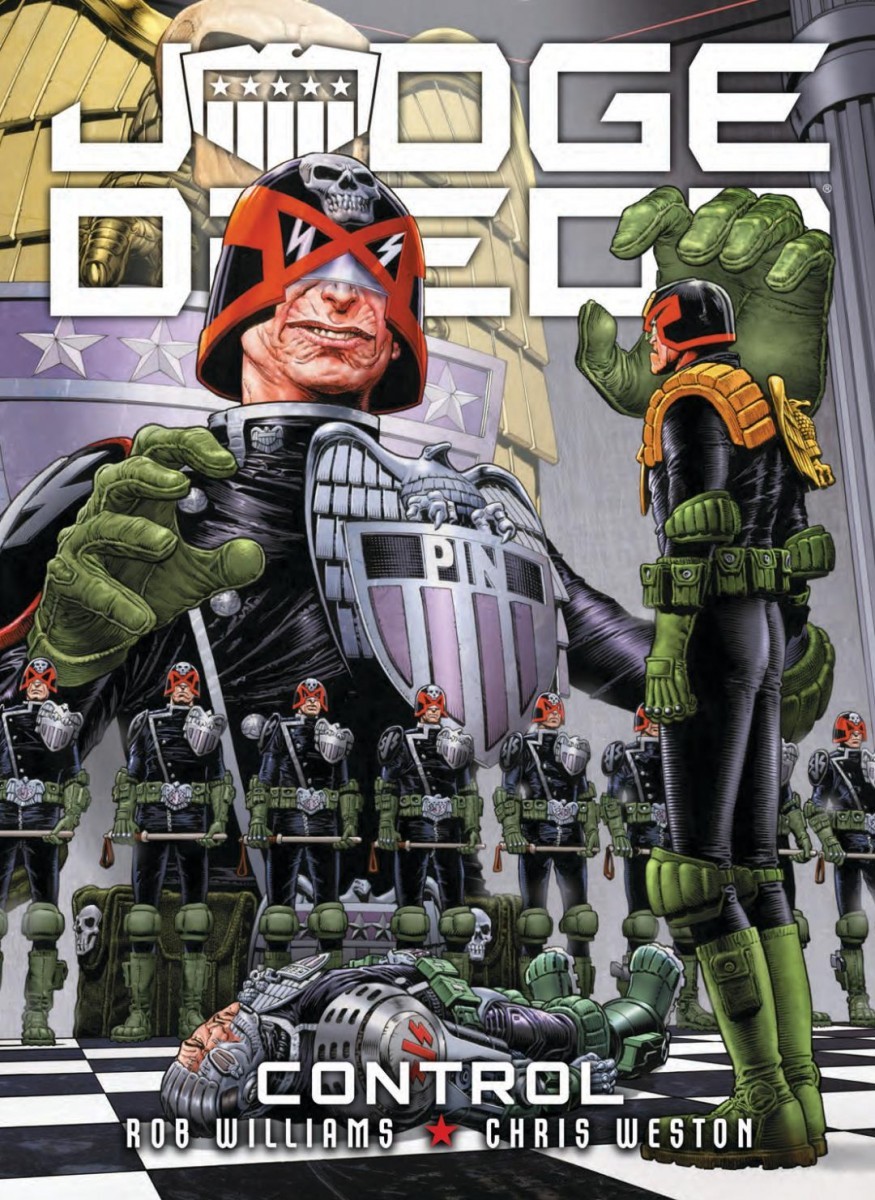 There is a serial killer on the loose in MC-1. However this time the killer is a Judge, but not just any Judge. Psychopathic SJS Judge Pin is murdering any Judge that does not live up to her high expectations, and now she has Dredd in her sights.

An SJS Judge as a serial killer is a chilling thought. Someone who is meant to be in charge of the Judges, who happens to be so wrapped up in upholding the law that she systematically murders those who she deems unfit to wear the badge.

Judge Dredd – Control is a three part story that is made up of The Fields (Prog 2035-2036), Fit For Purpose (Prog 2073-2074), and Control (Prog 2141-2145). Seasoned Judge Dredd writer Rob Williams is at the helm of this one and he crafts a shocking tale of an SJS Judge turned psycho. As with a lot of Williams’ previous work the slow narrative build up really plays into the readers hands, and makes that final execution all the more effective.

Knowing that SJS Judge Pin is the killer from the offset in no way spoils the story. We see Pin for who she really is within the first episode but its’ the way herself and Dredd assess each other and Dredd’s determination that makes this a superb read.

As the three part story unfolds, we get insight into Pin’s psyche. Seeing how events in her life have unhinged her, she truly believes that what she’s doing is the right course of action. Pin’s behaviour within the story does great at showing just how thin of a line the Judges walk between right and wrong.

Control also features a depth of characters pulled from previous Judge Dredd tales. SJS Judge Gerhard and Judge Maitland who formed part of Dredd’s inner circle in The Small Houseare both featured prominently. Its almost a tale of Dredd, Gerhard and Maitland, as the trio all get a fair share of “screen time”.

Judge Gerhard has a fairly interesting arc throughout Control, and its fascinating to see the inner politics of the Justice Department and the SJS Judges at work. Corrupt or not…

Williams has the wonders of Chris Weston to illustrate his Dredd through out this graphic novel, with the artist delivering consistently fantastic work through out. There is a small flash back to Dredd of old where a memory of Pin is played out in the old 2000 AD style of black and white. It’s small touches like this that makes Weston’s art just as effective as Williams script in conveying Pin’s decent into madness.

Williams and Weston continue to team up as they explore more of Mega-City One in the novel’s second half.

The best of these self contained tales that make up the second part is The Heart is a Lonely Klegg Hunter which features the return of Sensitive Klegg. This one had me laughing quite a lot as Sensitive Klegg struggles with every day life in MC-1. When his previous employer – Overdrive Inc put out a contract on him. Klegg soon finds himself on the run from the Hunters Club. Fans of old will remember Sensitive Klegg and Overdrive Inc. from the fantastic Trifecta storyline from a few years back.

There are other brilliant Dredd story’s at play as well. Boxing Day sees the citizens of MC-1 bribed with free money to ‘behave’ over Christmas and Mutant Chimpanzee’s attack the Poshtube in Elevator Pitch. Chris Weston takes over writing and art duties for the last two stories with The Death of Dan-E Cannon and Cadet Dredd vs Grudzilla. Both are brilliant reads which see Dredd pitted against an malfunctioning orbital defence platform, and Cadet Dredd against the monstrous Grudzilla.

Dan-E Cannon must be an intentional pun by Weston as Danny Cannon was the director of the ill-fated Sly Stallone Judge Dredd movie. Its also great to see Cadet Dredd vs Grudzilla included as it shows that the special Regened Progs can stand on their own in terms of appealing to the older reader.

Williams and Weston have delivered a fantastic 130 pages of ‘classic Dredd’ in Control. With the tale of SJS Judge Pin and even the inclusion of Sensitive Klegg, this is one worthy of being in anyone’s comic book collection.