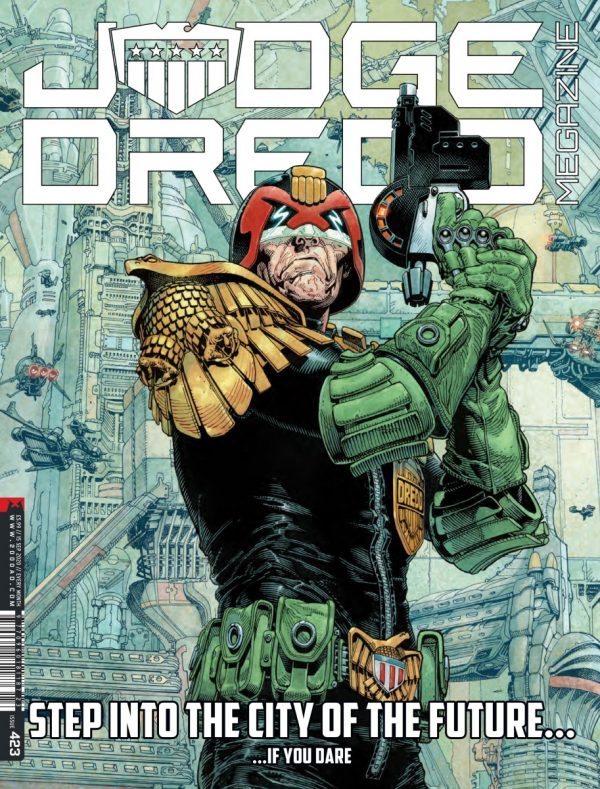 It’s a double-whammy of 2000 AD this week as not only do we get Prog 2195 we also have this months Judge Dredd Megazine #423 hitting the retail and digital bookshelves.

This month’s lineup features more Dredd in Grand Theft Royale, we delve once more into the Black Museum with The Obsidian Ingress, Devlin Waugh returns in When I was a young Demon and finally wrapping up this month’s Megazine is Marshall Lawson and Boom Town.

This one on the surface looks like a ‘done in one’; however it is actually a continuation of the Orlok and Red Prince storyline that was last seen back in Megazine #409’s The Red Queens Gambit.

The Red Prince is now in the “care” of the Justice Department. I use the term “care” loosely as Mega-City One’s finest quite literally analyse him psychically and psychologically to determine what he’s all about.

Arthur Wyatt and Jake Lynch have done a good job with this tale which essentially acts as an interlude to move the Red Queen story along. It’s a great tease at whats to come and a nice filler strip to boot.

The Black Museum: The Obsidian Ingress

Following on from last month’s The Cackle, we delve into another tale of weirdness from Mega-City One’s Black Museum. This time its about The Obsidian Ingress – a peculiar death cult that working a possession ritual out of a dead Judge’s helmet.

David Baillie’s tale is an excellent piece of tongue in cheek horror. These tales from the Black Museum are a great divergence into Mega-City One life and are often a stark contrast to Dredd’s more glamorous adventures.

Devlin Waugh: When I Was A Young Demon (I Did A Really Bad Thing)

Devlin Waugh is back for another single issue adventure and this time Devlin’s yet again lost his trousers but for a good reason this time.

It’s a double episode this week for Marshal Lawson as we say goodbye to Boom Town. As an ending to the current Boom Town story we get a catch up with the main cast. It’s a nice way to say goodbye and a little tease to whats next for the colony.

SJS Judge McClure makes a bad move with her dealings with Brotherly and the toxin as Brotherly talks her into holding a town election, Nerys shows her appreciation to Lawson with her understanding of the Law. Rondo also continues to battle with his inner demons as his struggles with temptation come to a head.

Dan Abnett does wonders with exploring the human side to his characters and its now different in Boom Town. Its been a wonderful journey and in hoping we see Marshall Lawson and the inhabitants of Badrock in the near future. Its also worth noting that throughout the Boom Town arc, Phil Winslade’s art has been phenomenal and how someone can pack so much detail into his scenes is incredible.