THE MAN WHO LAUGHS, one of the most iconic and influential silent films of all time, is available for the first time on Blu-ray in the UK from 17th August 2020 as part of Eureka Entertainment’s The Masters of Cinema Series, and we have three copies to give away! Read on for details of how to enter… 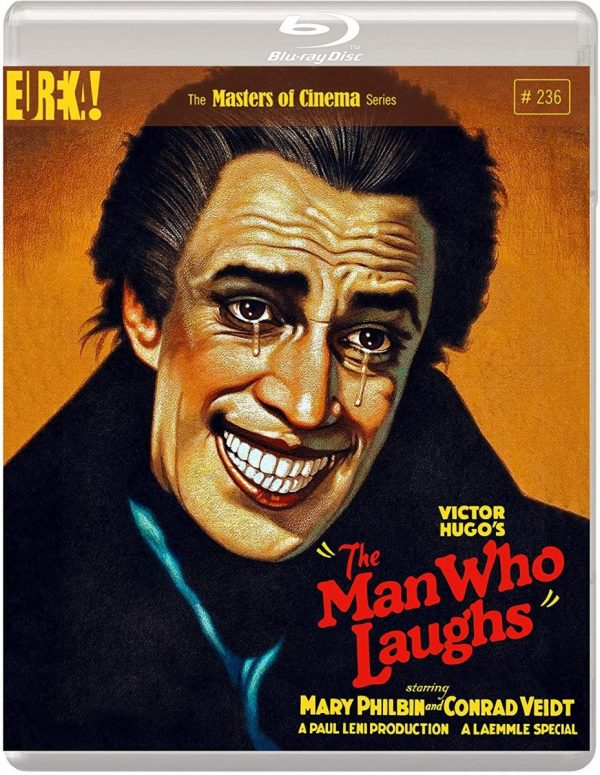 One of the most visually striking of all the later silent films, The Man Who Laughs reunites German Expressionism director Paul Leni and cinematographer Gilbert Warrenton from their horror hit the previous year, The Cat and the Canary (1927). Both films are often considered to be among the earliest works of legendary horror classics from Universal Studios, yet the undeniably eerie The Man Who Laughs is more accurately described as a Gothic melodrama. However, its influence on the genre and the intensity of the imagery—art director Charles Hall and makeup genius Jack Pierce would go on to define the look of those 1930s Universal horror landmarks—have redefined it as an early horror classic, bolstered by one of the most memorable performances of the period.

Adapted from the Victor Hugo novel, The Man Who Laughs is Gwynplaine (an extraordinary Conrad Veidt), a carnival sideshow performer in 17th-century England, his face mutilated into a permanent, ghoulish grin by his executed father’s royal court enemies. Gwynplaine struggles through life with the blind Dea (Phantom of the Opera’s Mary Philbin) as his companion – though she is unable to see it, his disfigurement still causes Gwynplaine to believe he is unworthy of her love. But when his proper royal lineage becomes known by Queen Anne, Gwynplaine must choose between regaining a life of privilege, or embracing a new life of freedom with Dea.

The startling makeup on Veidt was the acknowledged direct inspiration for The Joker in the 1940 Batman comic that introduced the character, and film versions of The Joker have been even more specific in their references to Leni’s film. While The Man Who Laughs contains powerful elements of tragedy, doomed romance, and even swashbuckling swordplay, its influence on horror cinema is most pronounced. Leni died suddenly at the age of 44 a year after this film (with Veidt also unexpectedly passing away too soon in 1943), and The Man Who Laughs endures as one of the most haunting and stylish American silent films, made just as that era was coming to a close. The Masters of Cinema Series is proud to present the film on home video for the first time ever in the UK.

The competition closes at midnight on Sunday, August 30th. UK readers only please. To enter, use one or more of the following methods…