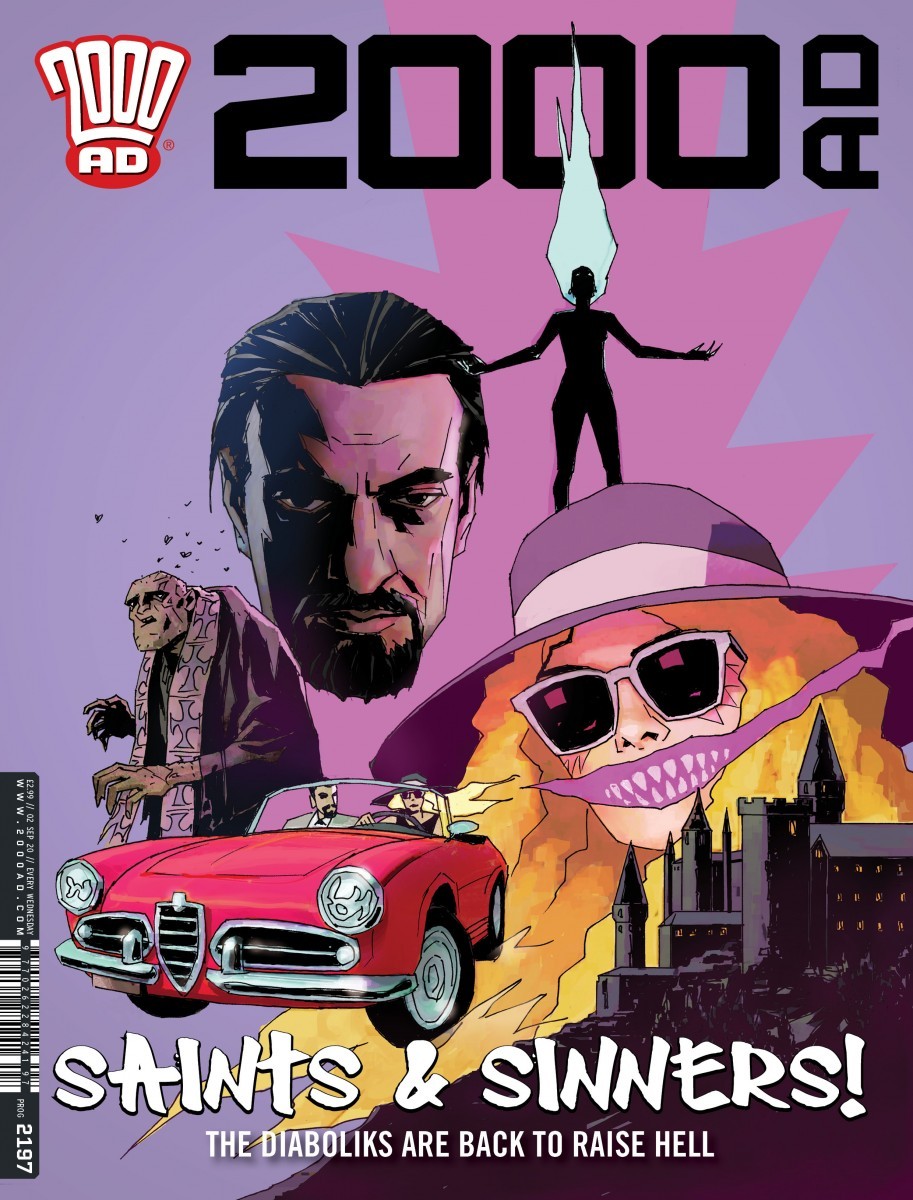 After last week’s trip into the realm of the Regened All-Ages Prog, this week we are back to normal with Prog 2197. As we draw ever closer to Prog 2200 it’s now filler time for the next few issues. But as fillings go, this is good!

So on with the show…this week Team Dredd venture into space in End of Days, we get some quality time with Cyd in The Out, Dial M for Murder with another Futute Shock, mysteries abound with the start of another Tharg’s 3Riller, and finally this week Jennifer and Soloman return in The Diaboliks.

Things start to draw to their conclusions this week. We have three episodes to go and one Horseman left to defeat. With last week’s revelation that Death awaits them on the Moon, Dredd and Co. head off to confront Death head on (no pun intended).

There is a mighty big revelation during this episode and its one I guessed way back in my review for Prog 2193, so with that I’m off for Psi testing! Without going into spoiler territory, the Moon is on the move and Ichabod’s mission has been revealed.

With only a few issues left I’m getting the feeling that this epic will then move straight into another epic as how do you come back from that revelation? Rob Williams I bow my hat to you good sir!

This week comes yet another big revelation as we find out why Cyd decided to venture into the Out all those years ago. With Cyd adjusting to life in her new body she’s booked in for a therapy session with the most charismatic therapist ever. With an opening line of “So why’re you so farked up, hnmh?” what more do you need to say? However she does wonders in getting to the bottom of things and Cyd opens up as to why shes ventured out into the Out. It’s a touching moment filled with sadness and loss, that also does wonders in building Cyd’s character and is a testament to Dan Abnett’s writing.

I say this every week and I will continue to say it till I’m blue in the face: “The Out is the best thing in the Prog at the current time”. Its been that strip that seems to have united the reader base and you only have to follow 2000 AD on social media to see the evidence.

I’ve been a bit fan of Dan Abnett and Mark Harrison’s space epic from the get go. With a character such as Cyd Finlea giving us just a bit more mysticism each week and then the ominous threat of the still mysterious Tankinar, right to the shocking ending of part 7. The Out has been an absolute joy to read and rightly deserves the praise its getting.

There hasn’t been a murder for 30 years – until now. 2019 writer talent winner Liam Johnson and Steve Yeowell bring us a tale of murder and robot workforce all centered around A.I. entertainment.

The victim is Ilan, the creator of an AI entertainment system that revolutionised the world, a Robot force to carry out humanities work and then leading into becoming six-time President of Earth. So why is he dead?

Its a nice little tale that’s all done in four pages. Steve Yeowell takes us through a black & white visual fest in this one which is a pleasure to see and helps to different this Future Shock from his work with Sinister Dexter.

We find ourselves in Paris in 1899 and Inspector Alphonse Mucha gets a tip off that Lady Sofia Corundum has been murdered… But then it all turns on its head as a bottle of Saphir gets opened and the Inspector isn’t in Paris anymore. Cue sci-fi madness and Alien caverns as this 3riller moves on.

David Roach is back on art duties for this 3riller and its great to see his art brought to life by Peter Doherty’s pallette for Lady Sofia’s resting place and the mysterious planet.

The Diaboliks: A Crooked Beat – Part 1

Jennifer and Soloman are back! But more so, so is Dom Reardon!

The ex-Caballistics are continuing their work with the Malleus, and in destroying the Malleus’ demonic enemies the couple hope to keep the Malleus off their own backs. Why? Well, Jennie is possessed by a demon and they also have a hidden demonic child.

Gordon Rennie once again teams-up with Dom Reardon who makes his welcomed return to The Diaboliks. Although nothing was wrong with Antonio Fuso’s work. It’s great to see Reardon back doing his thing!