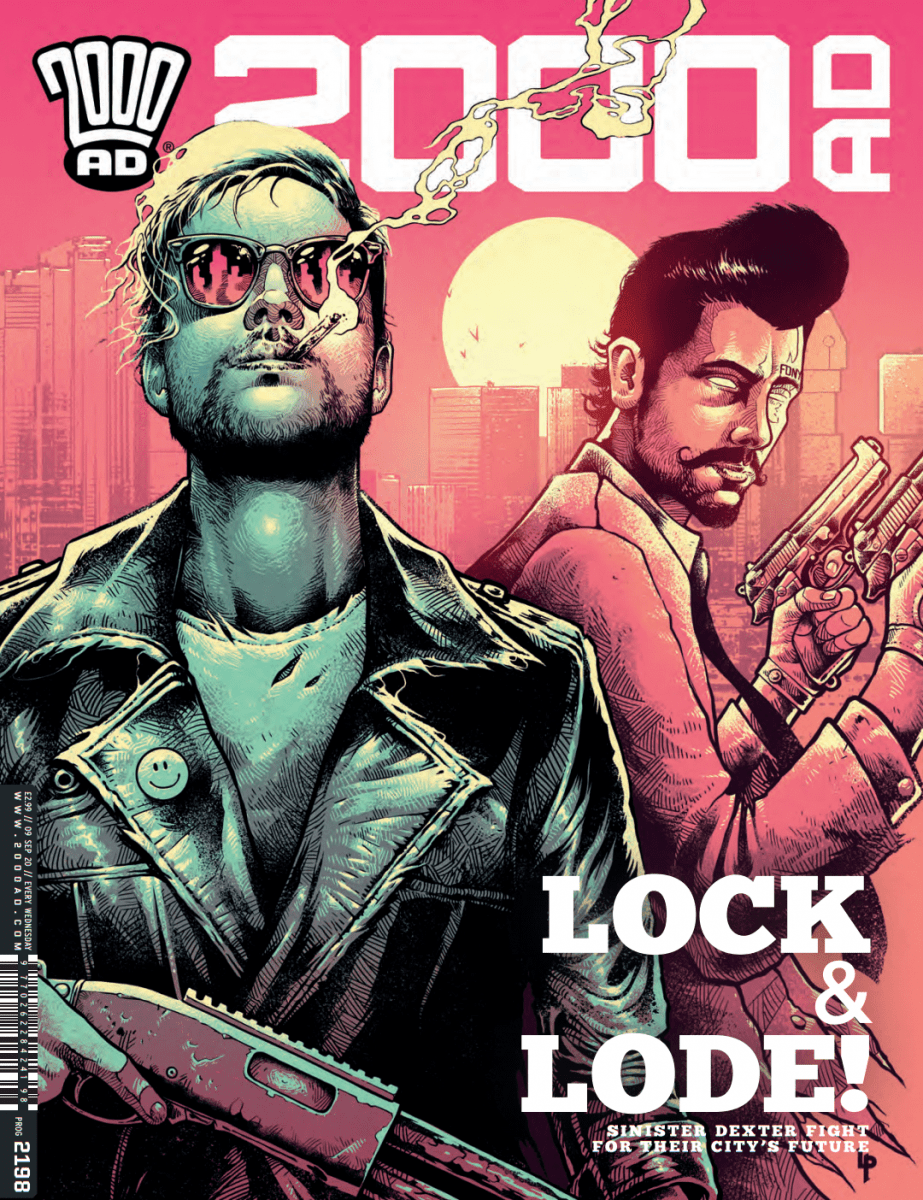 With Prog 2200 looming over the horizon we’re still in filler territory this week, and with End of Days, The Out, Tharg’s 3rillers and The Diaboliks coming to an end over the next couple of weeks, 2200 is going to bring with it a sense of new beginnings as such. But until then…

It’s all kicking off on the Moon in End of Days, Cyd ponders life in The Out, things get weird in the second part of Tharg’s 3rillers – Saphire, Downloade’s finest return yet again in Sinister Dexter, and ending this week is more demonic trouble with The Diaboliks.

Well we all knew it was going to happen and bang! Rob Williams hits us with Dredd being Deaths vessel. I was still shocked even though I saw it coming a mile off – as did everyone else. My hat is still off in credit to Rob Williams as the pure shock of Dredd/Death’s actions in this episode I didn’t see coming!

This week it falls to Team-Giant to try and stop Dredd/Death from destroying Earth with the Moon. There’s plenty of shocks still to come this week as Dredd/Death wrecks havoc on the lunar surface. It’s all leading up to go one of two ways: a rushed conclusion, where the natural state of the world is restored in a single cell, or a jump into another epic such as Block Mania / Apocalypse War. Time will tell…

Cyd’s therapy session is over and we now know why she’s spent so long in the Out – she’s looking for her missing daughter. The Out has been an emotional roller coaster and the reveal of Cyd’s daughter was done with skill and grace.

It’s another cleverly written piece by Dan Abnett and goes to show why The Out is getting all the praise that it is. With this first outing for Cyd Finlea drawing to its conclusion, hopefully shes back in the weekly Progs asap with a second outing.

We swap Paris for a cave full of Carrion-Men as Inspector Alphonse Mucha continues to investigate the (apparent) death of Lady Sofia Corundum and the Blue Saphir.

With Kek-W and David Roach behind the wheel this 3riller feels like a French detective noir mixed with Lovecraft. It’s daft and at times a little bit crazy -not that I’m complaining! To top it off Lady Sofia just happens to be in the clutches of Jacob Rees-Mogg! Yes, the poster child of British Tory entitlement translates wonderfully into this 3riller as the big bad, and hopefully he gets his just deserts in next week’s finale.

The gun-sharks are still hunting the Rogue A.I. that’s attempting to take over Downloade. This time round they have teamed up with Sinister’s ex-wife Carrie Hosanna (who doesn’t remember him due to the timeline reboot) and Billi Octavo.

Billi has found one of the Rogue A.I.s creators and has him captured in the Ghostlands, a new development that’s not yet connected to the rest of Downloade. This time around its Dexter who gets a blast from his own past as Billi has hired a Private Investigator who happens to (unknowingly) know Dexter.

Its hard to see where Dan Abnett is going to take Sinister Dexter as this feels a lot different to Steve Yeowell’s work on the strip previously.

The Diaboliks: A Crooked Beat – Part 2

The Diaboliks finally meet punk rocker and potential crooked beat of the title – Jake Pazuzu. Jake is running from the Deus Vult, a more offbeat version of the Malleus, that the Malleus themselves shy away from. With Deus Vult hot on Jake’s heels he wants in on the deal that Jennie and Solomon have with the Malleus.

I’ve really enjoyed The Diaboliks as of late. Gordon Rennie and Dom Reardon both do a fantastic job of letting the strip flow along each week whether it be Rennie’s writing or Reardon’s fantastic sketchy art. With A Crooked Beat set to end next week its difficult to place an ending to this one.