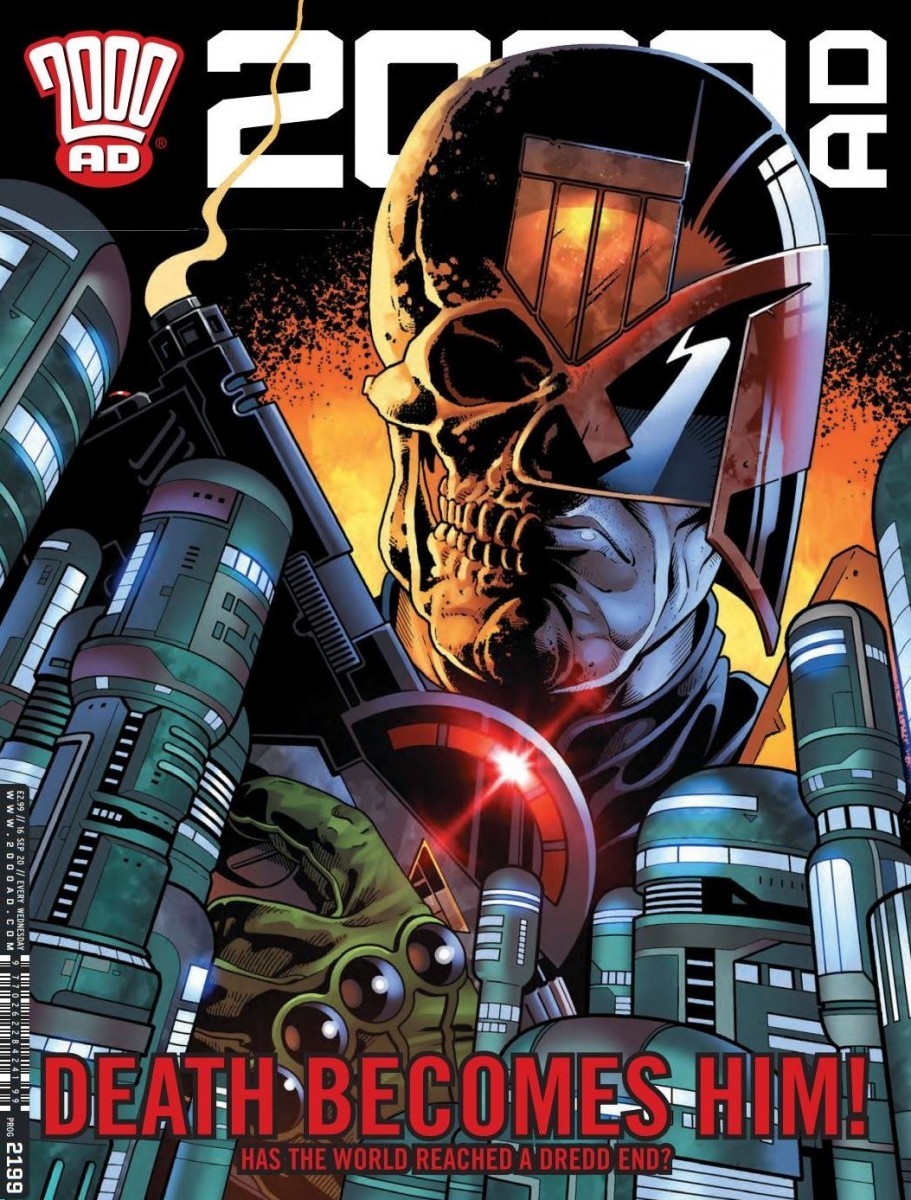 One week out from Prog 2200 its time to clear house in preparation of its arrival. With Prog 2200 being the next jumping on issue everything apart from Sinister Dexter is coming to an end, and what a ride the last few weeks have been.

Can Giant and the Sov’s save the day in the finale of End of Days? Team Diaboliks get to it in The Crooked Beat, it’s a bye for now to Cyd in The Out, Paris meets Rees-Mogg-alike in Tharg’s 3rillers Presents Saphir, and we say goodbye to Prog 2199 with another visit to Downloade in Sinister Dexter.

Here it is after fifteen long weeks the finale to End of Days is here, and what a roller coaster ride its been. From the high points of Brit-Cit’s Famine and Shakos return to the low points of every Horseman being dispatched in less than epic ways, End of Days has been that ride I sadly won’t queue up to ride again in a hurry. That’s not to say that its bad as its far from that but at times it has felt a bit rushed.

Following on from last week’s revelation that old Joe Dredd is Death and the havoc that caused the team, we get to see Giant go toe to toe with Death, and some time travel business with Anderson.

With the End of Days story leading into Prog 2200 with Carry The Nine, I would imagine Rob Williams has a few more surprises for us up his sleeves for us and hopefully with Carry The Nine continuing the story we will get a complete and satisfying ending.

Jake Pazuzu seemingly joins the gang as they attempt to take on the Deus Vult.

And with that A Crooked Beat comes to an end. This one hardly got going for me to get into, but we do get three pages of art work by Dom Reardon in all of its scratchy black and white glory. Hopefully when the Diaboliks return Gordon Rennie’s tale gets more time to shine and we get to see the Ex-Caballistics take the fight to the Malleus…

Well with the Rees-Mogg-alike setting his monstrosity on Paris its down to Inspector Alphonse Mucha to save the day and hopefully to return again – just not in the Order (wink, wink).

Ray and Finn continue their quest to defeat the AI that’s slowly taking over the city of Downloade.

This week the makeshift gang of Finn, Ray, Carrie and Billi attempt to tie up loose ends with the discovery of the AI’s designers. The Tattooists discovery was by a PI that Billi hired who also happens to have ties with Ray, in another life.

Then there’s a twist that blows the whole Sinister Dexter story on its head. Who knows what direction the story is now going into but here’s hoping that it’s full of wide reaching consequences rather than a small blip in the proceedings.

Twelve episodes and its done. We sadly have to say goodbye to Cyd Finlea this week and its going to be tough to see her go. The whole strip has been a pure delight to read and its easy to see how its being compared to Halo Jones.

This week we get yet another talking heads episode as Cyd packs her bag ready for her next adventure. Did I mention that her bag is sentient? We get some great to-and-fro with Cyd and her rucksack taking us through the last few weeks events. Much to Cyd’s suprise and embarrassment the Bag has seen a fair few moments of Cyd’s private life that both would soon forget.

From the get go, Cyd has been a special kind of hero. One that like us is looking in on the events happening on the page. Dan Abnett and Mark Harrison have delivered a consistent tale full of loss, hope and regret. With the revelation that Cyd ventured into the Out in a futile search for her missing daughter, we now have our reasoning for a second chapter.