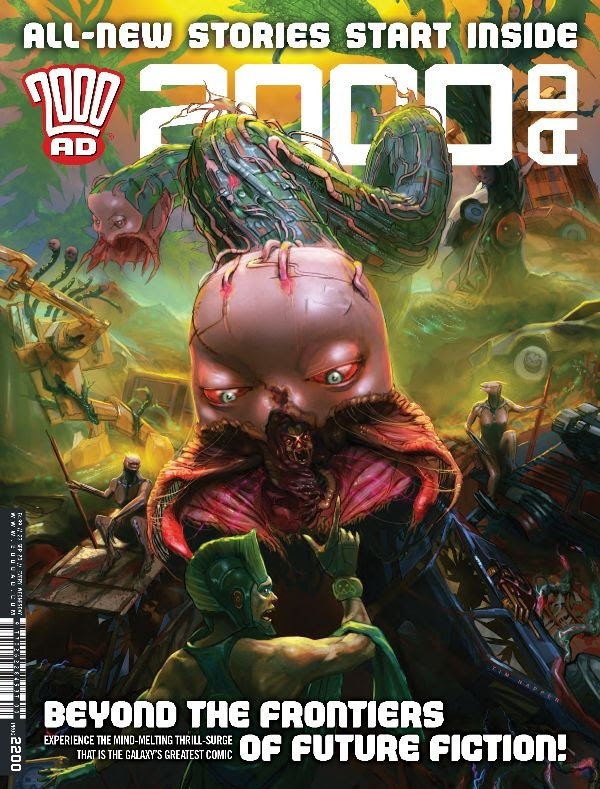 We’ve finally reached Prog 2200 and with it everything is (sort of) new. These jumping on issues are great for new readers to get a taste of everything that Tharg has on offer, as well as previous readers to get reacquainted. With the majority of the previous storylines ending throughout the recent weeks, Prog 2200 is a rebirth of sorts with a new line up for us.

We move on from End of Days in Judge Dredd: Carry the Nine, Treasure hunters descend upon a dead world in Future Shocks: Omnidetectorists, we stay out of the water in fear of Hook-Jaw, Downloade’s finest reach breaking point in Sinister Dexter, it’s Nolan Blake… babysitter? in the return of Skip Tracer, and rounding this week off is another demonic tale with Stickleback: New Jerusalem.

After the lackluster ending to End of Days, Dredd is back dealing with the aftermath in Mega-City One.

It’s mostly politics this week as we learn that stopping the impending apocalypse has drained a lot of Mega-City One’s resources. It’s down to Judge Maitland to weigh up what the Justice Department spends its credits on. And when the decision boils down to Education or Law Enforcement Maitland faces a tough decision of her own.

Dredd takes a back seat for the majority of this opening part. It’s nice to see the effects of End of Days carry out and not be forgotten so quickly.

Rob Williams and Arthur Wyatt join forces for this one. Whether Rob Williams sticks around for the full course or just to serve as continuity with End of Days we’re yet to see. With both Arthur Wyatt and himself this one could turn into that promised Dredd epic when paired with End of Days. Boo Cook is on art duty for Carry the Nine and it’s great to see his work back in the Progs.

Rory McConville and Joel Carpenter bring us a tale of dead planets and alien treasure hunters.

When the Gregulz homework suddenly becomes void of life, treasure hunters from across the galaxy decend upon its ruins seaking fame or fortune. One such hunter is Henri from the planet Zon who’s on the hunt for “something the folks back home can be proud of“. Joining Henri is Arbitran Belacloor, a fellow hunter from a rival planet to Zon.

This one is a nice done-in-one story – as most of the Future Shocks are. Joel Capenter’s artwork is brilliant and Rory McConville writes a clever story one that has a few twists in its tale.

Hook-Jaw returns to the Prog, with another tale of Shark vs Everything.

With the Great White having now passed into popular culture, word of mouth of his tales and his own merchandise, Hook-Jaw really is a celebrity of the deep. When the descendants of the great Esme Sallas receive a late night visitor it seems that Hook-Jaw is back… for revenge!

It’s brilliant to see the tales of Hook-Jaw in the weekly Progs. Hopefully we see more of the brutal storytelling that featured in the original Action comics series than Hook-Jaw’s later much less human eating adventures. Alec Worley sets in motion a tale of revenge as family namesake takes on killer shark.

After last week’s shocking twist the whole Sinister Dexter world has been turned on its head. As the gang deal with its aftermath we’re left wondering whats next?

With Sinister Dexter ending this week, Dan Abnett leaves us with more questions than answers. Where do we go from here? And will the series be renamed to Hosana Dexter? or Dexter Hosana?

We re-join Skip Tracer after the events of the previous story. With Nimrod dealt with the Cube is now in orbit around Balbuena. We catch up with Nolan as he is on babysitting duty for the galaxy’s hottest commodity – music sensation India Summers.

Skip Tracer seems to always be an odd one with readers of the weekly Progs. Some welcome Nolan Blake’s return, others not so much. I personally will take each story on its own, and yes whilst the Nimrod saga was a bit bland in places, Hyperballard at least starts all guns blazing.

As always Dylan Teague shines as the colourist to Paul Marshall’s art as James Peaty’s script starts with a bang… hopefully it doesn’t end in a fizzle.

We open to Sherlock Holmes narrating the previous events in a letter, as he leads us through his transformation into the Stickleback character. Then a knock on the door brings us back into the present. Dr. Orlando Doyle is summoning something in the heart of London and it’s down to Holmes as Stickleback to stop them.

Sherlock Holmes is a tough one to bring a new side to. With a character who’s had such a rich background as Holmes, how do you add a new dynamic to the character?

By making him a master criminal Ian Edginton does just that. The master detective and the master thief being the same person is a clever tactic and throwing in the supernatural adds yet another twist in this tale.