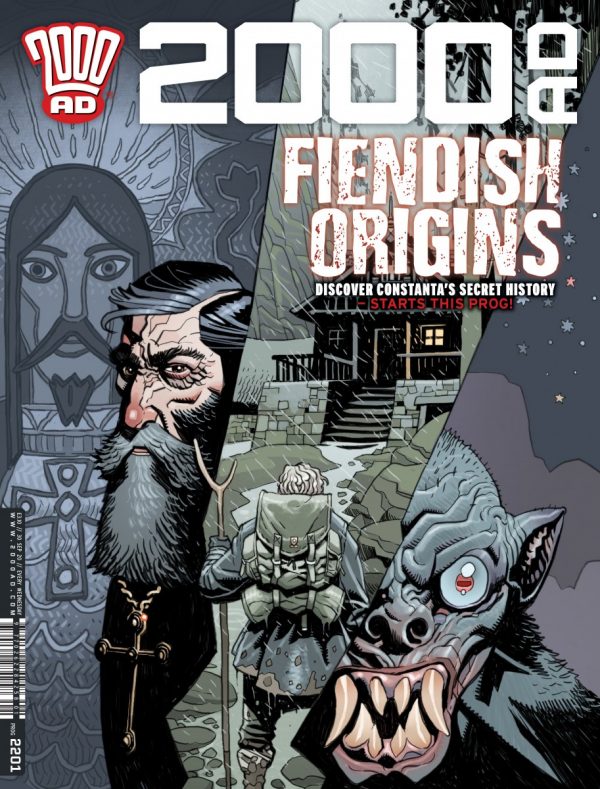 After the debut of four new strips last week in Prog 2200, the theme continues this week with the debut of yet another new story with Fiends of the Eastern Front.

Other than that it’s back to business as normal with the other debuts from last week. Maitland faces a tough decison in Carry the Nine, Sherlock Holmes takes on the Suspira de Profundis in Stickleback, Killer Robots attack in Skip Tracer, vampire hunting in Fiends of the Eastern Front, and finally closing out this week’s Prog is more guts and gore with Hookjaw.

After his brief possession by Death, Dredd finds himself back on duty. With Maitland’s discovery in last weeks opening part we’re left to wonder how long Dredd will be in a job, yet alone busting perps. With Maitland’s realisation that increasing funds in education could mean the end to the Judges, where do we go next?

As opening parts go last week’s was pretty good. Rob Williams and Arthur Wyatt are seemingly giving us a slow burner Dredd tale. So far this one has political thriller written all over it. One hopefully full of twists and turns as Maitland takes her turn in the spotlight.

Boo Cook’s artwork is amazing throughout Carry the Nine and it’s a pleasure to see it back in the Prog.  There is a superb scene where Cook has Dredd towering over Maitland. It’s a great piece as it not only symbolises Dredd’s superiority, but also his living representation of the Justice Department.

With the revelation that Stickleback is none other than Sherlock Holmes now behind us, we’re off to the library.

We rejoin Skip Tracer as Nolan continues his job as bodyguard to pop sensation India. It’s not long before the action kicks off with the service droid turning assassin. And with this we are off on yet another adventure throughout the Cube.

Skip Tracer always seems a little off to me. I don’t know why as both James Peaty and Paul Marshall are doing a grand job, but it just always feels a bit meh.

I did laugh as the service robot unleashed its killer side with a bit of servant cliché. No idea as well why India is drawn as a Manga character but no doubt this is somewhat part of the story.

As always Dylan Teague shines with his use of colour, which coupled with Paul Marshall’s art is a wonderful sight.

Fiends of the Eastern Front: Constanta- Part One

Some of us may not be familiar with Romanian Vampire Captain Constanta, so here is a brief run down before we get into this episode.

A German soldier’s diary found in World War II gave details about the terrifying vampire Captain Constanta and his Romanian platoon who leave a trail of death and blood in their wake throughout Europe. Ian Edginton’s previous work with Captain Constanta has shown that his history stretches back way into the early 20th century, with appearances on the Western Front in 1916.

We now find ourselves in 1921 and British pilot Tim Wilson has travelled to Romania in search of the infamous Captain. We’re reminded that Wilson has had a run in with Constanta before and it wasn’t pretty.

This opening part sets up the story well. We get some backstory through Tim Wilson who no doubt will meet a horrifying within the coming weeks.

Tiernen Trevallion paints a pretty bleak Romanian countryside with his use of muted colours and solid line work which also gives the characters an aged battle-scared look. With more coming in the following weeks we’re on to something special with this one!

Hookjaw’s return in the last Prog was a complete surprise and a welcome one at that.

The way both Alec Worley and Leigh Gallagher brought the legendary shark back was a brilliant idea. From legend of the sea to folk tale told in the local pub, it was great to see Hookjaw quite literally bite back against its now diminished reputation.

This week it’s the fallout to last week’s shocking conclusion. With the pub landlord being Hookjaw’s latest victim we now follow a strange mysterious cult on the beach to another mysterious death.

It’s all horror and no shark with Hookjaw. Whilst the whole strip is inspired by the original Jaws movie, its brilliant to see that you don’t need to reveal your killer from the offset to make an instant reaction.