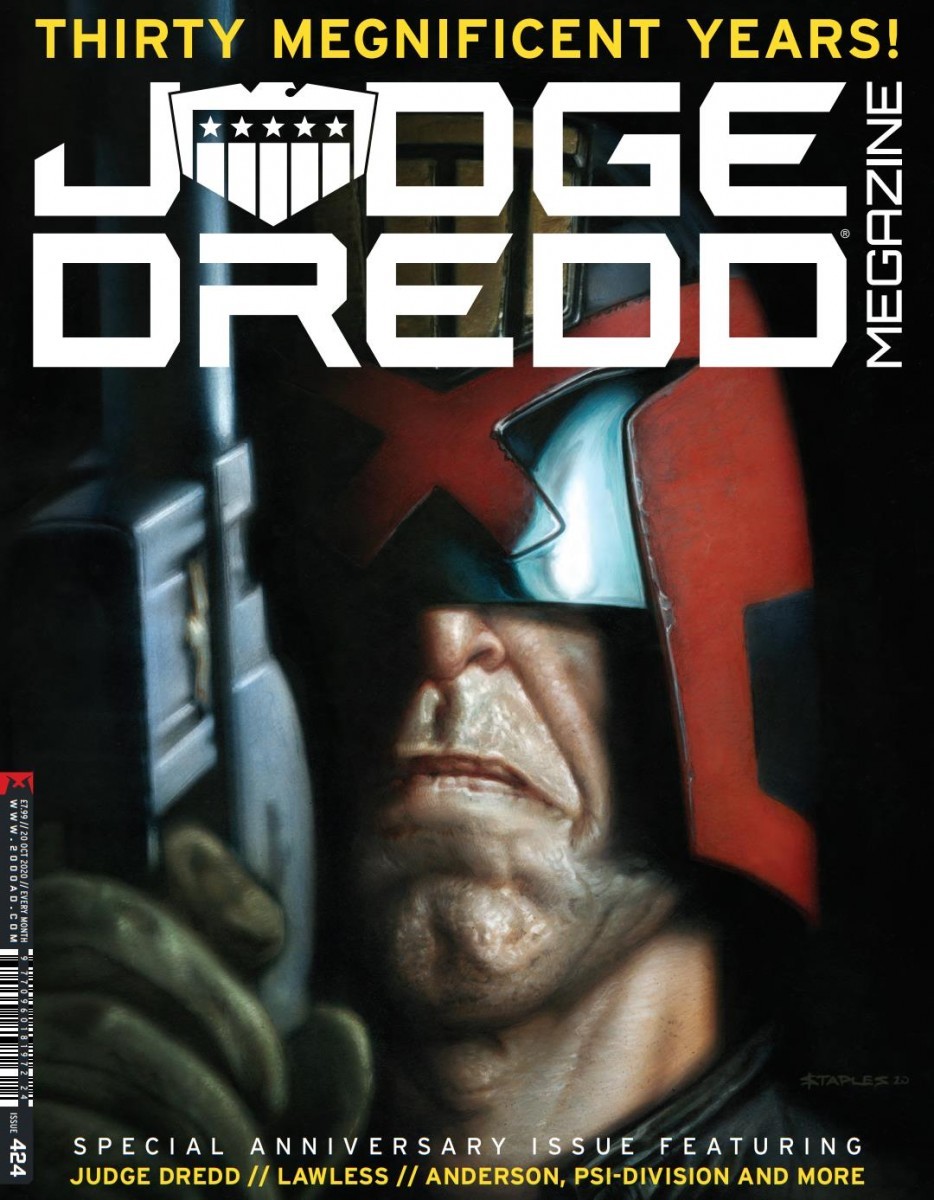 This month the Judge Dredd Megazine celebrates its 30th Anniversary with a bumper 100 page issue. Also launching with Megazine # 424 is the start of the 2000 AD encyclopedia which will be coming bundled with the Megazine for the next few months.

To celebrate this landmark 30th Anniversary we are given an (nearly) all-new line up of thrills. The legacy of America Jara returns to Mega-City-1 in Judge Dredd: The Victims of Bennett Beeny, we take a trip into an alternate Mega-City One in Megatropolis, we go back to the early days of the Judges in Drednoughts, Anderson enters the Asylum in a one-off Anderson tale, the Returners head to Brit-Cit in an all new Returners, The Dark Judges return in Deliverance, and rounding off this month’s Megazine is a musical number to celebrate the 50th episode of Lawless.

John Wagner and Colin MacNeil team up to bring the legacy of America Jara back to the forefront.

Dredd joins Judge Beeny as she investigates a disturbance at the aptly named Bennett Beeny Block. Total War terrorists have taken over the block and are murdering any of the residents that have any connection to the Judges or the Justice Department – big or small.

It’s great to see John Wagner back penning a Dredd tale. We don’t get to see his work much anymore so every time we do it’s felt like a moment to be treasured. With Colin MacNeil unable to continue art duties we get joined by Dan Cornwell a few pages in. There is a slight shift in artistic tone but Cornwell is a damn fine artist and his Dredds are always well received.

Part one ends with a chilling account of the current real world situation as the blocks Citi-Def rile themselves up and head into the fight with no prep, no experience and full of bravado – much like the current chilling issues that we’re seeing over in the United States with their militia groups taking up arms.

Megatropolis is an alternative version of Mega-City One. An art deco retro-future variation where the Justice Department isn’t as advanced as its MC-1 counterpart but is entirely corrupt. The only good cop still standing is Joe Rico who’s now about to get a new partner – Amy Jara.

The alternative universe take to Mega-City One is brilliant. We get a great insight into what to expect on the first page, with mentions of Mayor Booth and District Attorney McGruder, and who’s the news reader? None other than Barbara Hershey!

Storyline wise it centres on Rico and Jara who seem to be about to take on the world of corrupt cops and gangsters. It’s a great opening chapter which gives way to a very clever slow reveal of who the main culprit could be – but given the protagonists of this alt-universe tale, who else could it be?

Dave Taylor nails the look of this proto Mega-City One brilliantly with its art-deco environment and its very distinct retro-futuristic vibe. The whole look reminds me of a detective noir, which could work wonders within the Dredd-Verse and Megatropolis is the starting point to that wonder. 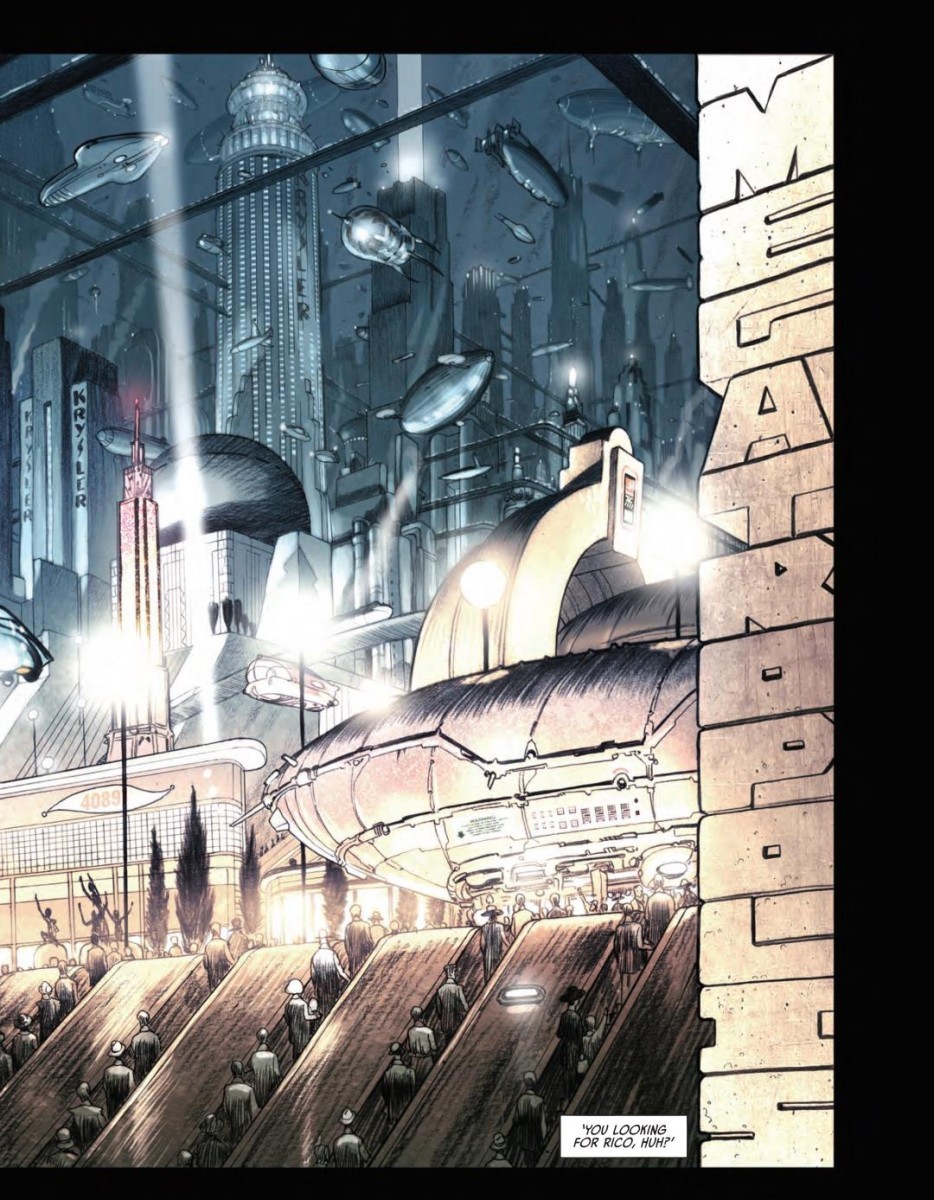 Fresh out of the Academy, Judge Glover heads out to Boulder to supplement a four-man team of Judges. When she arrives the city has decended into a city wide riot. Unaware that they are under orders to holster their weapons due to the growing resentment of the Judge Experiment, Judge Golver heads in all guns blazing.

Drednoughts has epic written all over it and with Michael Carroll at the helm its off to a great start. With Carroll currently chronicling the Departments early days within his Judges series of novels there is no one more equipped to bring the tales of the early pre Mega-City-1 Judges to the Meg. John Higgins take on art duties and his opening full page shot of Judge Venn screams how good Drednoughts will be. 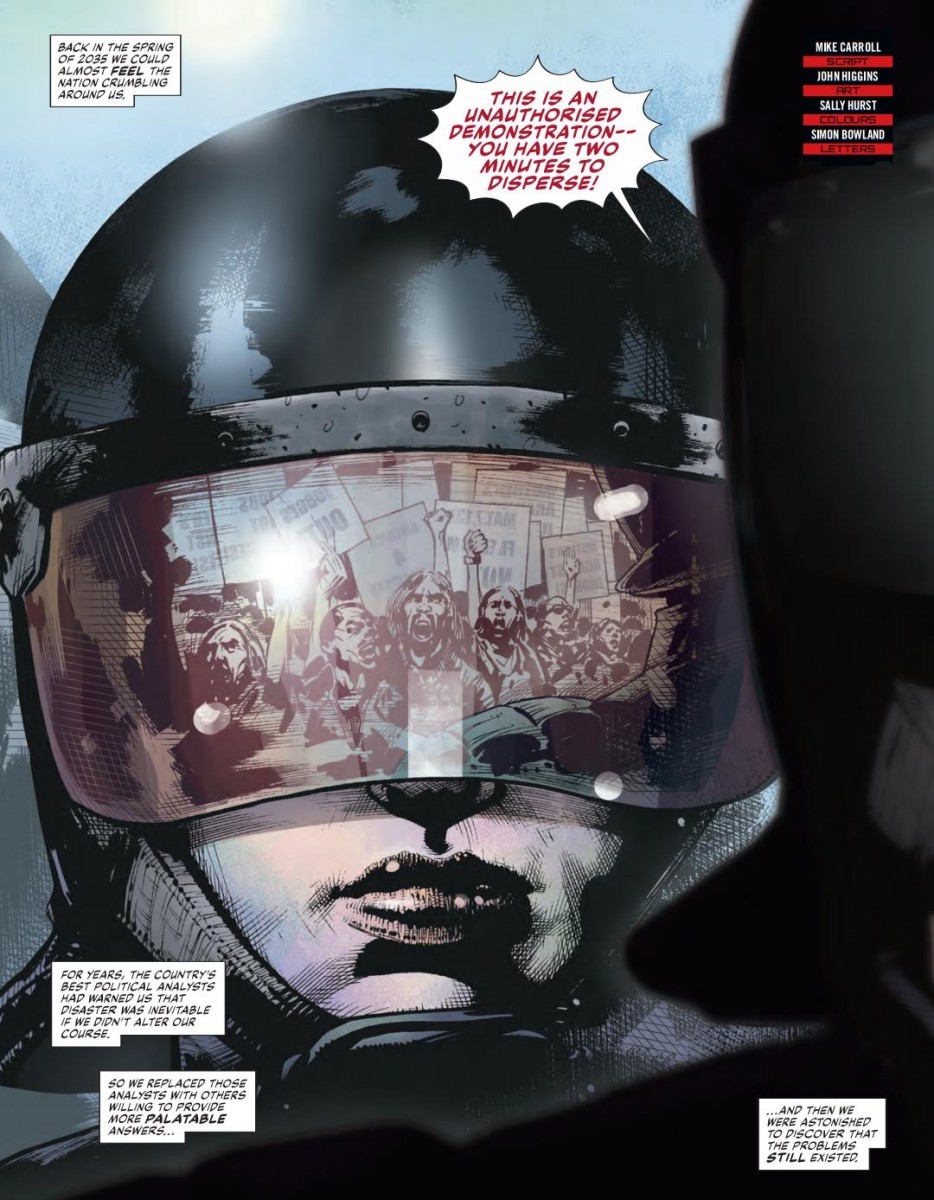 We join Anderson as she patrols the Strollerball, where a potential bomber is planning to disrupt the joys of battling for glory and prizes. This is quickly revealed as just background as we are then quickly taken to the actual story which takes place in the Institute for Troubled Psychics – or as Anderson calls it ‘Dunthinkin’.

The Institute is where the retired and broken PSI Judges get sent and for all intensive purposes is a PSI Asylum. Judge Toledo, Psi-Div’s senior medic is at the institute to see pre-cog Psi-Judge Agatha Nephus and that’s when things start to go bad… really bad.

What we get is a nicely done Anderson tale that’s all wrapped up in a single episode. We get a great sense of female power with Anderson and fellow PSI Judge Shakta as they investigate the Institute.

We’re back with the Returners as they find themselves in Brit-Cit looking for a cure for the curse that’s made them immortal – but not invulnerable!

This ones full of that old British stick with jokes about the weather and a bar named ‘Ye Law @ Ordere’ which just so happens to be a prison.

Nicolo Assirell’s art dominates things here as they did with the Returners in their last outing, except that this time the vibrant sun-drenched feel has been replaced with rain. After all it wouldn’t be future Britain without that British weather.

The Dark Judges were found floating in space by a cargo ship and then went on to destroy the planet Dominion. Mega-City One sent the marines to the planet and due to a traitor on board they get reunited and acquainted with Judge Fear. By the end of the last series, Dominion was destroyed and Judge Death was trapped in a Boing Tube to suffer endless amounts of poetry.

We rejoin the marines and Dominion’s survivors as they make their way back to Earth. Coming in the opposite direction is the Navis Mortis, the flagship of the Mortarian Death Cult. With Judge Death floating in between the two, its obvious to where this ones going.

Knowing that is what makes this Dark Judges tales excellent – it’s not the destination but the journey taken. David Hine sets things in motion for a really dark tale, yet one full of adventure and laughs as the Dark Judges set their sights yet again on the Universe.

Colonial Marshal Metta Lawson has finally delivered Badrock into safety and relative stability. But in getting here, she’s made quite a lot of enemies. With the SJS now overseeing her actions, there’s an Mayoral election on the horizon. So what better to celebrate than a 20 page musical number to celebrate all things Badrock.

It’s a wonderful way for Dan Abnett to give us both a finale and a summing up of everything that’s gone on throughout Lawless’ run. The entire cast get to sing out their respective stories and we get a a light glimpse into Badrock’s future.

Phil Winslade also shines throughout the musical number with his phenomenal art. As usual with each page packed full of characters and detail its a thing of pure beauty. 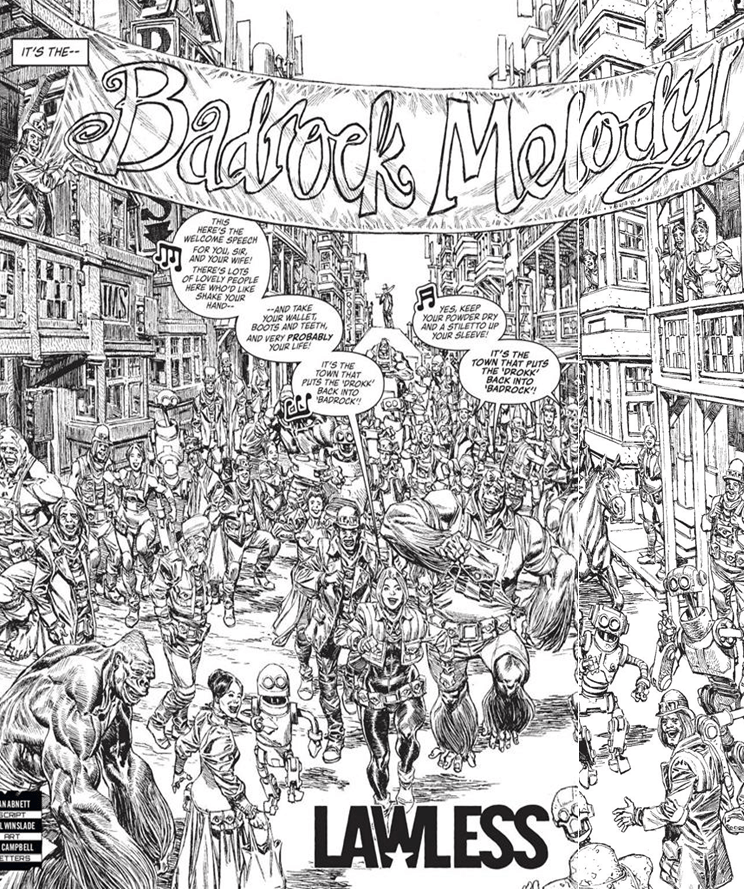