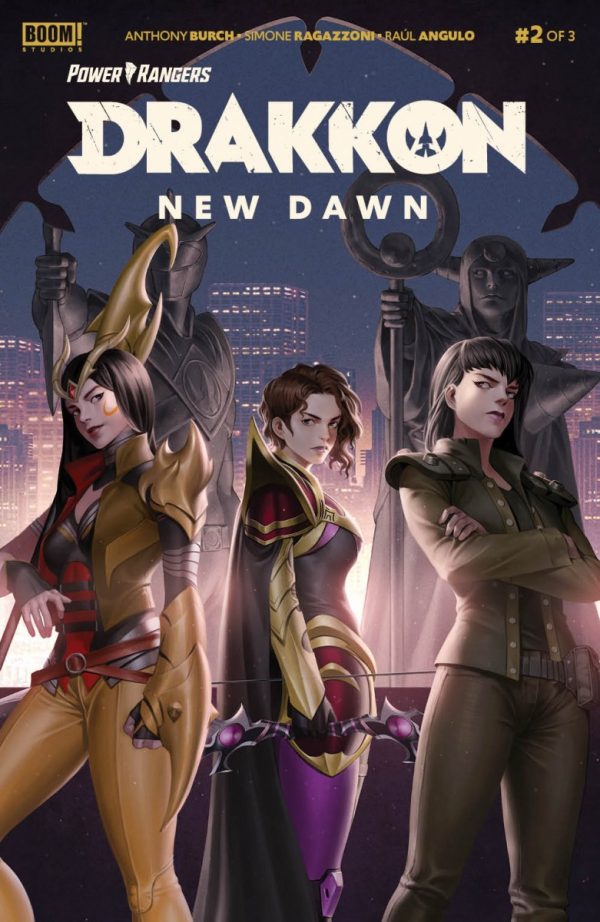 Lord Drakkon is dead and his Ranger Slayer Kimberly Hart has taken his mantle for her own. With ideas vastly different to Drakkon, Kimberly aims to unite the fractured Rangers and finally bring a sense of peace to their version of Earth.

In the opening issue to this three part series we learnt that Kimberly has the near impossible task of uniting the various clans under her leadership. With the Sentries and the Coinless still at odds Kim plans to raid the Deadlock – a impregnable fortress where Drakkon imprisoned his most wanted adversaries. During the raid on the Deadlock Kim discovers a mysterious armoured Ranger inprisoned with in the fortress’ depths.

After the last issue’s cliffhanger ending we catch up with the “gang” as Finster-5 works on removing the armour from the mysterious Ranger. Underneath the armour we soon learn is Jason – the original Red Power Ranger. Its clear that Jason’s been through hell and as the original Power Rangers begin to catch up, Adam bursts in with news about Eclipta’s arrival.

Scorpina then gives us some backstory into this Universes version of Eclipta and how Lord Drakkon managed to sway her to his side. The trick with this is that Eclipta isn’t the big bad so to speak. Much like the Heralds of Galactus, Eclipta works for the Dark Spector who she will summon to enslave Earth once she’s defeated the remaining Rangers and their groups.

Adam devises a plan to use the Diffuser  to increase their numbers by using Kimberly’s Power Coin. Jason however is dead against this idea as he knows what using the Diffuser meant to Drakkon. Its here that we learn about Jason and how he managed to be captured in the Deadlock. Jason was placed within the armoured suit as a way to stop his multiple escape attempts. After escaping his cell numerous times Drakkon eventually broke him by ordering Kimberly to kill herself if Jason ever escaped.

With Jason refusing to agree to Adam’s plan the newly reunited Rangers are separated once again as Jason leaves the fight. Kimberly decides to go ahead with the plan and together with the Coinless and the Sentries the Rangers head off to face Eclipta. 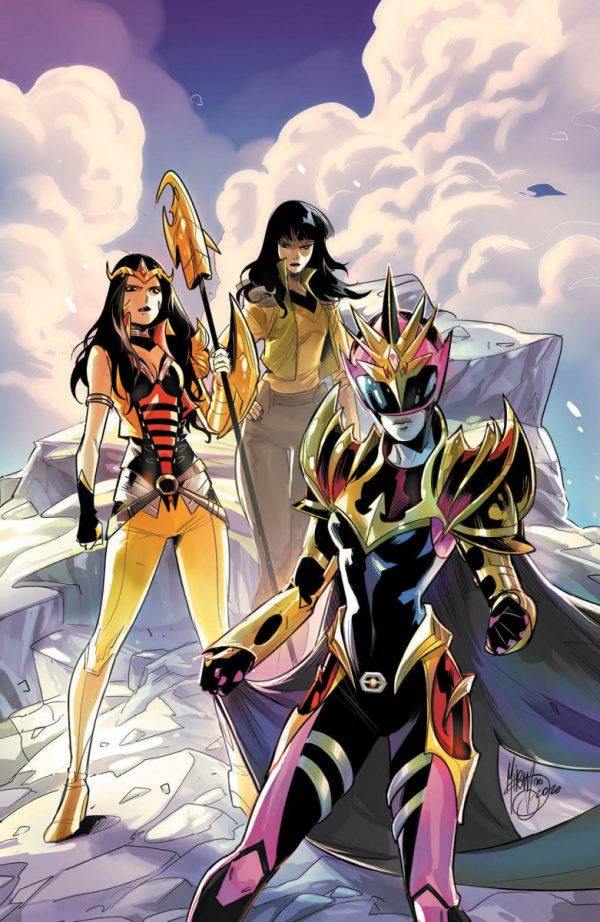 Its an interesting approach to use Jason as the mysterious armoured Ranger and it’s one that actually makes a lot of sense. With this universe’s original Ranger team now back together you can see why Jason is so set against continuing Drakkon’s plans with the Diffuser and the Sentries. His motivation also plays into Kimberly’s thoughts in the opening issue in that their wold needs hope.

Adam’s death in this issue comes as a surprise. Granted in New Dawn he’s very much a side character but it’s worth noting that his death is a great bit of character development for Scorpina. It’s interesting to see if the death of Adam spurns her on in abandoning Earth or if it strengthens her reasoning to save it.

Eclipta doesn’t do a lot in this issue which is surprising as the majority of it is her testing the Rangers’ defences. With talk of the Dark Spector forever looming I’m expecting it to end up being Rita Repulsa from Scorpina’s reality – or for that matter Lord Drakkon himself.

With the mini-series ending next month can all the questions be answered in that final issue?