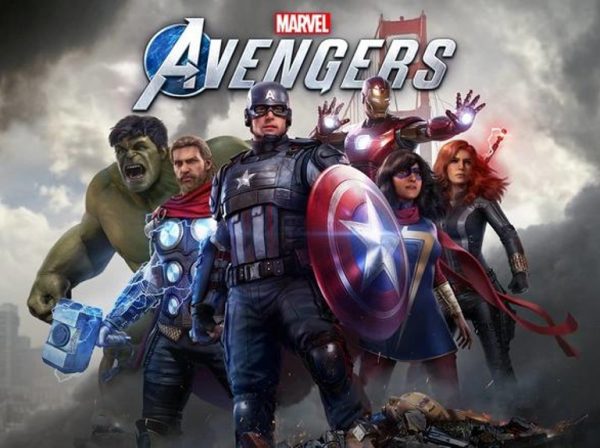 I remember watching the Marvel’s Avengers reveal trailer during E3 2019 with a sense of glee. An Avengers game published by the powerhouse that is Square-Enix and developed by Crystal Dynamics; it’s a team-up that would make any comic book fan squeal with excitement – me being one of them! Marvel’s Avengers is an action RPG that allows us to take up the mantle of the original Avengers team. It features an expansive cinematic campaign that puts us into the shoes of the Avengers and a multiplayer mode that allows four players to fight side by side against various global threats. A robust character upgrade system also allows us to fully control how our chosen hero fights in a truly customisable way.

The campaign kicks off in San Francisco during A-Day. A-Day is an event that had been put together to specifically celebrate the Avengers and highlight all of their accomplishments in serving humanity. A-Day is also used by S.H.I.E.L.D. to show off their new Helicarrier called the Chimera which will be the Avengers new base of operations. Also S.H.I.E.L.D. use the event to show the world Terrigen which is a newly discovered energy source that S.H.I.E.L.D. has engineered to power the Chimera. Naturally not everything goes to plan and the event is soon attacked by an unknown source. Our eyes and ears through this opening is Avengers super-fan Kamala Kahn. We take control of Kamala as she wanders around the event and takes part in some of the attractions on offer. Wandering around gives us a few nice surprises and is one of the best openings that I’ve played through. Its a light-hearted introduction to the game and provides great contrast to what happens next in the 10-15 hours of the story. 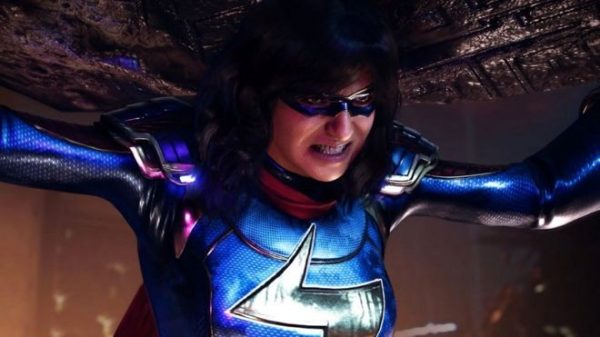 Overall I was extremely happy with how the story played out. With the MCU Avengers still riding on the success of the cinematic universe, its very easy to jump on that band wagon with a copy and paste storyline featuring Thanos and the Infinity Stones. Thankfully Square Enix and Crystal Dynamics avoid this and go down a much darker route. After A-Day the Avengers disband and in their wake we get the rise of AIM. Advanced Ideas Mechanics uses the horrors of A-Day to seize S.H.I.E.L.D. assets and control over Stark Industries and in doing so becomes a company working for humanity’s benefit – on the surface at least. Meanwhile away from the public eye AIM is secretly experimenting with Terrigen to create their own variation dubbed D.A.R.K. Terrigen, which it plans to use on the fledgling Inhuman population. The players role as a now Inhuman Kamala Kahn is to regroup the fractured Avengers and put an end to AIM’s plot.

With Marvel’s Avengers being intended as a live service game the Avengers Reassembled campaign acts as a 10-15 hour tutorial. As the final couple of hours of this campaign roll around you can clearly start to see how the game’s future will pan out. I feel that with the main campaign Crystal Dynamics have given a reassurance that they fully intend on delivering an experience worthy of its name sake. The only issue they have is that the game could suffer the same fate as other live service games and that’s in keeping players engaged. With potential plot threads being dangled during the main campaign its clear that Crystal Dynamics has at least its future storyline mapped out, and considering how big the Marvel Universe actually is there are many roads that the Avengers could go down. 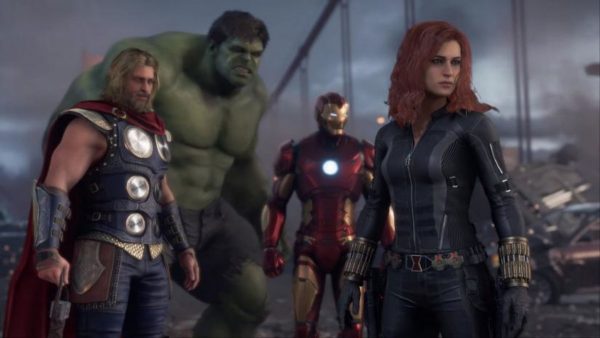 This then leads me to my only real concern about the game. Once the Avengers Reassembled campaign has been finished, we then unlock the Avengers Initiative campaign which is not only the game’s endgame – it’s ultimately where Avengers’ future lies. Our first journey into the endgame unlocks a few new quest lines and some new activities such as Vault Missions. On top of this we then have faction rep to raise which can either be from S.H.I.E.L.D. or Hank Pym’s Resistance. Your not penalised in any way for which faction you work for and each essentially offer the same options. Each character also has a character pass to work through which offers various cosmetic items to unlock. On top of this we also have daily and weekly objectives to work towards as well as a community goal. For the hard-core Avengers or Marvel fan doing these on top of grinding out character gear will keep you going for a few months at least. However for the casual fan who’s possibly not bothered about equipment or unlocking cosmetics, once the unlocked missions have been completed then that’s it – there is nothing else for them to do. Factions could also use a re-work as there is really no weight or reason in working with them. Each rank increase rewards you with some gear and material, however this same gear can be earned during missions. As far as I can tell nether S.H.I.E.L.D. or the Resistance offer anything exclusive either which makes it seem a little pointless.

Combat plays like any other brawler and we have various fast and heavy combos at our disposal. Each of the six heroes approaches combat in a different way. For example Captain America is our agile all rounded hero and can go toe-to-toe with pretty much any enemy. He has various fast hitting combos and can utilise his shield for long range foes. Black Widow is also an agile fighter however what she lacks in strength get made up by her speed. We get to utilise swift attacks from her dual pistols or batons to deliver quick and deadly strikes. The Hulk on the other hand is an juggernaut built for close quarters. Hulk is able to grab hold of foes and throw them around the battlefield. Depending on how you level Hulk he can either become a defensive powerhouse or an attacking nightmare. Thor and Iron Man play similar to each other and both utilise various airborne attacks with either Stark’s range of missiles and blasters to Thor’s lightning and Mjolnir. Thor feels the more ‘tanky’ out of the two in that his attacks are slightly slower than Iron Man’s and he does more damage. However Iron Man has a more varied skill set and can switch between lasers, missiles and repulsors at will. Ms Marvel is the surprise entry and can fill a variety of roles. She’s quite adept at close combat and can use her polymorph abilities to capture foes at long range. Her ultimate ability can also be quite devastating when used on a group of enemies. Each character has their basic set of combos as well as special abilities that are tied to a cool down meter. Each character also gets their own ultimate ability which is can range from using Hulkbuster armour or calling the Bifrost. 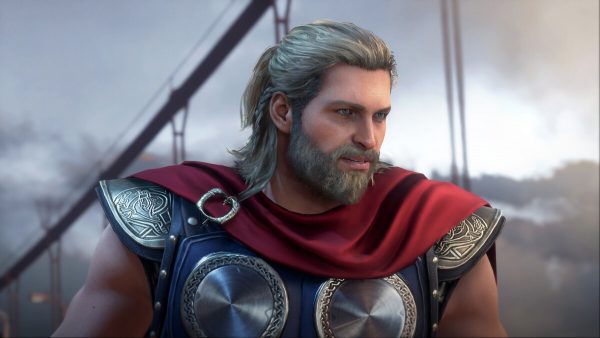 Each character has three different skill trees: Standard, Specialist and Mastery, and this is how we decided how we want to build or hero. Matching the correct gear to your current branch can result in a few devastating builds that can really tear through AIM’s forces. Naturally there is a grind when it comes to equipment but every mission completion can result in a wealth of loot. Loot drops are tied to our current hero so whilst this means we can concentrate solely on that hero, we do have to switch between all six when it comes to levelling up and character building.

Overall Marvel’s Avengers is a decent title. Crystal Dynamics have done well with the source material and they have crafted a believable Avengers story that moves away from Thanos, The Infinity Stones and HYDRA. In using AIM as their chosen bad, Crystal Dynamics introduces a lesser known evil and in doing so opens up a lot of potential future story lines. Combat is almost flawlessly executed and each character is fun to play and experiment with. Character progression is surprisingly in-depth and encourages different variations of play. Each level is fairly open and each offers a variety of side objectives to complete, whilst these objectives are very repetitive they can result in rewarding a wealth of gear for our chosen hero. There are plenty of variations to the locales we visit and each features some stunning scenery. Whilst there is the odd graphical glitch and frame rate issue I would expect these to be ironed out within the next few weeks. I’m expecting Avengers to be a talking point for a while at least and whilst the game could have a bright future, without more variation of objectives and new locations to visit we could also see its untimely demise. 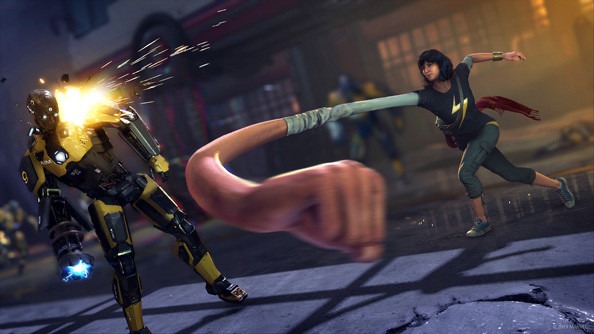