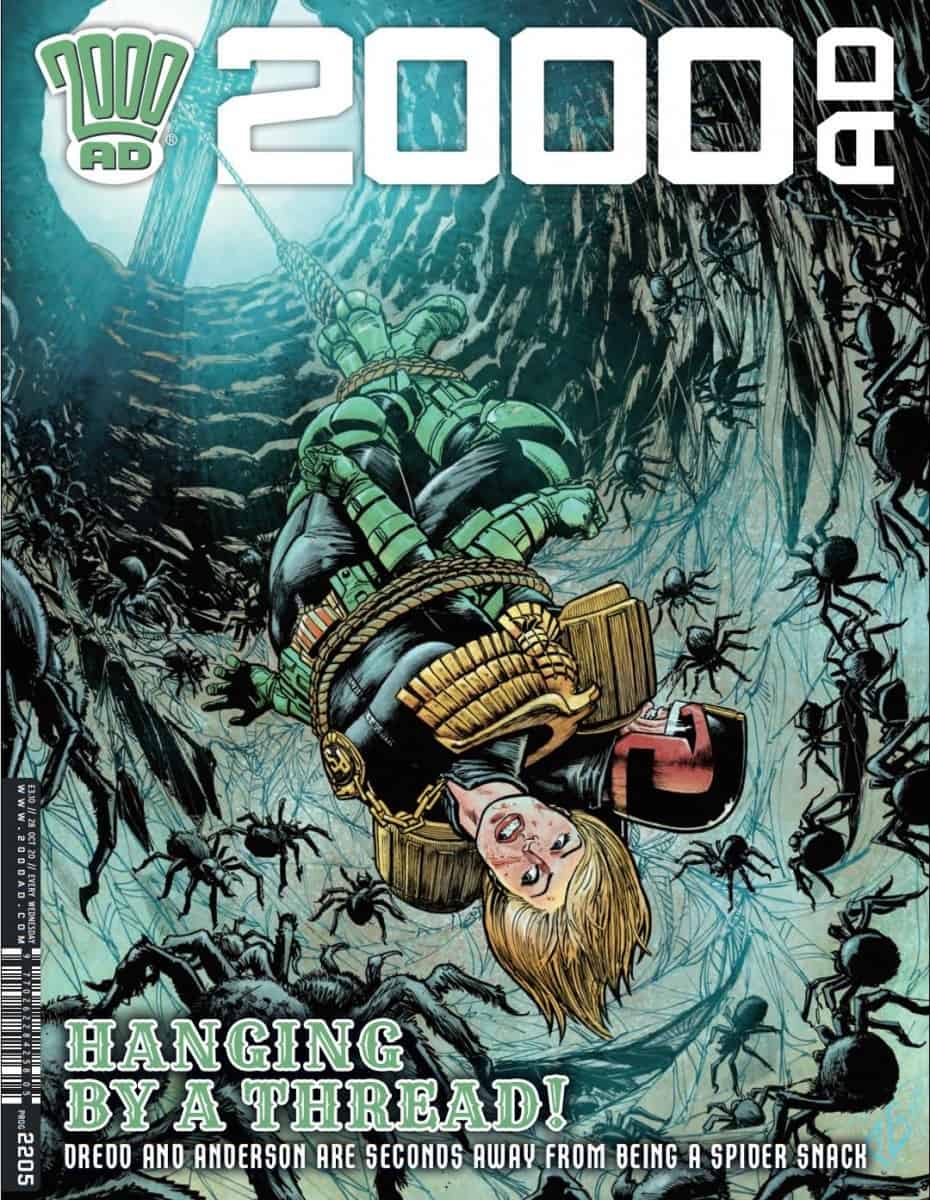 We’re back with another weekly installment of 2000 AD. Next week’s issue sees the return of the special all-ages Regened Progs with Prog 2206, and due to this the current strips will be taking a one week break. However it’s all systems continue this time around as Dredd and Anderson hang out in They Shoot Talking Horses, Don’t They?, yet more supernatural suspense in Stickleback, India and Nolan step through the portal in Skip Tracer, a tale of swords in Fiends of the Eastern Front and finally wrapping up another issue is everyone’s favorite shark tale Hook Jaw.

This one has been a nice tale that ties up a few more loose ends from Rob William’s End of Days epic. With the Horse and a couple of other refugees from End of Days now finding themselves at home in the Meg, does this mean that the Apocalypse is finally over?

Dan Cornwell art has been superb throughout They Shoot Talking Horses, Don’t They? and I hope his work graces us again in the near future. 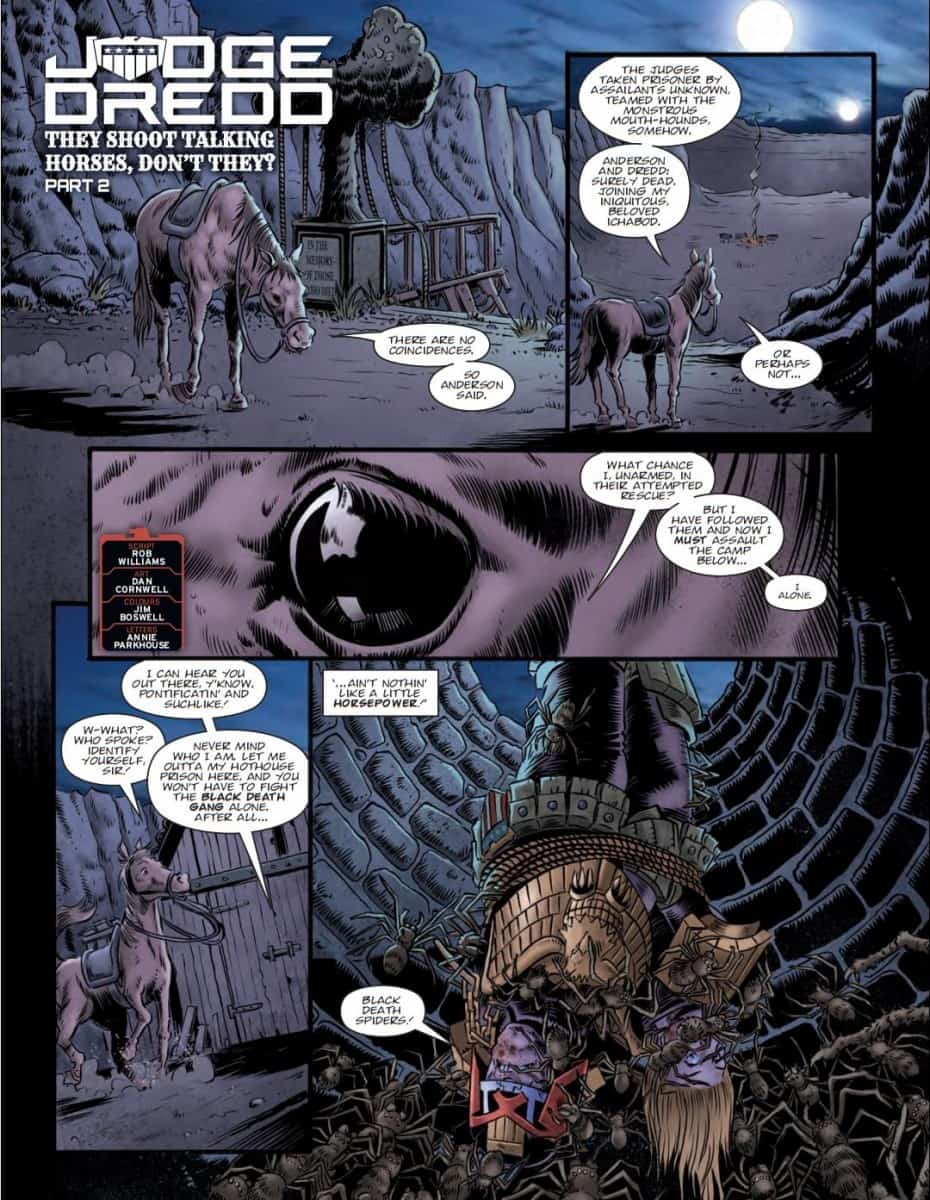 Another person from Stickleback’s past comes back to haunt him this week. This time it’s Detective Valentine Bey asking for answers from the detective-turned-crime lord. But with the three Sisters still working away in the background, what’s next for our hero turned villain?

D’Israeli continues to produce some fantastic art to accompany Ian Edginton’s story. His cleaver use of black and white really jumps out of the page and superbly pulls the reader into the supernatural world. 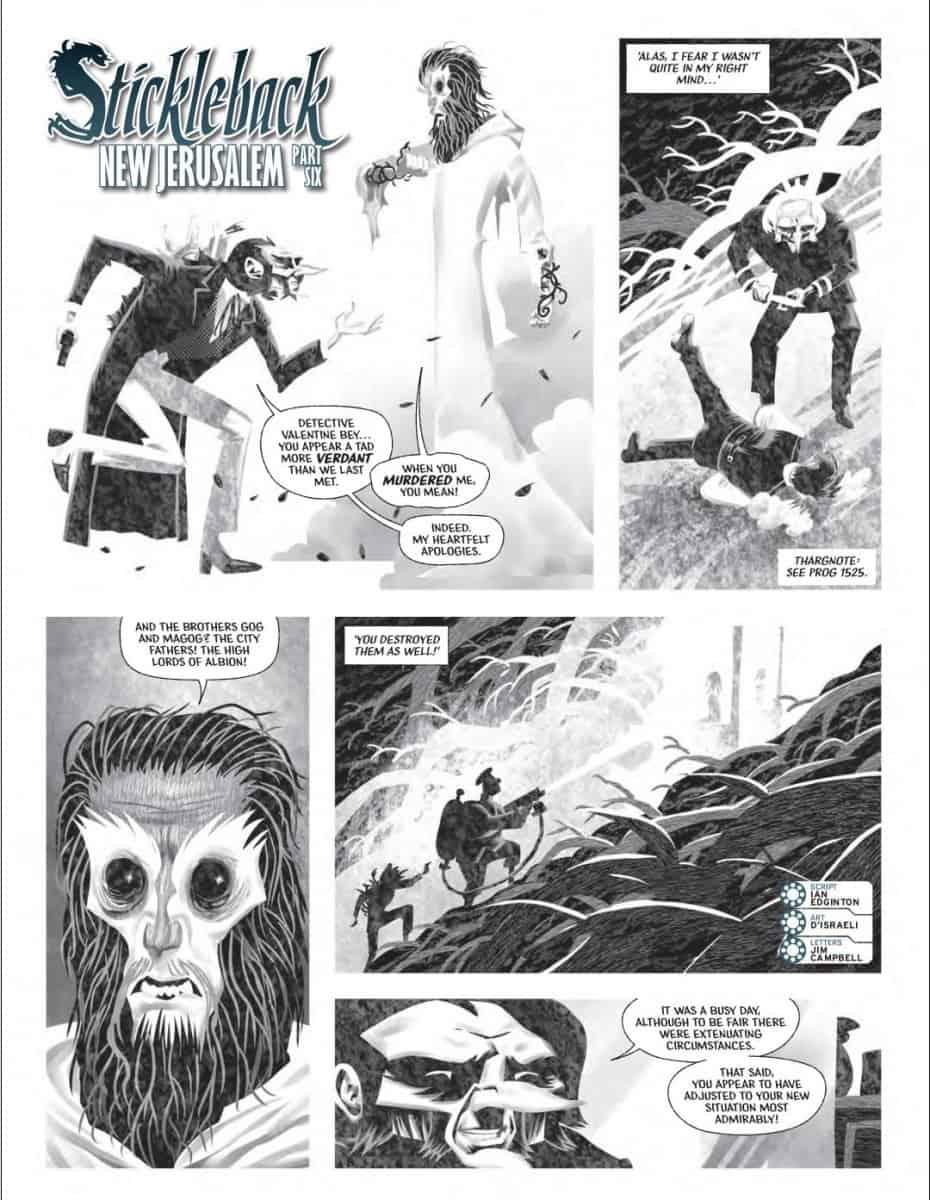 Nolan Blake is really regretting taking the job to protect anime-faced Pop Princess India Sumner. With both being on the run, they’ve recently found themselves in the toxic Underneath of The Cube.

This week starts with the duo jumping back through the Spacial Gateway and land right into the hands of the Splicers that have been sent presumably by India’s manager Van Hess.

Nolan thankfully gets some answers this week as he grills India on what she knows. It’s yet another episode of traveling from A-to-B-to-C this week as Hyperballard “skips” a long. That’s not to say its a boring read as thankfully James Peaty’s story has a lot of intrigue still hidden away. Ian Marshall and Dylan Teague continue their team-up which brings a visual feast to the readers eyes. 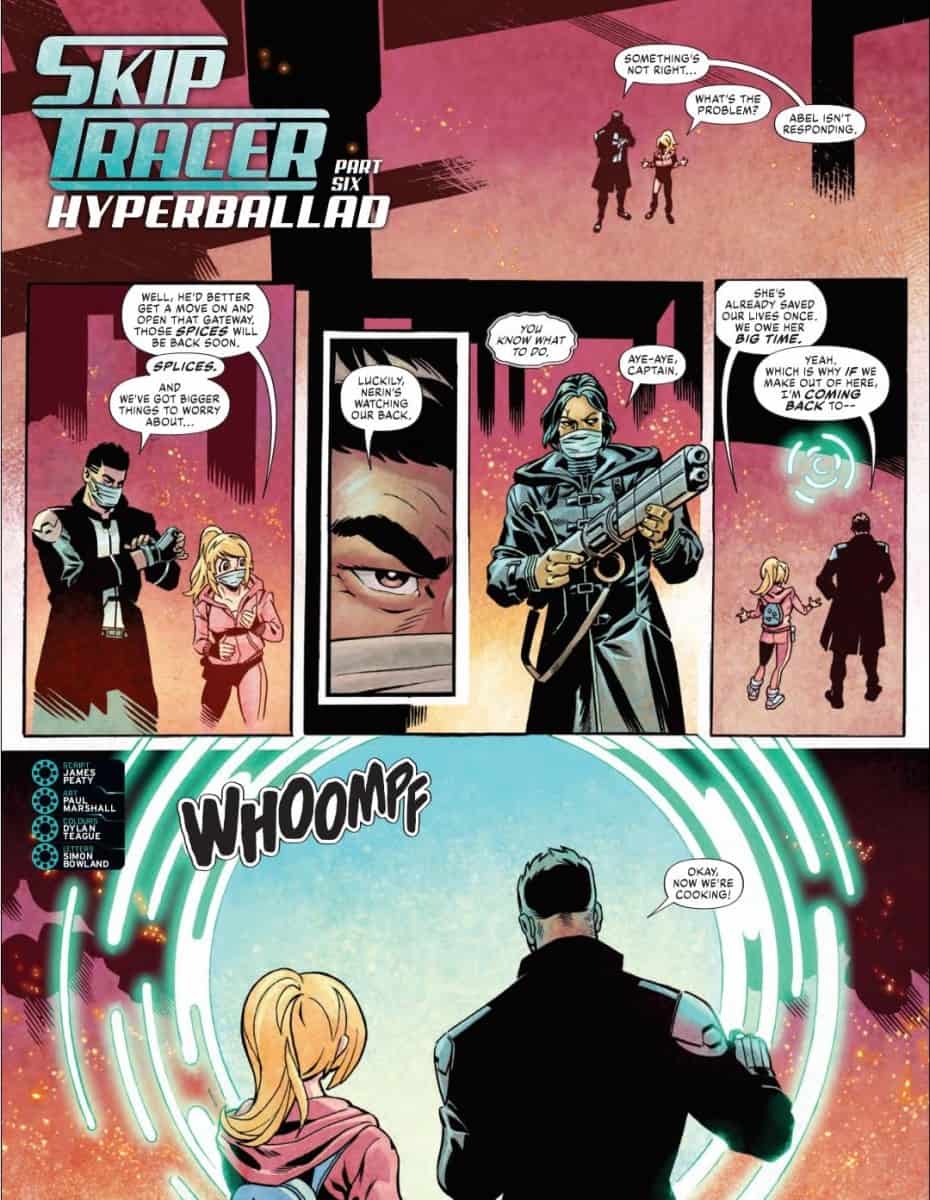 The history of the Constanta blowing continues this week. We’re almost up to date with this one but one things still not been resolved – Constanta isn’t a blood-sucking Vampire.

There’s a tonne of folklore coming through within Fiends of the Eastern Front, which makes the ‘how, what and why?’ of the inevitable vampire turn that ever more questionable.

Trevallion continues the brilliant artwork seen throughout the Fiends run. The fight between Constanta and the Farmers is a really brilliant piece that captures the scene perfectly. 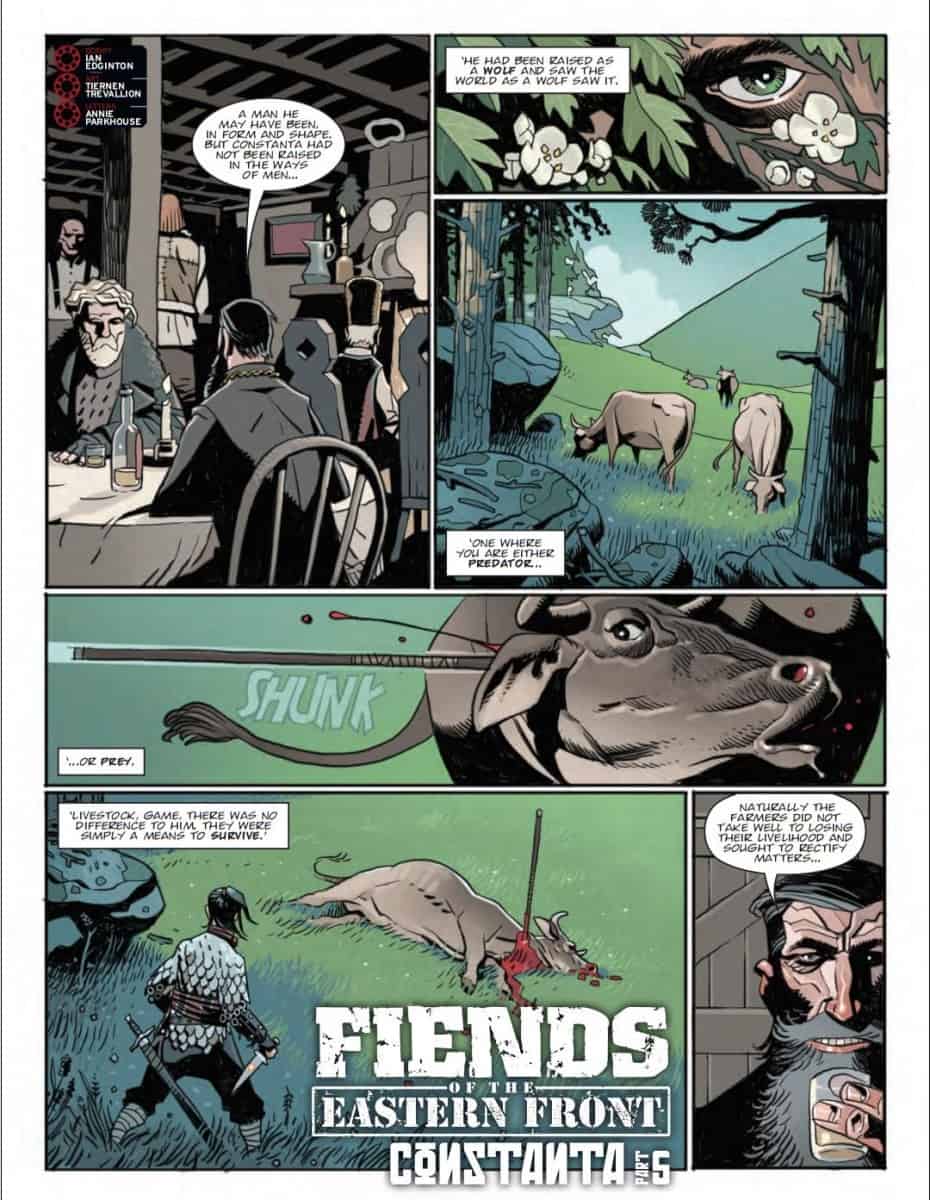 Hook Jaw, or more importantly something impersonating Hook Jaw has been terrorising the Cornish coastline for a few weeks now. With footage of the shark doing the rounds its attracted every Tom, Dick and Harry to the small town.

Meanwhile Jack catches up with the real enemy who started the whole bloody reappearance of everyone’s favorite shark. With Hook Jaw finally revealed this ones really not about shark at all!

Hook Jaw has defied all of my expectations. What started off as a simple “shark terrorises small community” has turned into a full blown supernatural horror. The monster’s reveal is both shocking and unnerving as it no way hints as to where Alec Worley will take us to next! 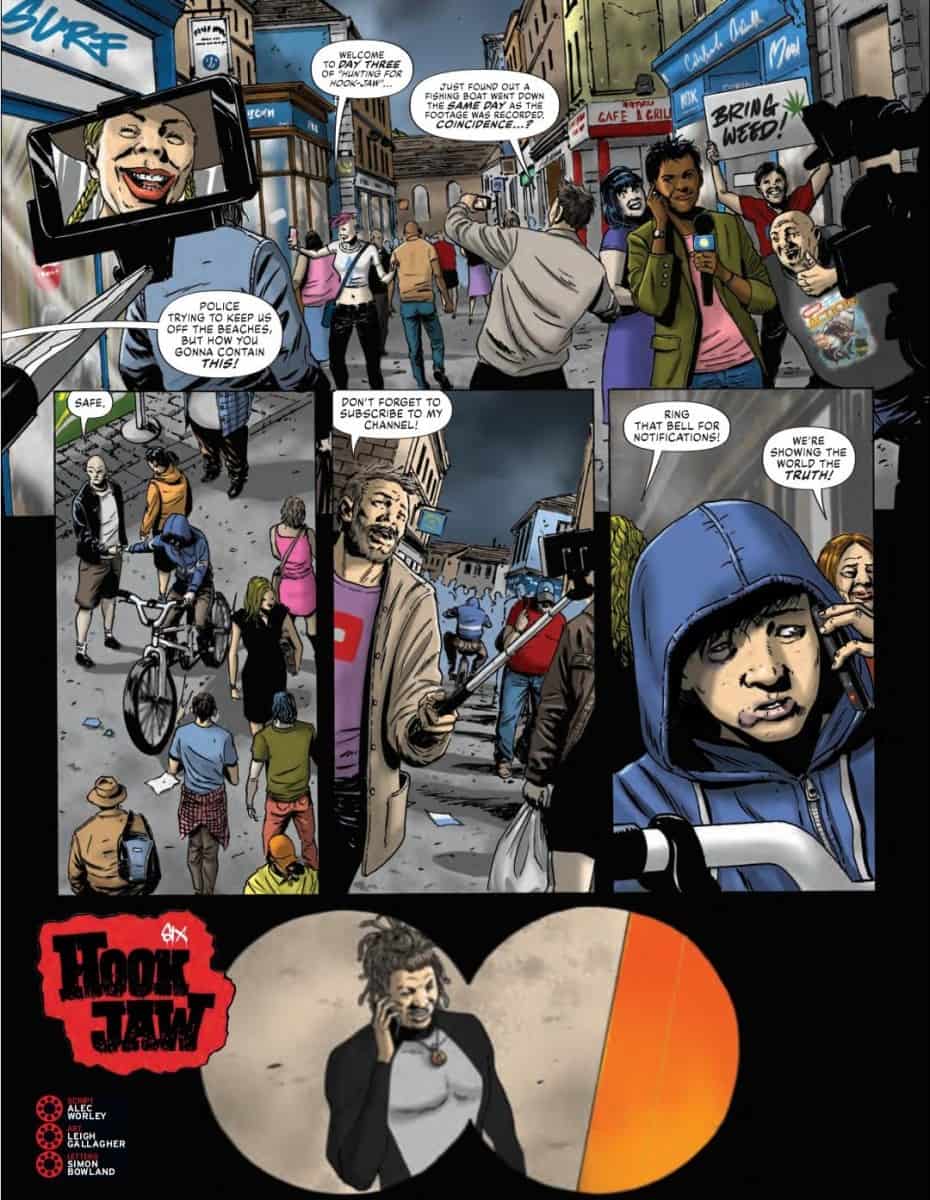