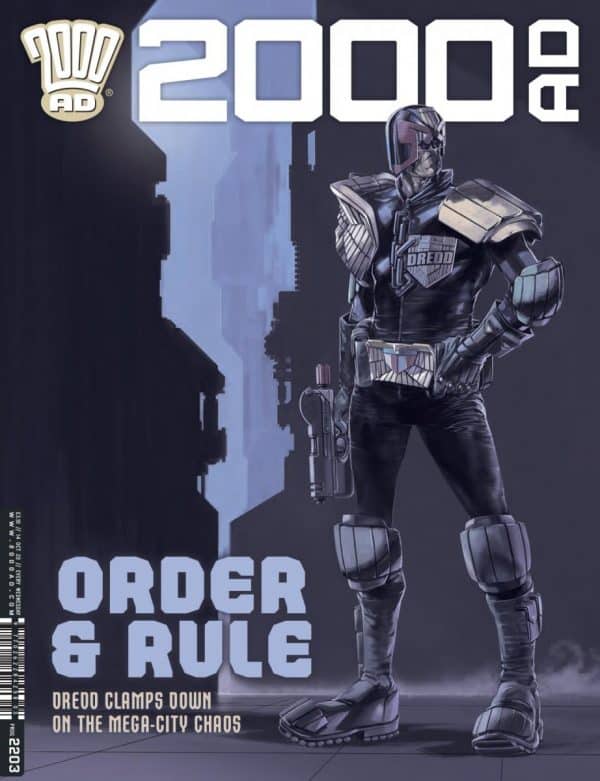 It’s Wednesday yet again and Tharg has graced us with another excellent installment of the weekly 2000 AD Progs.

We’re up to Prog 2203 now and this week sees;Maitland vs the Justice System in the finale of Carry the Nine, Sherlock makes a sacrifice in Stickleback, Blake and India are stuck under the Cube in Skip Tracer, Tim learns of Constanta’s history in Fiends of the Eastern Front, and rounding this week of is more spooky Shark goings on in Hook Jaw.

After Accounts Judge Maitland’s idea of a crime free Mega-City One was rejected by the Council of Five she toys with emailing her model to a journalist. This naturally brings Maitland to the attention of the SJS.

Maitland decides to trust her initial instincts and sets off to seek the council of none other than Dredd.

Four parts isn’t enough for this political tale. There is so much more to Maitland’s solution left to unpack, from Dredd agreeing with Maitland and promising to speak to the Council again, to the Chief Judge showing a bit of leniency, and let’s not forget the SJS silently forever there in the shadows. The ramifications of Carry the Nine and even echoes of End of Days can possibly be with us for a while as of yet.

Boo Cook’s art has been fantastic throughout this run and I’m highly anticipating his next outing. With Carry the Nine Rob Williams and Arthur Wyatt show that a less action oriented Dredd tale can be just as effective as a guns blazing epic such as End of Days. 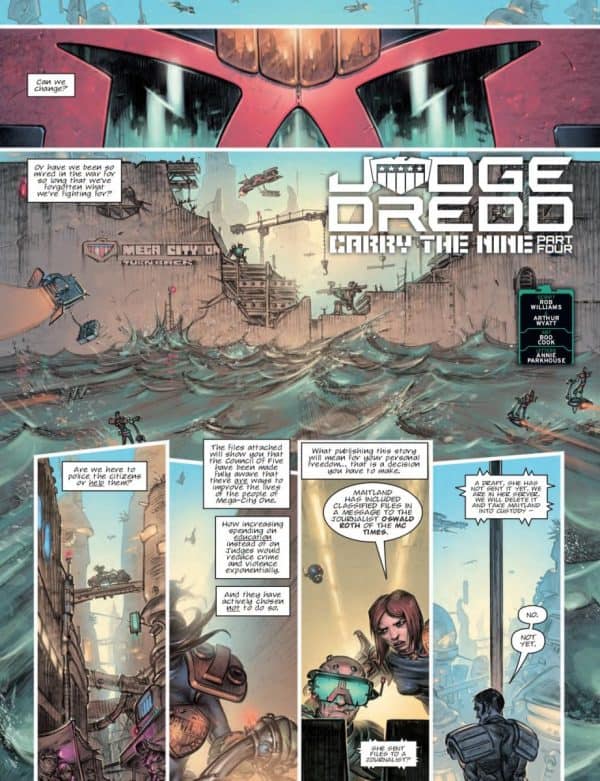 We’re still in the psychedelic dream world in Part 4 of New Jerusalem with Sherlock and the Green Knight still at odds. Whilst the Knight accepts Sherlocks ultimate sacrifice, its Sherlock or should I say Stickleback who comes out on top.

I’m completely new to the world of Stickleback as I’ve not read any of Sherlock’s previous outings. However I must say that Stickleback is fast becoming my new favourite series in the Prog. D’Israeli’s art is amazing as always and is full of incredible detail and textures that really brings Ian Edginton’s story to life. I’ve got no idea where Stickleback is going but I’m enjoying the ride so far. 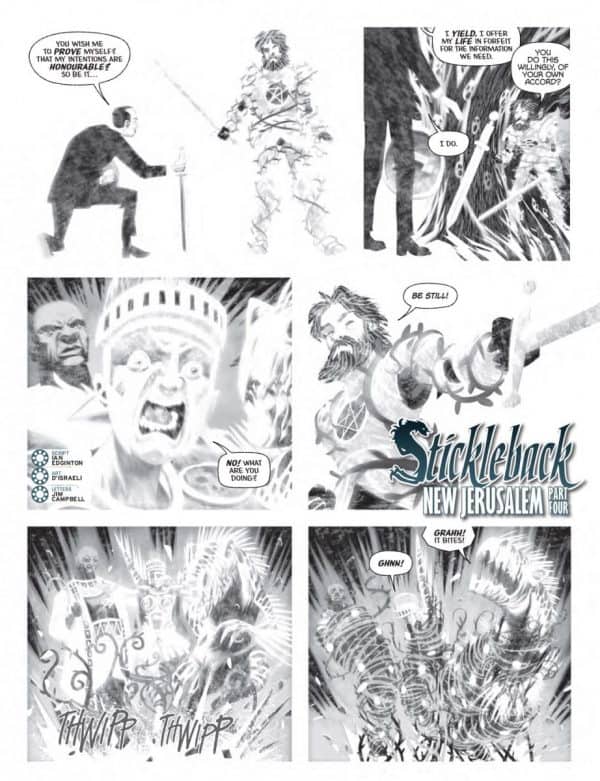 Nolan Blake continues his ‘babysitting’ of pampered pop Princess India “Manga Style” Sumner. Due to the “faulty” spatial gateway the duo find themselves in the Underneath of The Cube and come face to face with the Splicers.

It’s still not explained why India has a Manga style face but hopefully we get some explanation in the coming issues. Dylan Teague is again the highlight of Skip Tracer and even if you’re not a fan of the story, Teague’s art is worth it alone.

We delve into Constanta’s past as the Romanian Priest tells Tim his story. With that we’re taken back to a time where magic and monsters were a more common sight, with Lady Alina trapped in the snow with her baby son and a pack of giant wolves.

If you (like me) where expecting a tale of someone hunting for the Fiends to then find them, this is the issue where that table is turned. Instead we have two strangers sitting in a Tavern, talking about Constanta’s origins. Tiernen Trevallion’s art is so good that you can really feel the warm environment of the Tavern and the cold snow capped landscape that Lady Alina finds her self in. It’s quite a gorgeous thing to look at and makes for yet another fantastic tale. 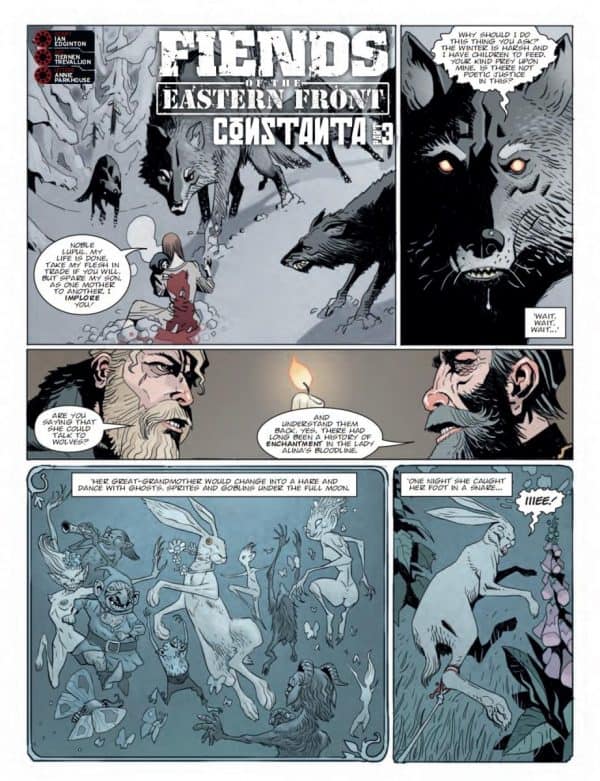 The body counts rising as Hook Jaw is well and truly back. Jack on the other hand is down on his luck. With no one believing his story of the shark attacking the boat, he’s left on his own.

Alec Worley continues the mystery that started with a shark but could now end entirely different. What we do know is that whilst there’s a certain mysticism beneath the waves there’s more going on on the surface that is still in the shadows. 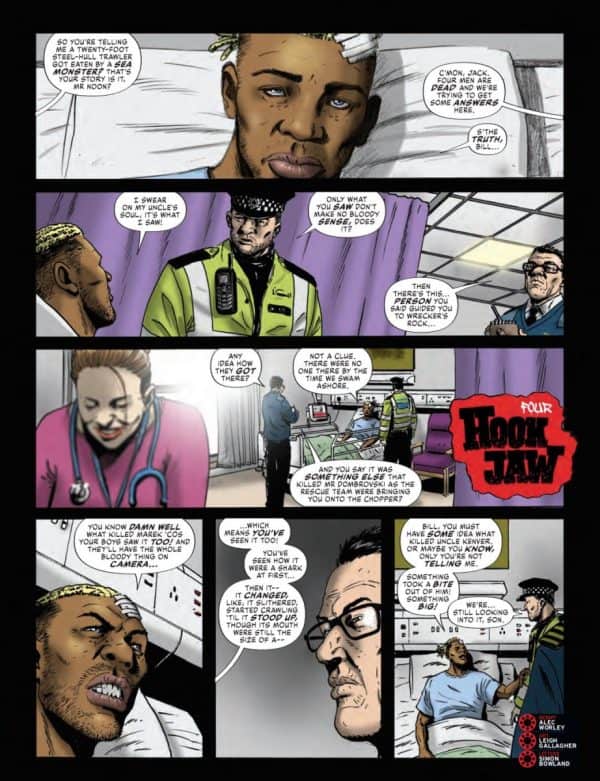