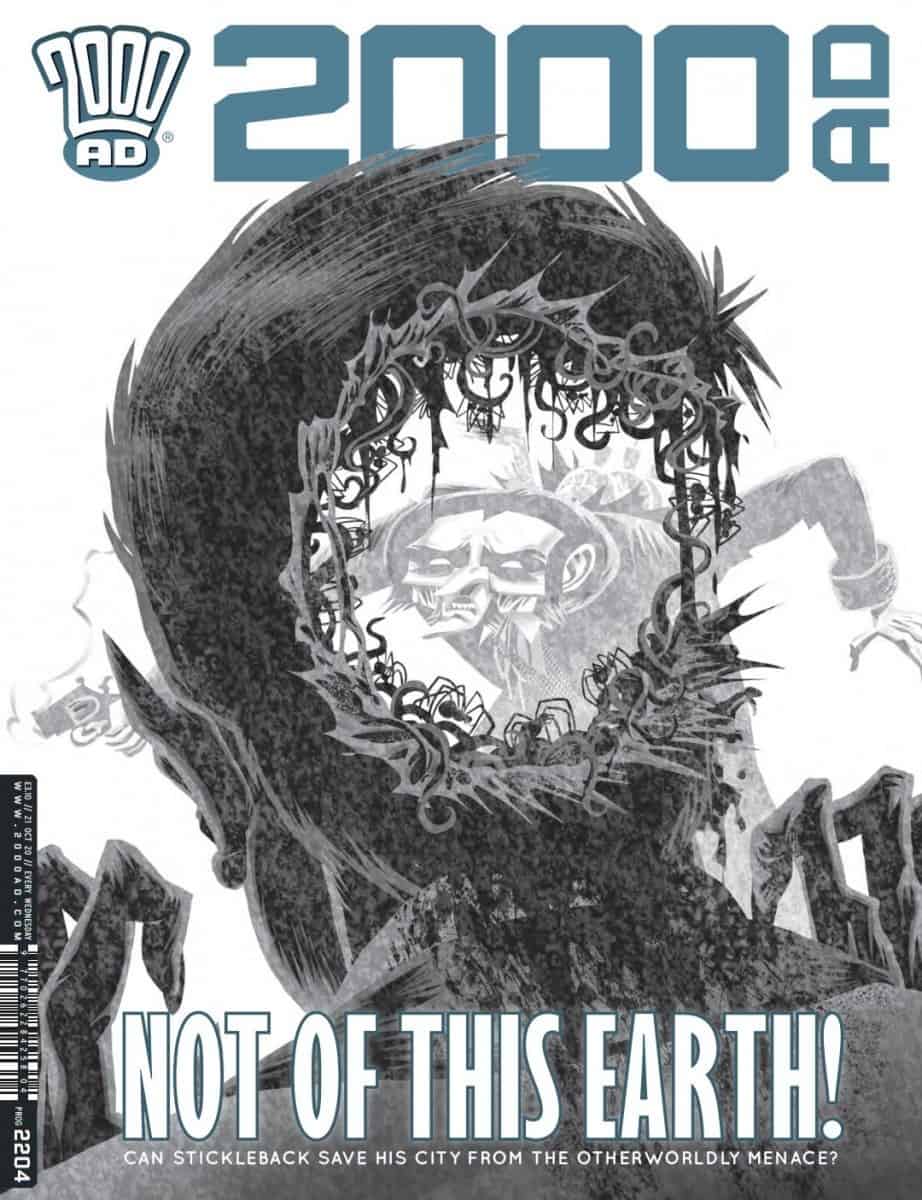 Tharg The Mighty is back with another instalment of the 2000 AD weekly Prog and inside it’s the start of a new Judge Dredd tale as Rob Williams continues to wrap up the plot threads from End of Days in They Shoot Talking Horses Don’t They?, more mystery unfolds in Stickleback, India’s anime face is explained in Skip Tracer, a boy becomes a man in Fiends of The Eastern Front, and finally more shark horror in Hook Jaw.

Still dealing with the aftermath of End of Days, Rob Williams turns his attention to both Ichabod’s Horse and those weird mothballs with teeth that chased them both across the Cursed Earth way back in Prog 2184.

Its all tongue-in-cheek – as a tale with a talking horse should be – from Anderson’s opening line to the horse quoting Shakespeare. Whilst Anderson, Dredd and the Horse don’t find the Mouth-Hounds (so not mothballs then?) something more sinister finds the trio instead.

This is a great opening part that does well to tie up End of Days’ loose ends. Dan Cornwell joins Williams on this one and his art is always a welcomed sight. If in doubt, just look at that Lawmaster! 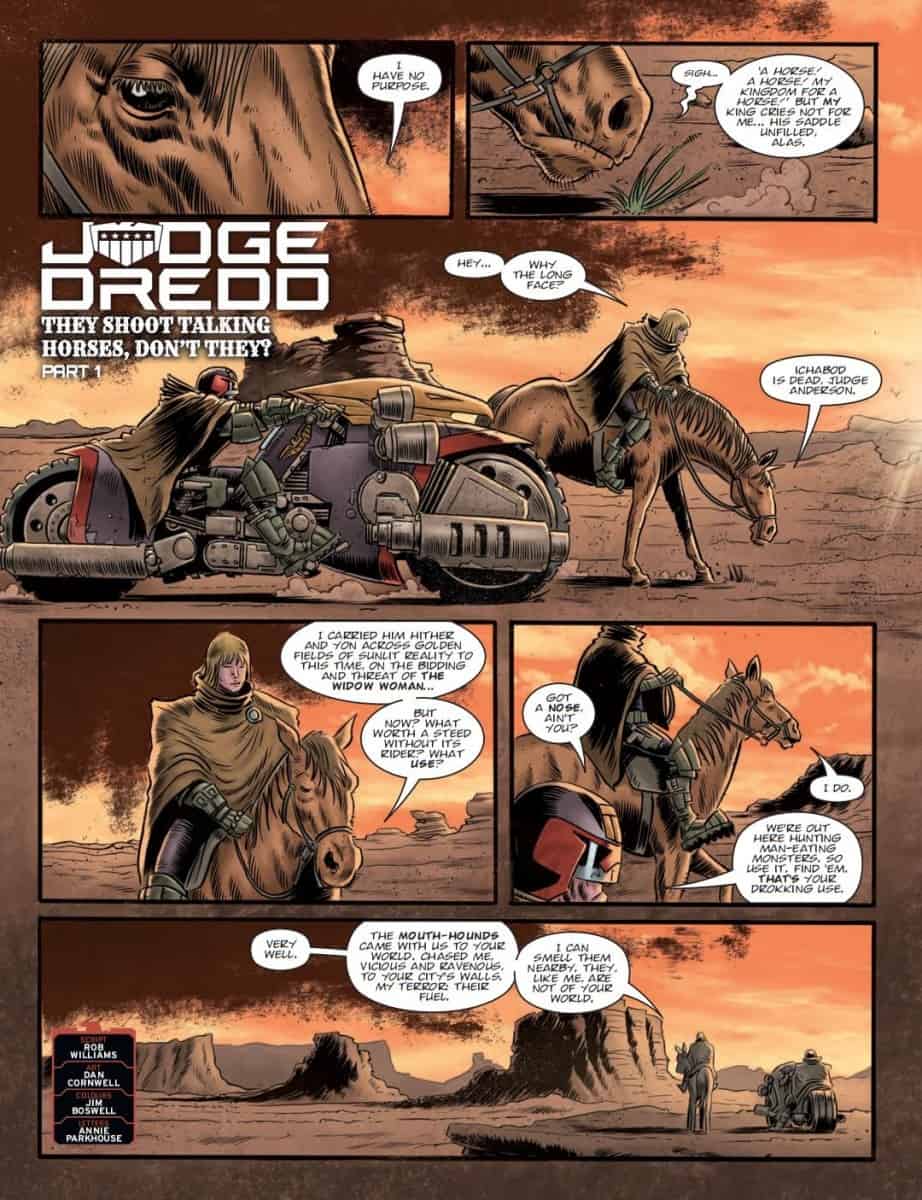 Supernatural bad guys always have a way of coming back from the dead, and Stickleback learns this the hard way this week.

With the gang still hot on the heels of the Three Sorrows, it’s a shot to the head that turns things upside down; with the result ending with a transformation of sorts it’s difficult to say what comes next.

Whilst the Stickleback/Sherlock thing is still yet to resolve itself Ian Edginton keeps us guessing as to what’s next. With the tale taking an even more supernatural route, I’m going to imagine that this is one question that’s not going to be answered any time soon. 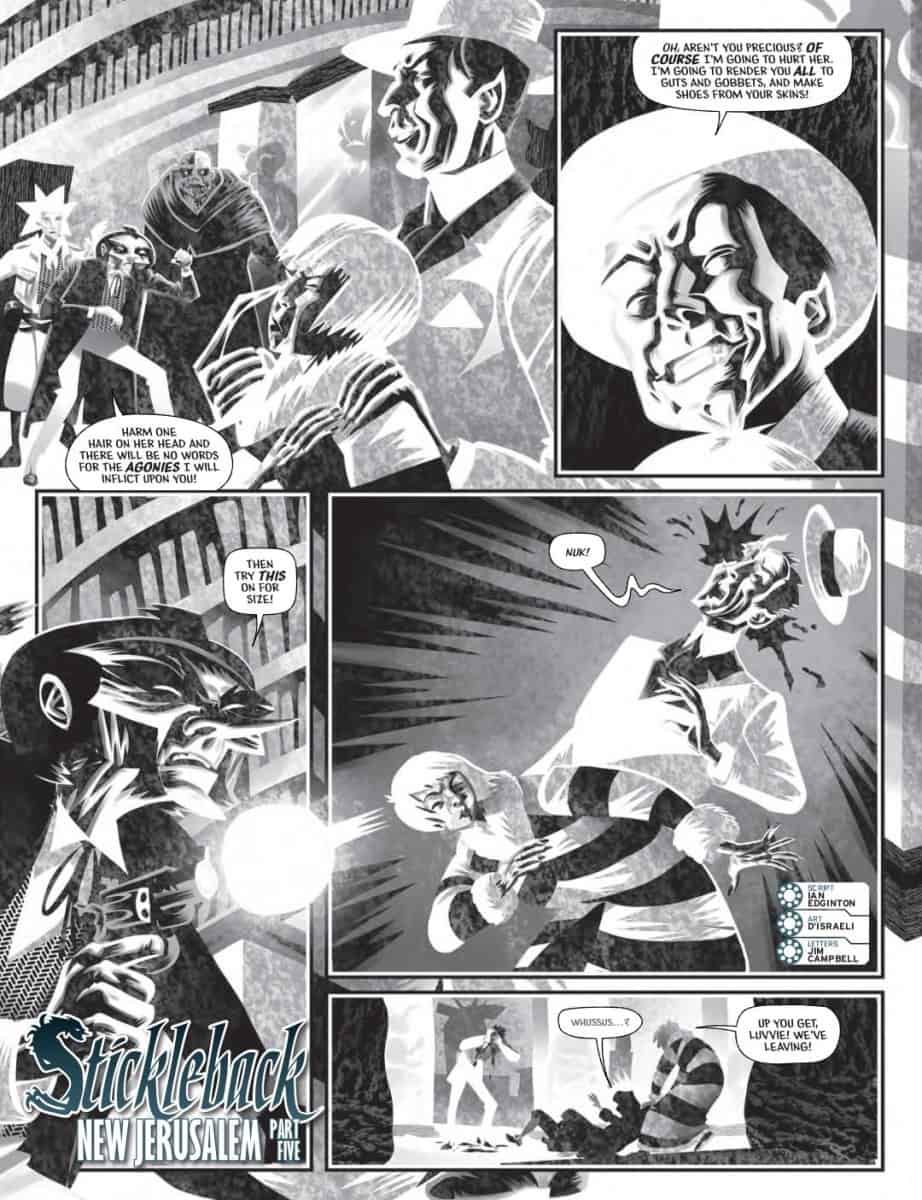 We finally get the answer to why India Sumner has an Manga-style face and its all down to her shady manager, Van Hess.

With that question answered, we’re back in the Underneath of the Cube as India and Nolan attempt to survive while Abel works on getting the pair back to the relative safety of the upper levels. It’s not long before more trouble comes knocking.

I’m enjoying Hyperballard, which is something I didn’t think I’d ever say about Skip Tracer. While not the most engaging of stories, it just flows from A to B. As ever Paul Marshall and Dylan Teague work in tandem to deliver some gorgeous art to James Peaty’s Pop Princess plot.

We get more of Constanta’s backstory this week as a boy becomes a man. How we go from Man to Fiend is one for the future but surely its something that’s rapidly approaching?

With a tale that’s gone deep into the past with Dragons, Wolves and Blood, Ian Edginton’s second weekly tale is one full of folklore. Trevallion’s art is still as fantastic as always and really taps into the gothic setting of Constanta’s past.

“Your gonna to need a bigger bus” is what greets us this week. As tales of Hook Jaw continue to circulate, there’s costumed characters and a mini bus tour going on. Poor Jack on the other hand is on the verge of loosing his sanity and is wrapped up in something he doesn’t quite understand.

That brings us to Hook Jaw. Is it a shark or something else entirely? Well we do get at least some sort of answer this week as Alec Worley brings yet another twist in the ‘fin’ of Hook Jaw.

Leigh Gallagher delivers another great issue with the art on show. And who would of thought that a shark could fit in a jacuzzi!

With the shark being used to set up something bigger, Hook Jaw still has plenty of life left in this tale. 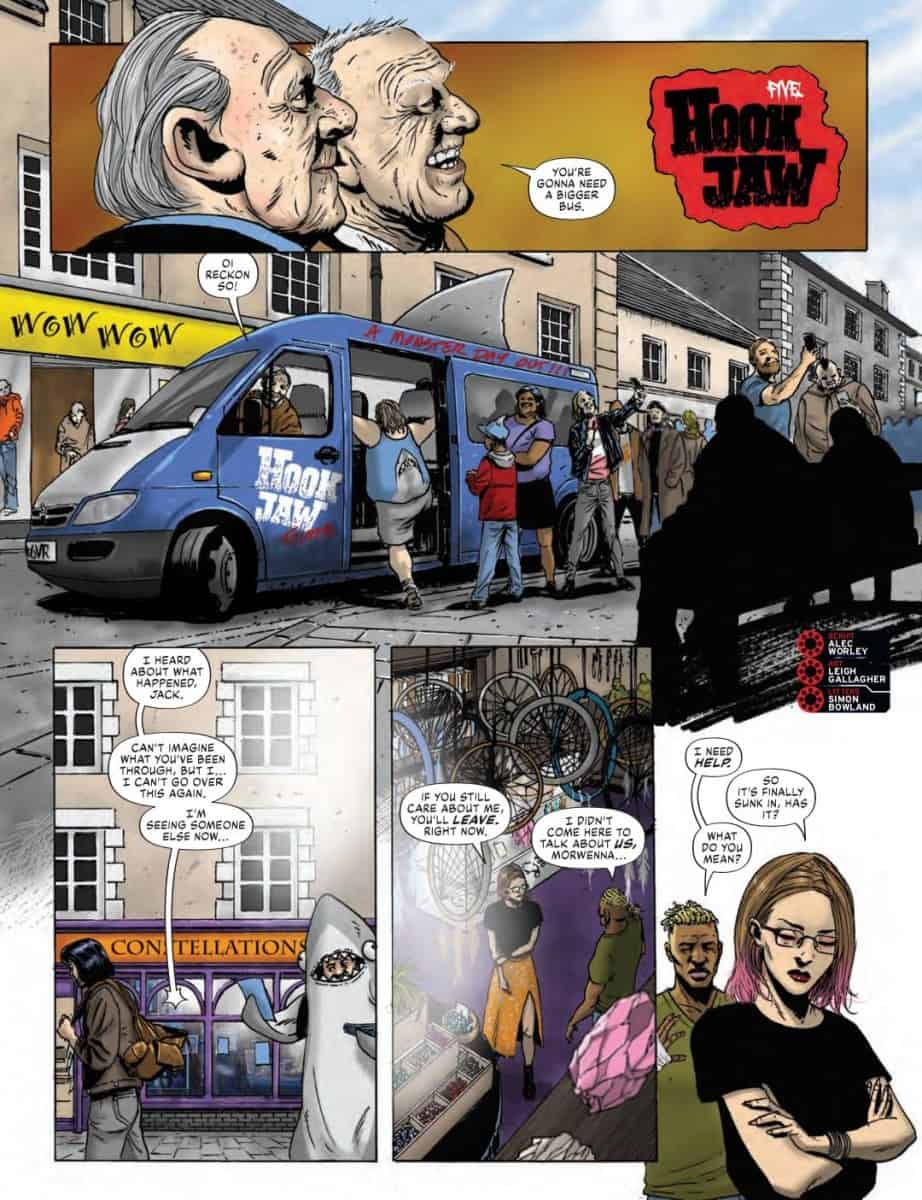