Rob Lake reviews Doctor Who: A Tale of Two Time Lords Vol.1 – A Little Help From My Friends… 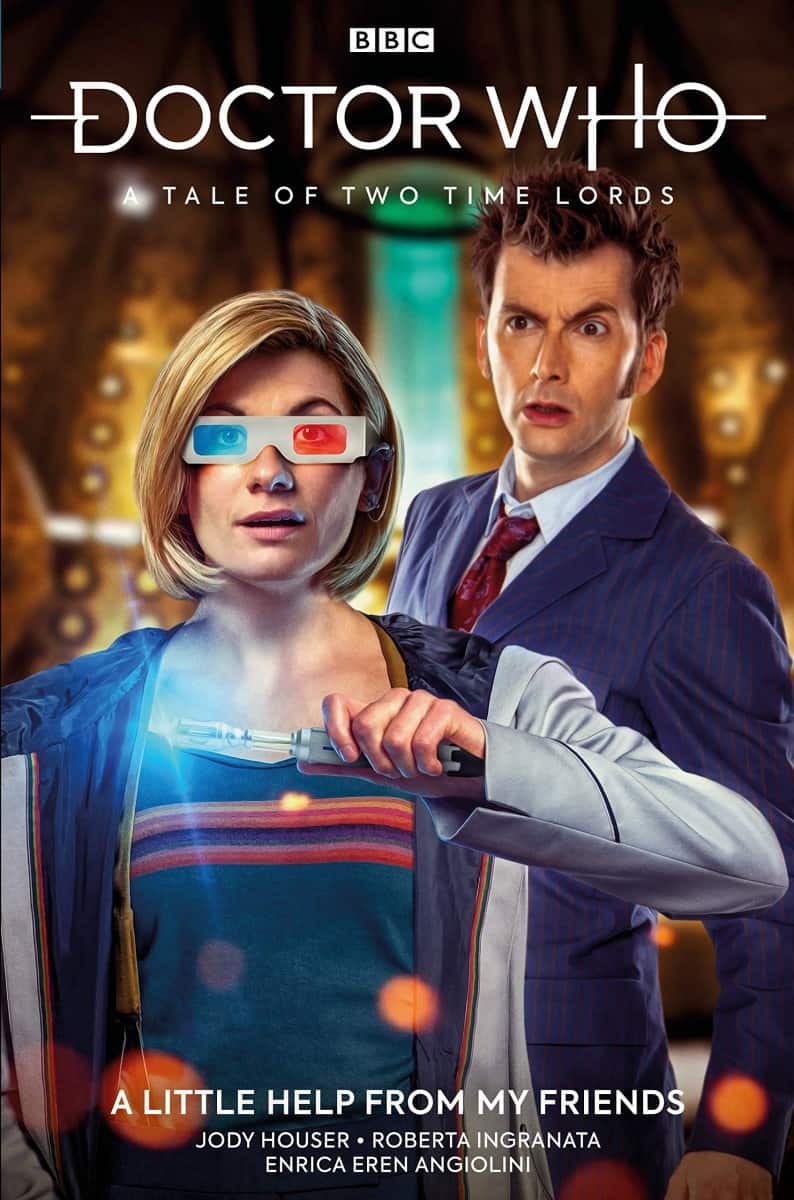 Doctor Who: A Tale of Two Time Lords Vol.1 – A Little Help From My Friends – brings Doctor Who: The Thirteenth Doctor Year 2 #1-4 all together into one collection.

This new Year 2 story not only features Jodie Whittaker’s Thirteenth Doctor but also brings back David Tennant’s Tenth Doctor. Both Doctors find themselves drawn into a plot that features fan favorites The Weeping Angels and also those pesky shop floor mannequins, The Nestene Consciousness.

With both Thirteen and Ten now stuck in 1969 we’re given that classic Who adventure with a tale that captures the spirit of the television series. We get everything from that initial wow factor of the companions to the gritty darkness that foreshadows most Doctor Who adventures.

For fans of the television series it’s worth watching the Season 3 episode ‘Blink’ before starting this Doctor Who tale. The reason why is that during ‘Blink’ Ten and his companion Martha are zapped by the Weeping Angels back to 1969. Whilst we then followed Sally Sparrow in the present time, this team-up with Thirteen explains the missing time that Ten and Martha had from being in the past to getting… back to the future!

The brilliant Jody Houser pens this team-up tale and as always she does a fantastic job in capturing the essence of what makes Doctor Who great. Her story is filled with many of those signature Doctor quirks that make both Doctors likeable. Everything from Ten’s arrogant bravado to Thirteen’s more logical approach and expertly captured. The same can be said for each Doctor’s companions in that this cast of characters are portrayed so well that you can picture the graphic novel playing out on screen. 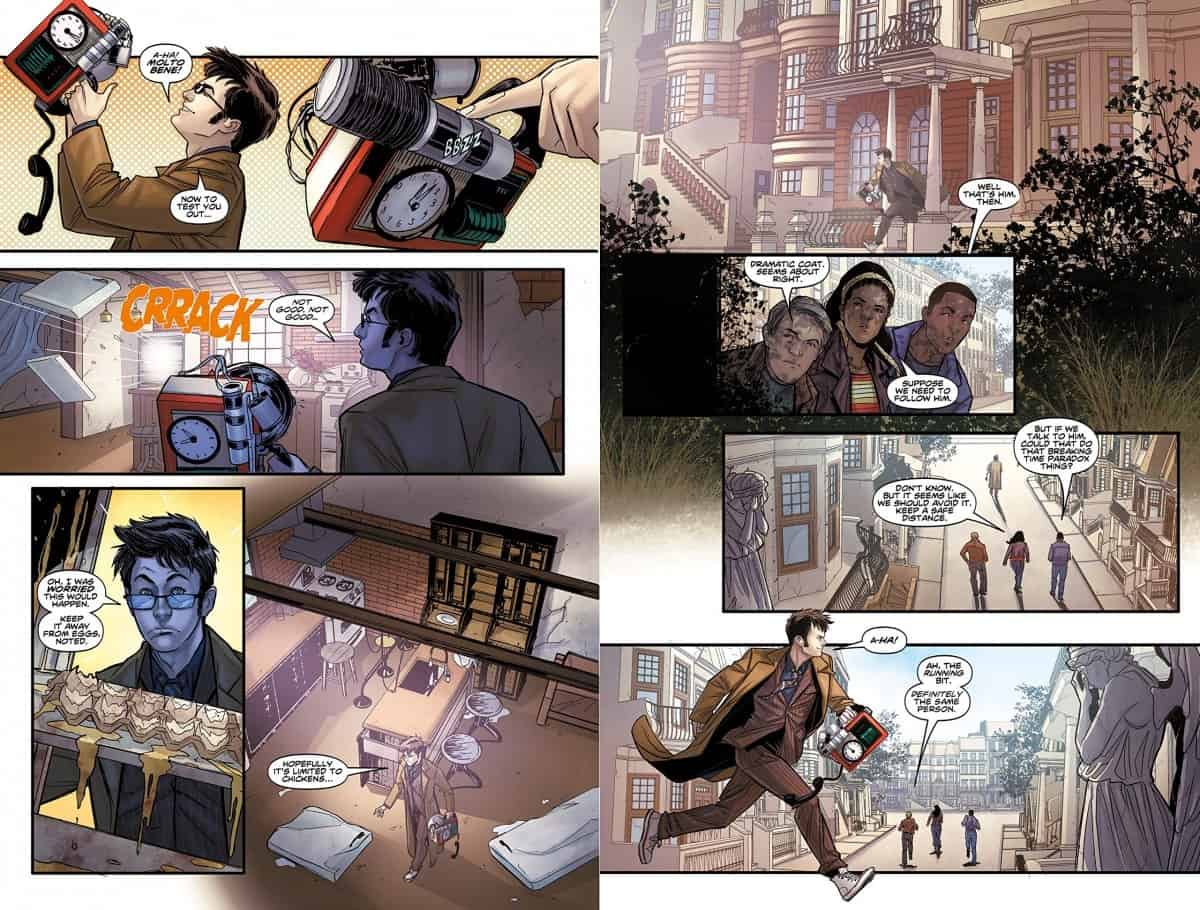 Roberta Ingranata adds some fantastic art to this tale, and along with colourist Enrica Angiolini they capture the likeness of both Doctors and their companions to a tee. The same can be said for the environment of 1969’s London. There’s great use of both dark and light colours throughout and both Ingranata and Angiolini work wonders to highlight the others talents. There is a fantastic scene in which Ten recounts the events leading up to his displacement and the whole scene plays perfectly. Going from the bright streets of London we’re suddenly thrust into the dark looming shadows of the mansion from ‘Blink’. It’s one that’s full of Ingranata’s detailed line work with a great mix of Angiolini’s colour palette that ever slightly hints at the danger yet to come.

The highlight of the whole adventure comes when Thirteen and Ten finally come face to face. Jody Houser writes it brilliantly as we go from the all familiar “still not ginger” to both Doctors bouncing ideas off each other like they’re old pals. There’s even a touching moment where Ten mentions Rose Tyler for Thirteen to cut him off mid sentence. Its a great small piece of character building and shows that even after three regenerations, saying bye to Rose is something that still hurts the Doctor. 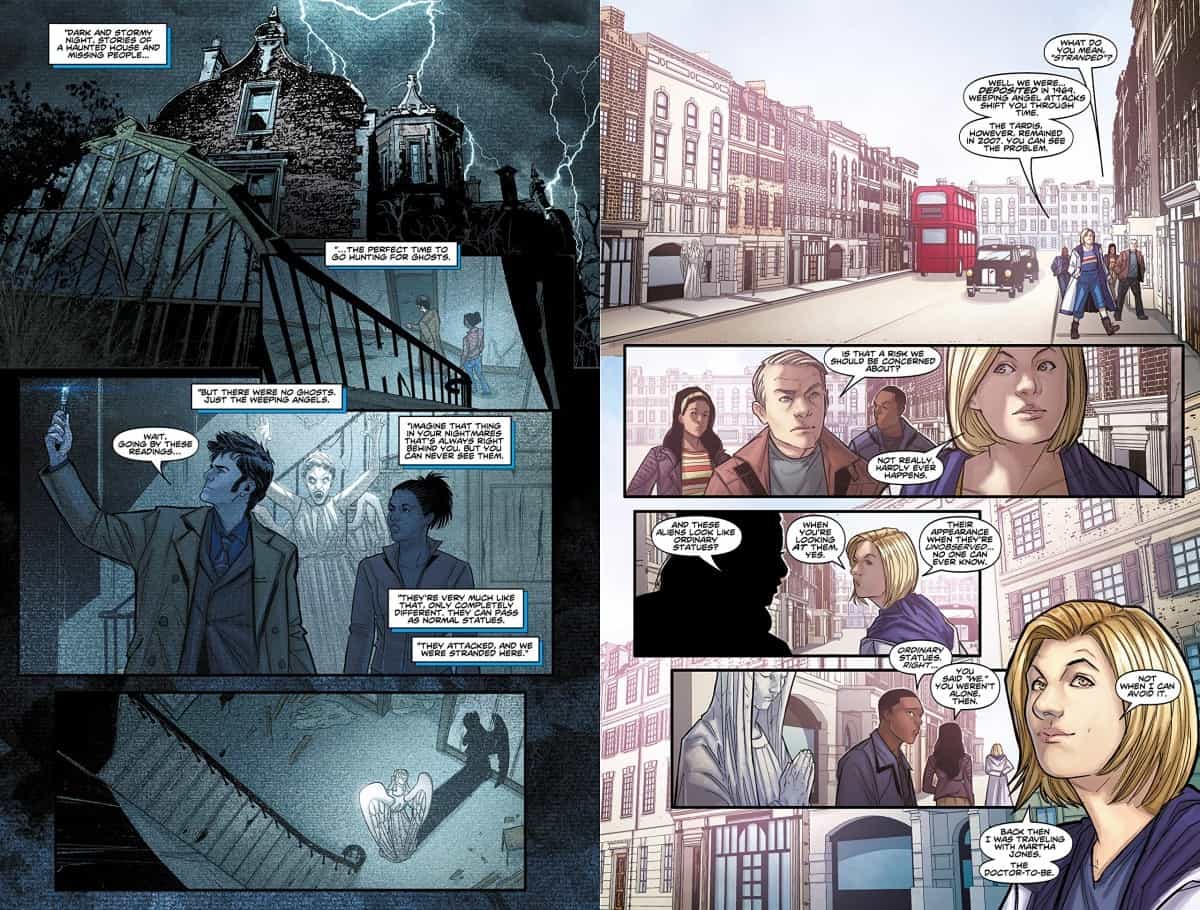 This adventure ends with that typical Doctor Who cliffhanger of more danger yet to come. Whilst Ten moves on to kick start the Time Lord Victorious arc in Defender of the Daleks (you can read my review of that by clicking here),we have to wait a little while longer to catch up with Thirteen, Grahame, Yaz and Ryan.

Doctor Who: A Tale of Two Time Lords Vol.1 – A Little Help From My Friends is a fantastic Doctor Who tale. It’s got everything from the television show and makes for that classic Doctor Who adventure. Jody Houser and Roberta Ingranata both craft a fantastic tale that’s full of mystery and light heartedness that paves the way into the tension that’s slowly coming to boil in the background. Both the Weeping Angels and the Nestene Consciousness make for great enemies and are both used brilliantly within this tale.