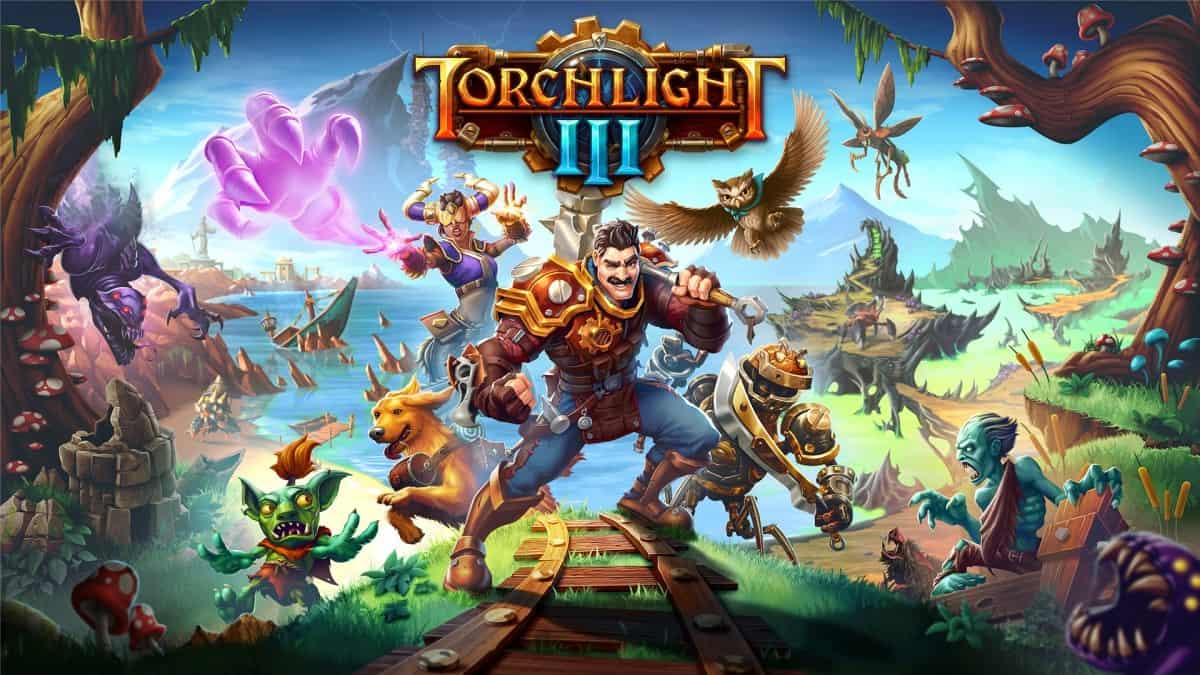 Torchlight III is the re-worked version of failed MMO Torchlight Frontiers. Taking gameplay back to be more in-line with its predecessors, Torchlight III features both single player and online co-op, in what promises to be an adventurous return to the franchise’s roots.

I first played Torchlight way back during the days of the Xbox 360. The then Xbox Arcade title was to me as close to Diablo II as you’d get playing on a console. Its simple gameplay didn’t offer me much in the way of plot but its world of sprawling dungeons captivated me in exploring as much of it as I could. Sadly I skipped over Torchlight II, and thankfully Torchlight III doesn’t punish me for doing so.

Set one hundred of years after Torchlight II, the world of Novastraia is changing and the Ember Empire is in decline. Due to this the Netherim and its allies threaten to plunge the world back into darkness and it is up to us to stop this from happening. The story is pretty simple and uninspiring and to be honest you forget why your fighting pretty early on which is a real shame. Typically in any role-playing game the townsfolk have you running errands left right and center. Torchlight III is no different and a lot of the quests have me slaying bosses and fetching items.

When it comes to creating our hero Torchlight III has four options. We can chose from Forged, Railmaster, Sharpshooter and Dusk Mage. My hero was the Railmaster who I affectionately called Joe Dredd (no guesses as to why)  The Railmaster is your typical hybrid DPS/Tank who quite literally steamrolls through enemies with hard hitting weapons and his own customisable train. Coupled with my choice of Flame Destroyer relic I was dishing out fire damage like there was no tomorrow. Each class is further upgraded via unlockable skills which unlock as we level up. It’s not particularly in depth and you can have every passive and active skill unlocked by the time you reach level 20. 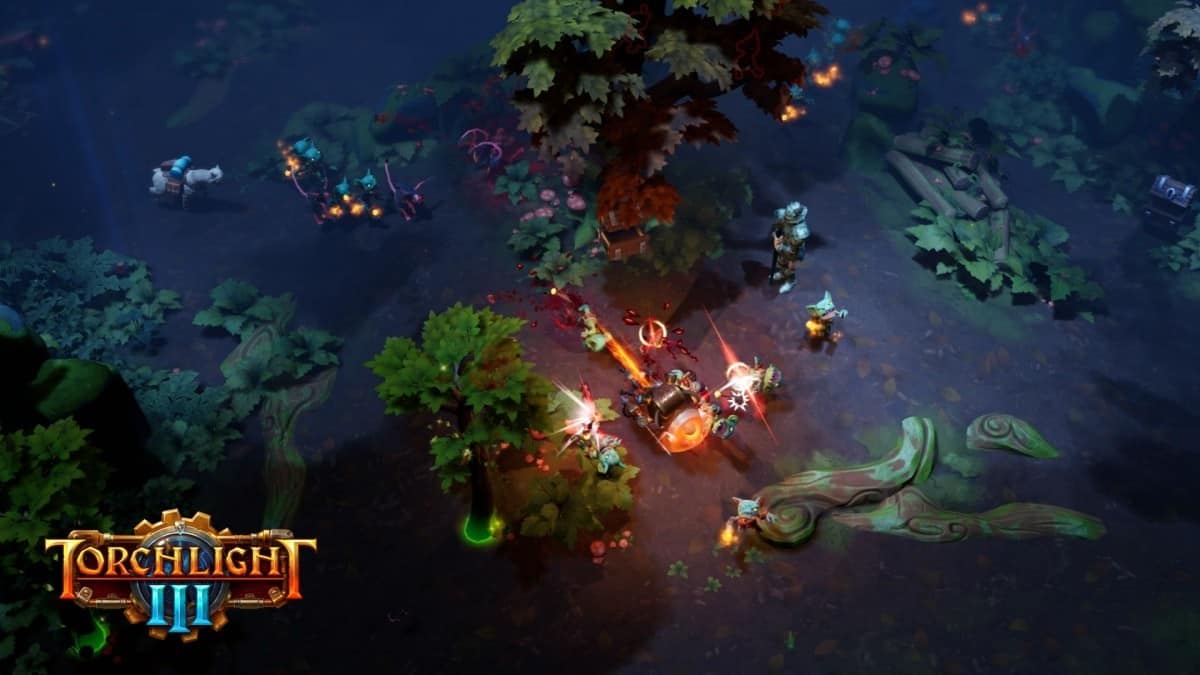 We also get the option to build our own fort and on paper sounds like it could be a lot of fun and in part it is. At our fort we’re able to refine crafting materials, create statues and monuments and house the menagerie of pet companions that we find in the world. Delving in a bit deeper and the fort is a little lackluster. Its only real use is for us to be able to store equipment and swap out our companion. The camera angle is locked as well so we can only zoom in and out rather than the full 360° freedom that we have when we’re out in the game world.

Gameplay is much like your other traditional ARPG games. There is an adjustable difficulty setting much like the one seen in Diablo III, which allows for a greater risk vs reward challenge. Our pet companion can be sent back to town to sell our unwanted gear and in turn this makes inventory management a breeze. Loot is made up of both weapons and armour and there is a good selection of both available to collect. Those of us looking for a more robust attribute optimisation system will be disappointed with loot optimisation being extremely streamlined to get you back into the fight quicker.

The visual world building is more robust than those seen in the previous titles. Torchlight III‘s aesthetics mixes fantasy with steam punk to create a colourful world full of flashy blasts of magic and retro-futuristic weapons and armor. The tone and art direction are a welcome change to the normal gothic, dark and gloomy landscapes of the genre, even if some areas feel all to clichéd. Enemy mobs are plentiful and the unfolding battles fill the screen with bright colourful flashes and the screaming clashes of steel. Bosses are your typical ARPG affair and can take a fair amount of punishment before they fall. As mentioned before the difficulty can be adjusted for a greater challenge, though the game feels best ploughing through the mobs at high speed, rather than slugging through a challenge your Hero isn’t quite ready for.

Once the campaign has been completed we open up a small amount of end-game content. This content includes an enchantment system, a new focus on crafting and ways to further customise our fort. The main draw of the post-game content is the dungeon system. A new character sets up shop in the town and gives you access to a near endless amounts of dungeons to explore and more importantly loot. These dungeons get increasingly difficult the further we go, with each floor having modifiers active that effect gameplay and tougher enemies to fight. The end-game content, much like the campaign can also be played on co-op. Torchlight III supports up to four player online co-op and is extremely fun to play especially with all the chaos unfolding on the screen when the party attacks. 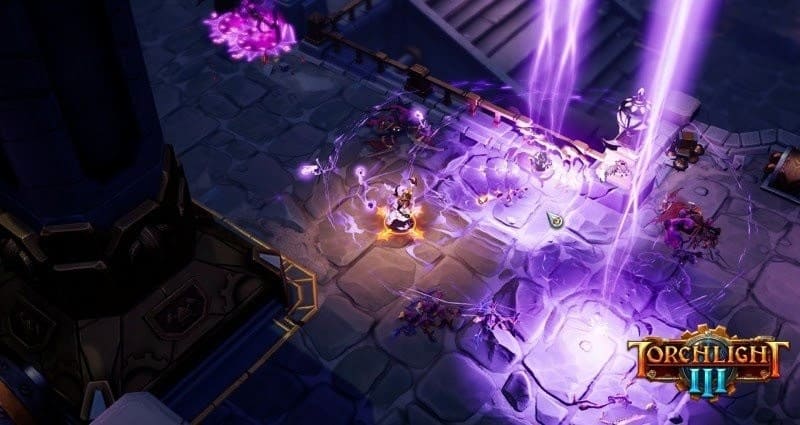 Torchlight III is in some ways a vast improvement on its predecessors and in others is a step backwards. It’s easy to see how its development started as Torchlight Frontiers with some of the freemium elements still included in the framework. The gratuitous destruction is often great fun but can get a little repetitive as the hours go on. Thankfully this repetitiveness can be offset by the wealth of weapons and even discovering a new character class. Torchlight III is an approachable ARPG that is especially welcoming for newcomers. Its simple gameplay and inventory system allows you to get straight into the action. Those looking for a more in-depth character building system will need to look elsewhere, but if you want a laid back game that doesn’t require too much thought then Torchlight III has you covered.

Cons:
– Can be too simple for ARPG fanatics
– Generic fort building
– Screen can be chaotic at times