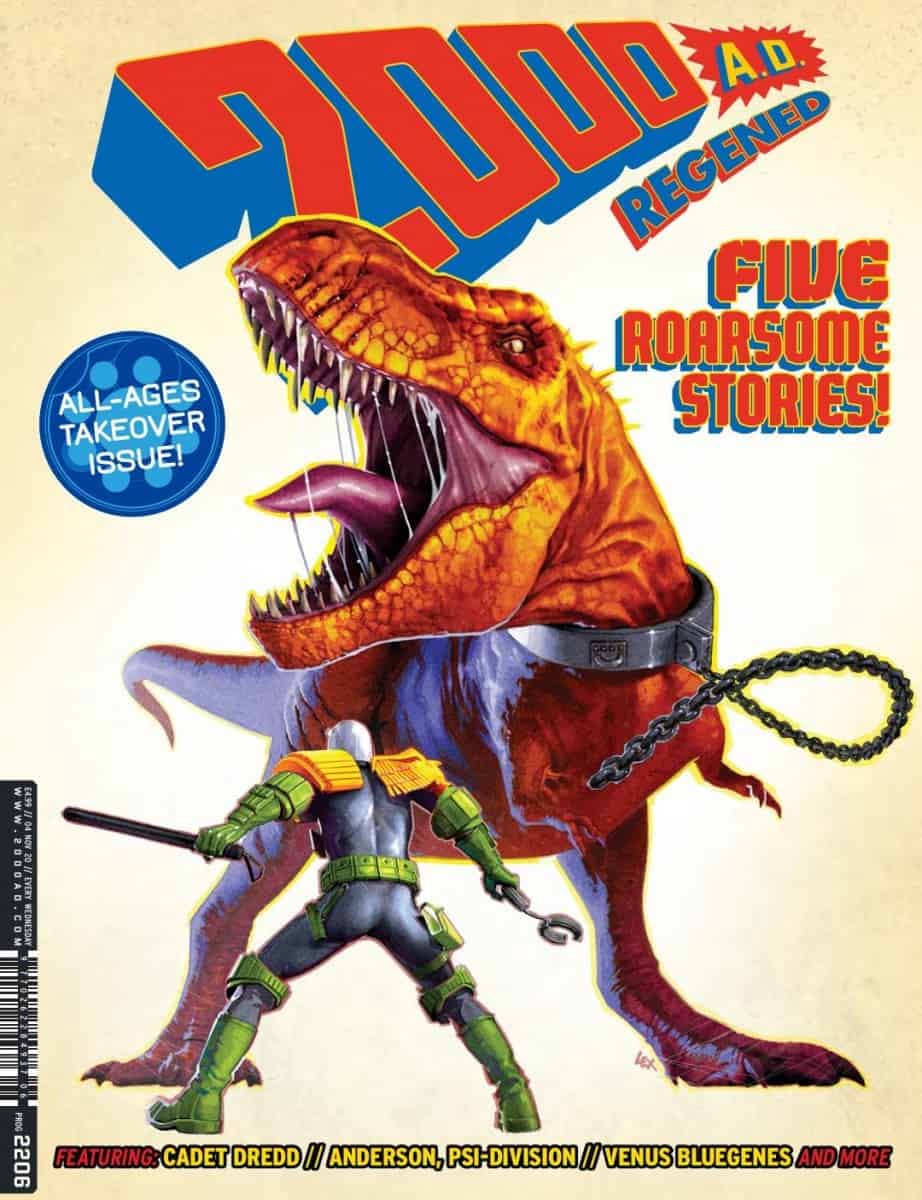 Tharg is taking a well earned break this week and in doing so hands the reigns over to Jojo-Jargo. Yes, it’s time for another installment of the all-ages Regened-themed Prog with all five stories being aimed towards the younger generation of comic book reader.

We re-join Cadets Dredd and Rico as they make up part of an exhibition to the Cursed Earth. Much like the Cadet Dredd strip from the last Regened Prog, both Dredd and Rico are a little older and further along with their training.

Cadet Roxanne Vella – our narrator – Dredd and Rico are sent looking for help for the injured members of their transport. Soon the trio stumble across some of the local Mutant population being harassed by the local Warlord and the Cadets set about doing the right thing.

I have enjoyed Michael Carroll’s last two Cadet Dredd stories and its nice to see the slightly more experienced Dredd in action. Carroll’s plot is very reminiscent of an old Spaghetti Western as the good guys battle to save the helpless from a local warlord/gangster or corrupt official. Nicolo Assirelli has time to shine with a longer strip and the art really opens up throughout Cadet Dredd. 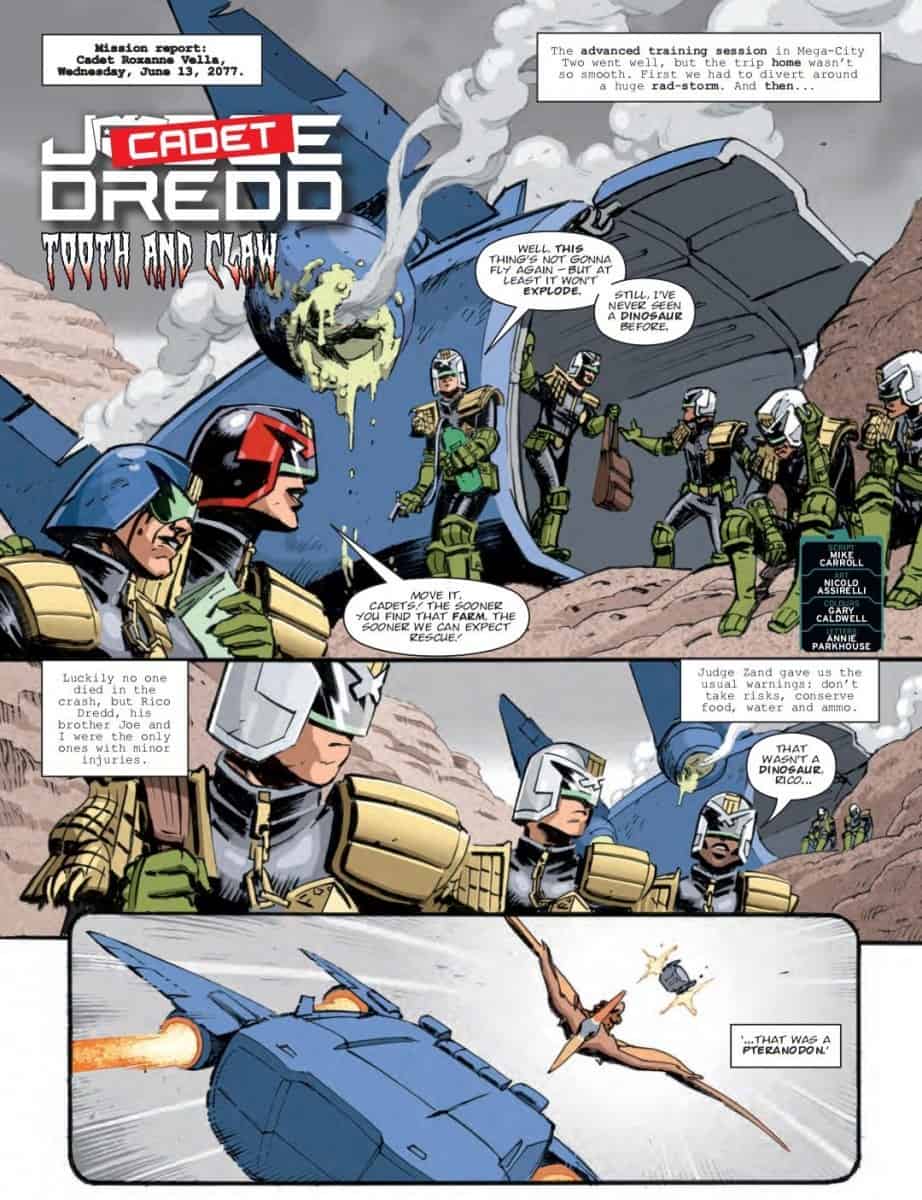 Abelard Snazz: The Only Way Is Up

Alan Moore and Steve Dillon’s man with the two-storey brain is back!

We re-join Abelard as his reputation is still on a high. People from across the galaxy come to Abelard for advice and in return they offer him riches and plenty of flattery. Trouble is that Abelard might be smart, but his track level on improving things is as low as it could possibly go.

What follows is a sub-atomic adventure as Abelard and faithful droid servant – Edwin enter a realm where everything is held together by people’s beliefs.

Paul Cornwell and newcomer to 2000 AD Anna Reedman bring us a mad cap adventure at a sub-atomic level. The writing is great, the art is great, and this one’s been a fantastic way of bringing Abelard Snazz back to the forefront. 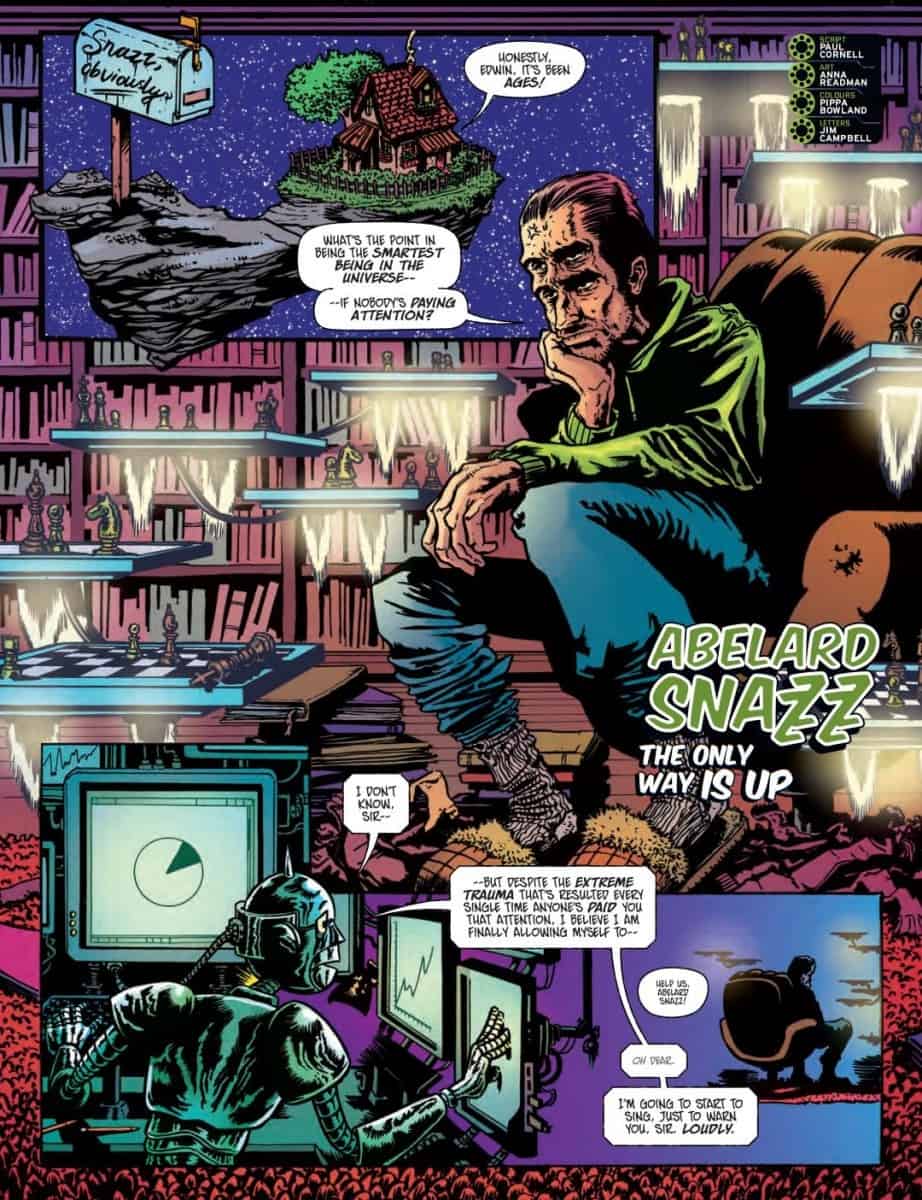 High above the toxic wastes of Nu-Earth Clone Soldier Venus was created to serve her Souther masters on the orbital platform Milli-Com.

Venus however had other ideas and in this all-ages tale she’s found her way down to the surface of Nu-Earth. Now classed as threat level zero, Venus finds herself forced to work in the mines. But this is Venus Bluegenes… Genetic Infantry and she doesn’t take kindly to being told what to do.

There’s plenty of characterisation here which does wonders to introduce new readers to a new character, or reintroduce older readers with a new angle. With plenty of action and a very slight sociopolitical message Threat Level Zero was a joy to read. 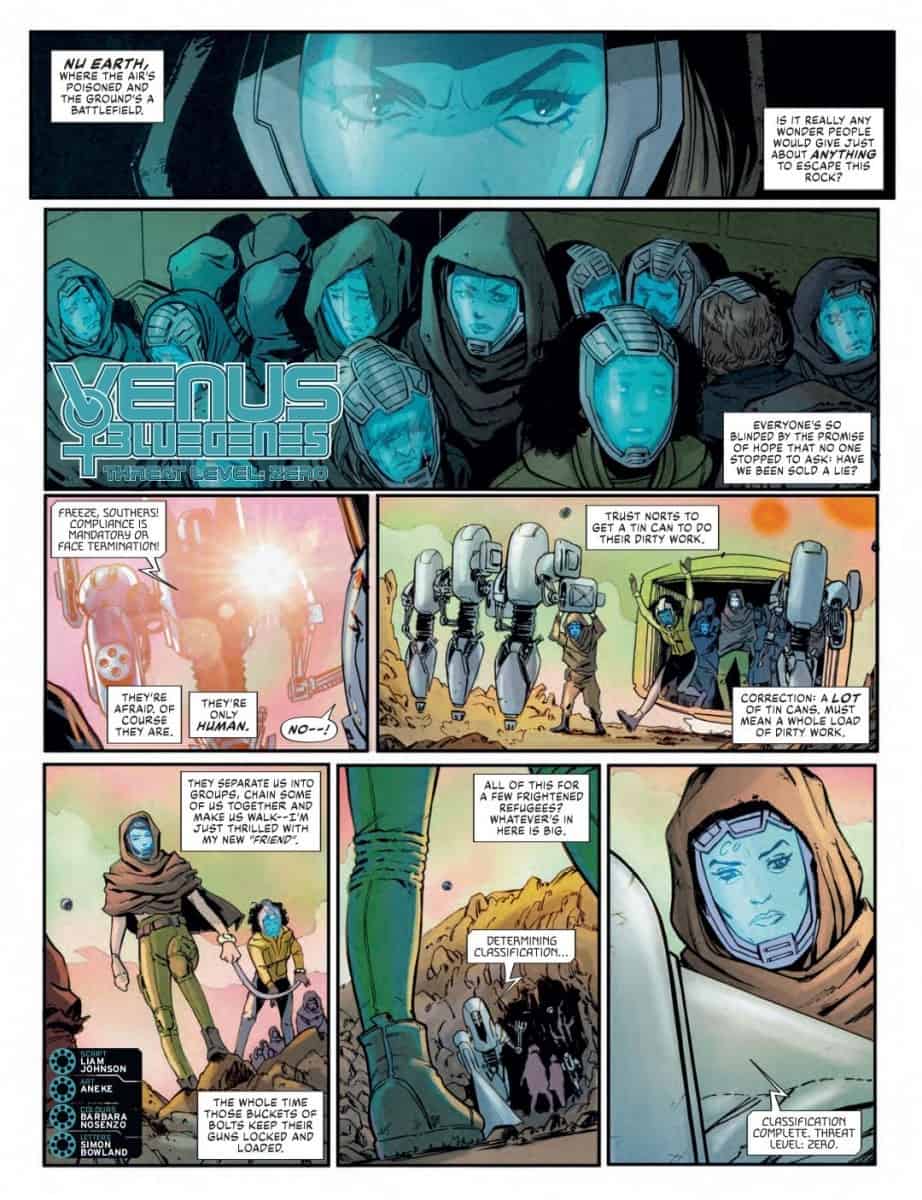 Future Shocks: For The Man Who Lives Everywhen

Time travel is the nature of this Future Shocks tale. Travelling forward in time isn’t the problem, its coming back that is. Professor Norman Collins isn’t bothered about this. The good Professor is busy basking in the light of his greatest achievements. The downside is they’re not really his achievements and various Time Truthers want a word!

Future Shocks are at their best when they throw the weird, wonderful and bizarre at you. Whilst For The Man Who Lives Everywhen isn’t as thought provoking as previous Future Shocks it is a nice little tale of jealousy and revenge. Whilst you can certainly pick holes within the relativity of time travel, Karl Stock and Tom Newell give that question an all-ages spin. 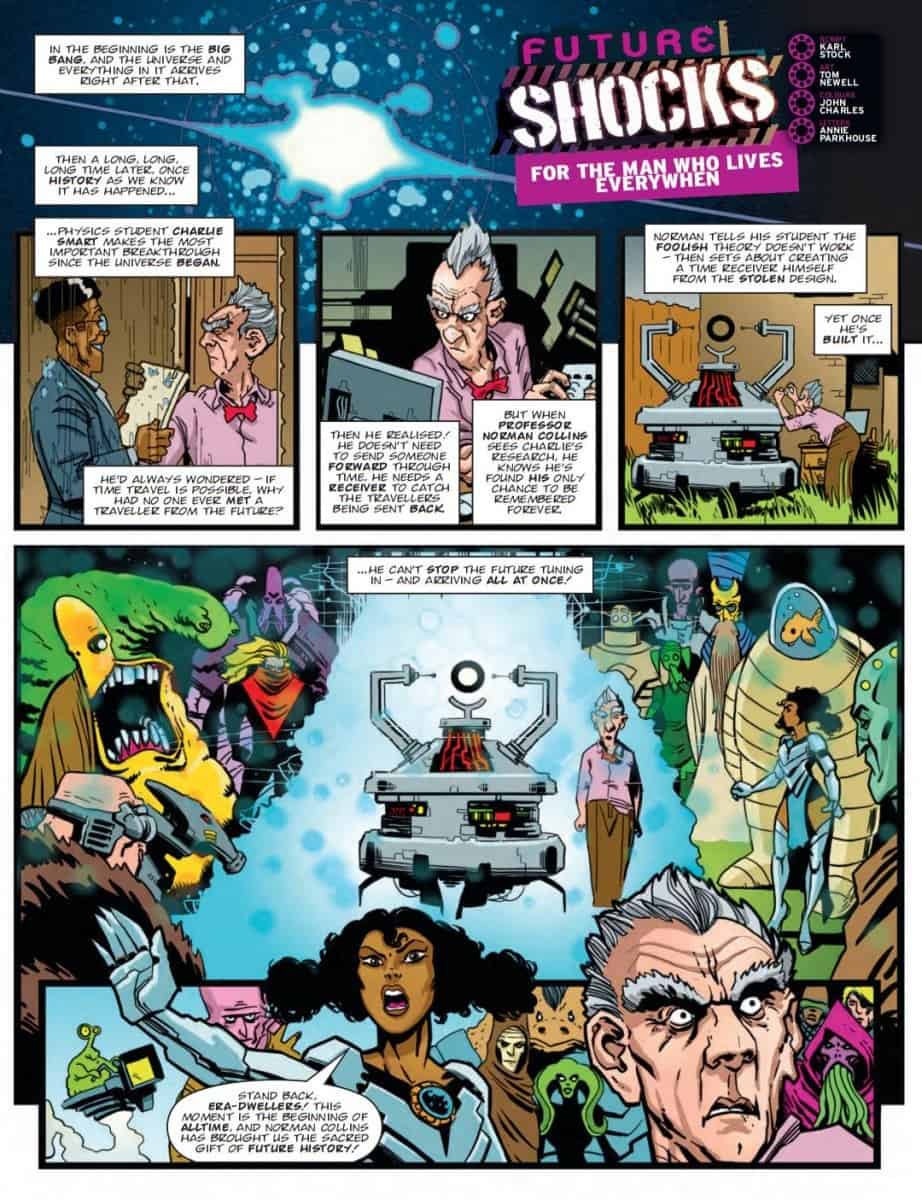 Anderson leads the way in this one. Our favorite PSI-Judge is on the trail of a Mega-City One Cit who just so happens to harbour a particularly nasty alien infestation.

The opening two pages of this Anderson tale are beautifully presented and really set the tone of Early Warning. What particularly took my fancy in this one is that Cavan Scott adds a little bit of continuity to the tale with a reference back to Prog 2183, which also gives us a little bit of a “to be continued” as well. It’s a solid self contained story, with Paul Davidson giving us a nice MC-1. 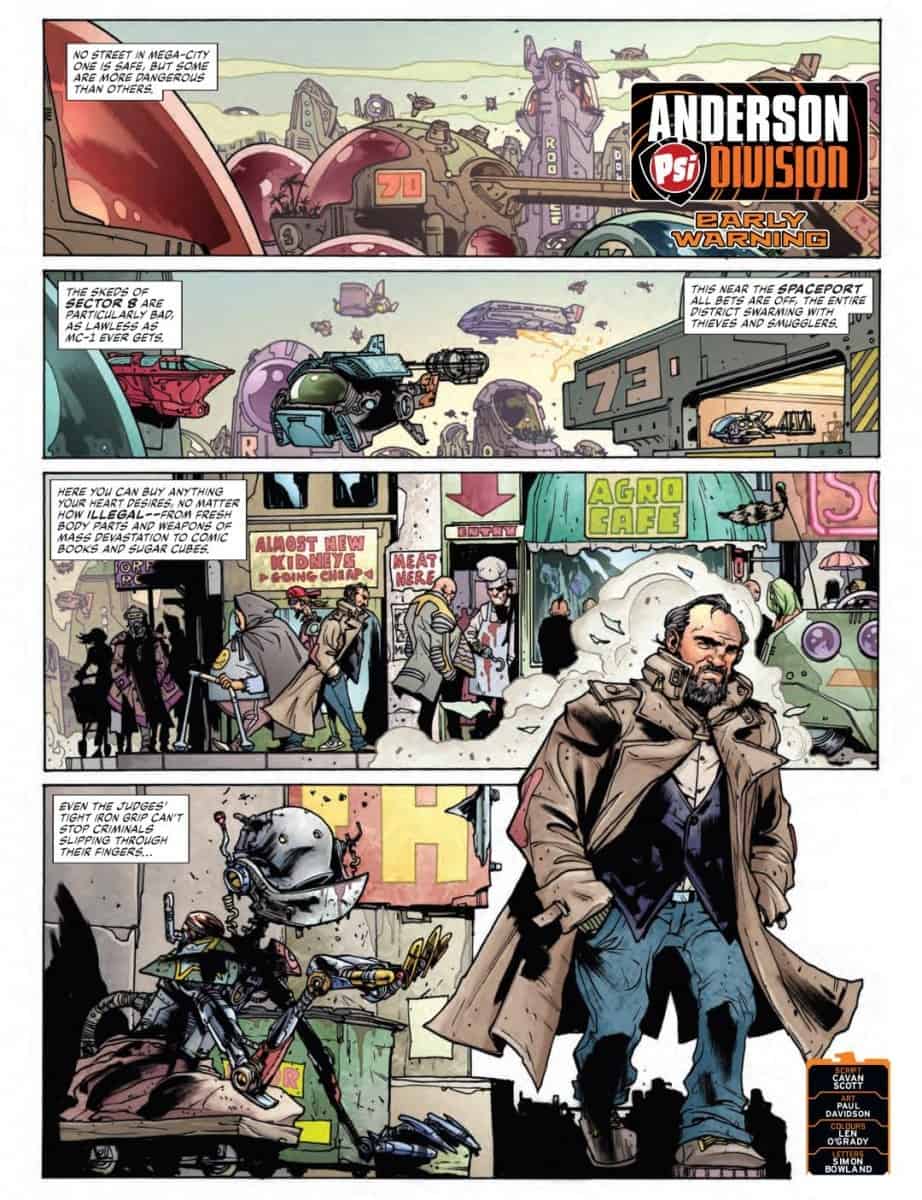