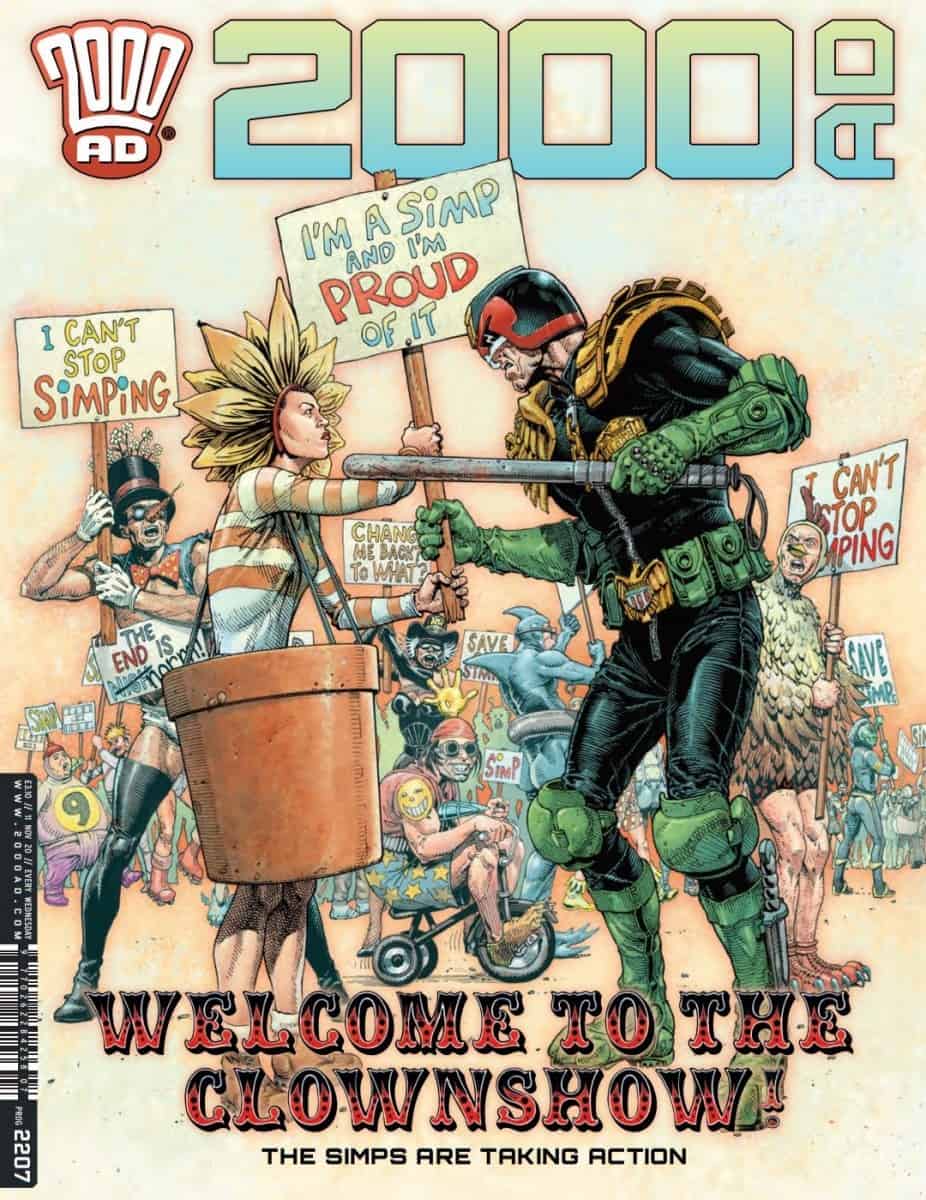 After last week’s Regened Prog, we’re back to business as usual this week with Prog 2207, which means the oh-so familiar “fab five” of the previous few weeks are back again!

Simp conversation therapy is the newest thing to hit the streets of Mega-City One. With the weird and wonderful types of the Meg now being offered a chance of ‘normality’, it has naturally got the Simps up in arms. Dredd’s not one for the Simps and their zany lifestyle but, when your Wife’s been turned Normal against her will, who do you turn to?

Its a good start here for Simply Normal. What feels like it is going to be your standard Dredd affair is soon turned into something deeper. Kenneth Niemand and Steven Austin nail this one and Simply Normal is yet another Dredd story that’s closer to the real world than fiction. 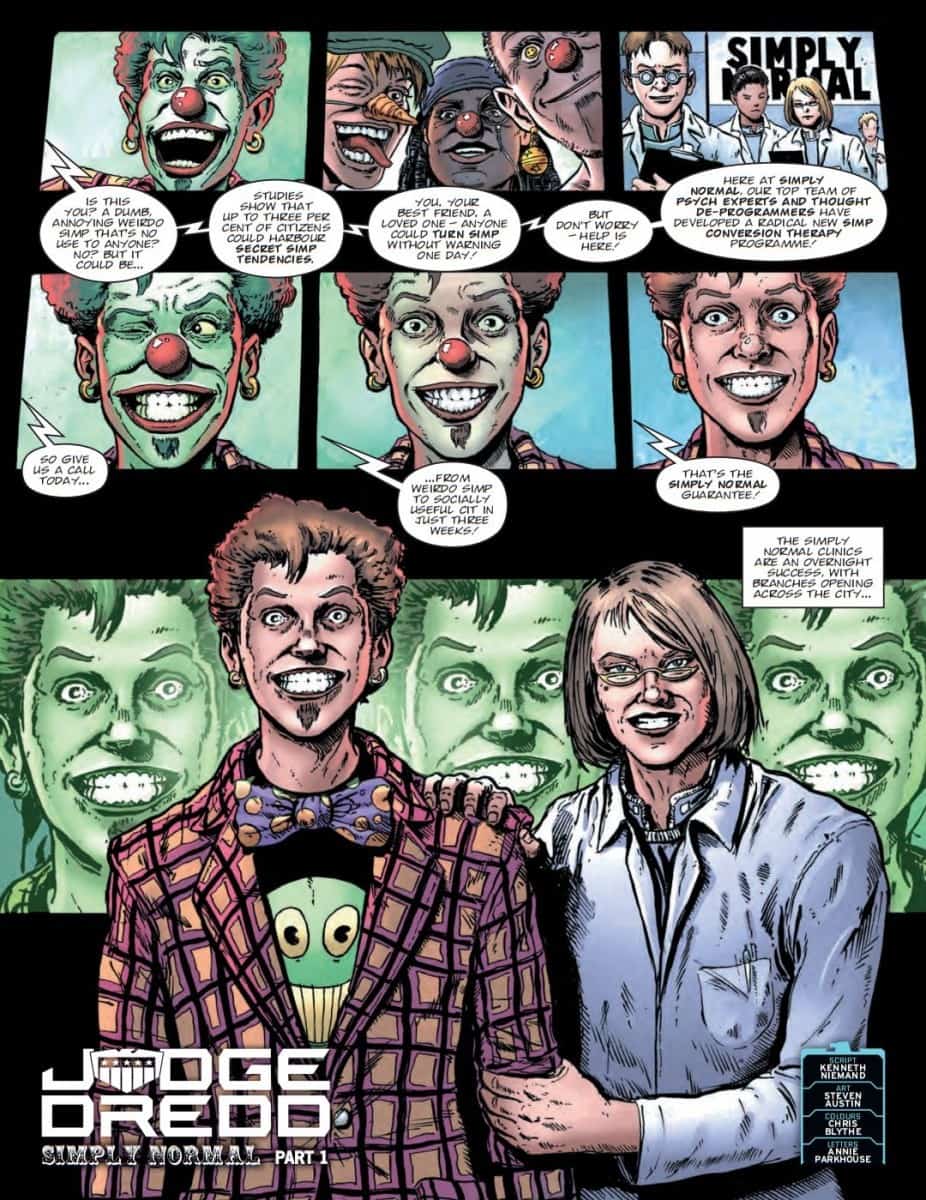 There’s a giant monster floating in an egg-sac in the skies above London. Not something you see everyday – well unless you’re Stickleback-Homes anyway. Valentine Bey channels his inner Power Ranger and tackles the interdimensional monster head on. This only serves to piss the thing off which is a really bad thing… a really bad thing!

Stickleback is rumbling on with Edginton eager to get everyone involved. The rampage through London was a nice distraction the previous weeks more contained elements. D’Israeli continues to produce some beautiful and stunning art work with the black and white style really giving Stickleback some clout. 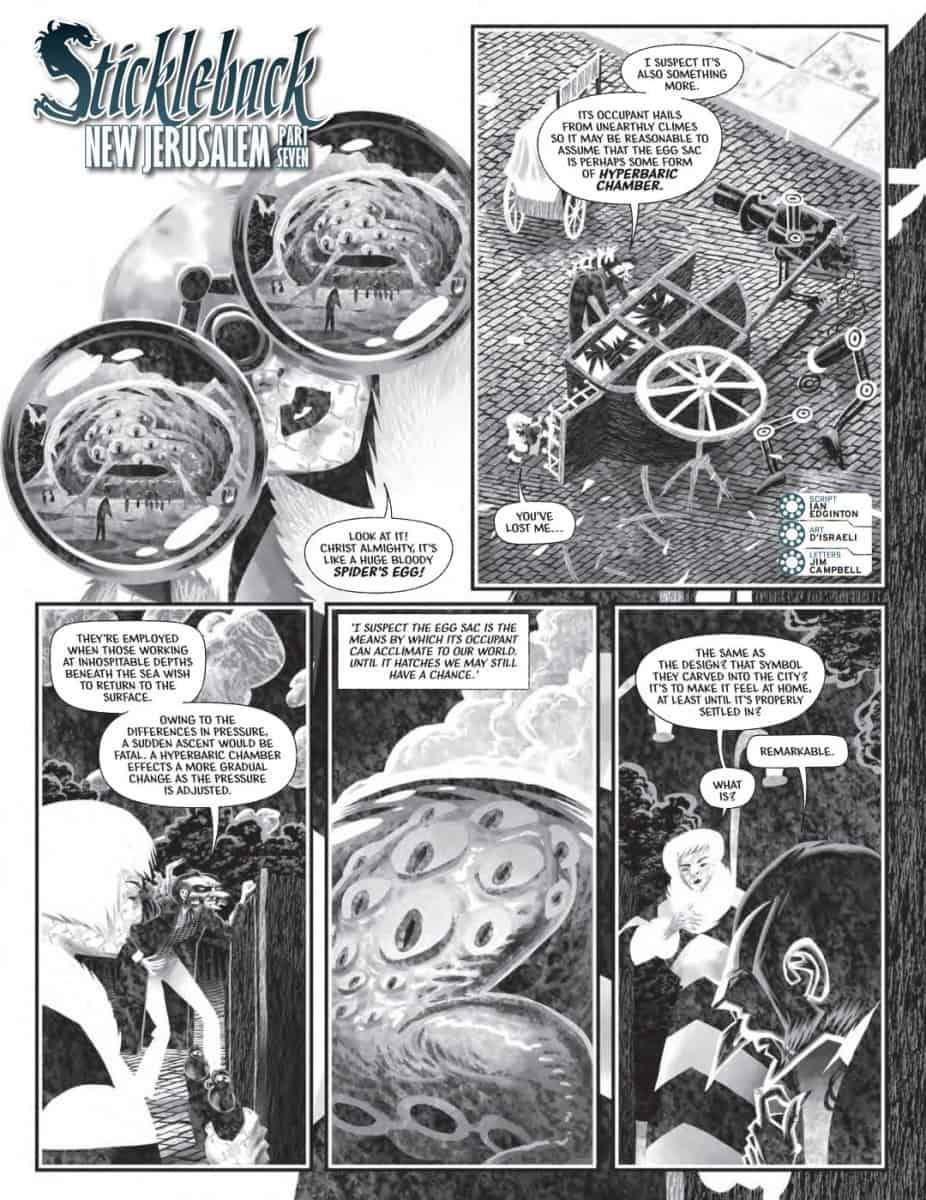 In a surprise reveal (that didn’t really surprise anyone), India’s manager is the culprit behind the Pop Princess’ recent ‘issues’. In a cruel twist he’s even tried getting her in on the act, with the promise of the threat to her life not effecting her album sales. Do we reckon he misses out the part of actually trying to kill her?

This then leads to more ‘skipping’ around the Cube for India and Nolan. With no signs of an imminent end, there’s plenty of time for more twists in James Peaty’s tale. 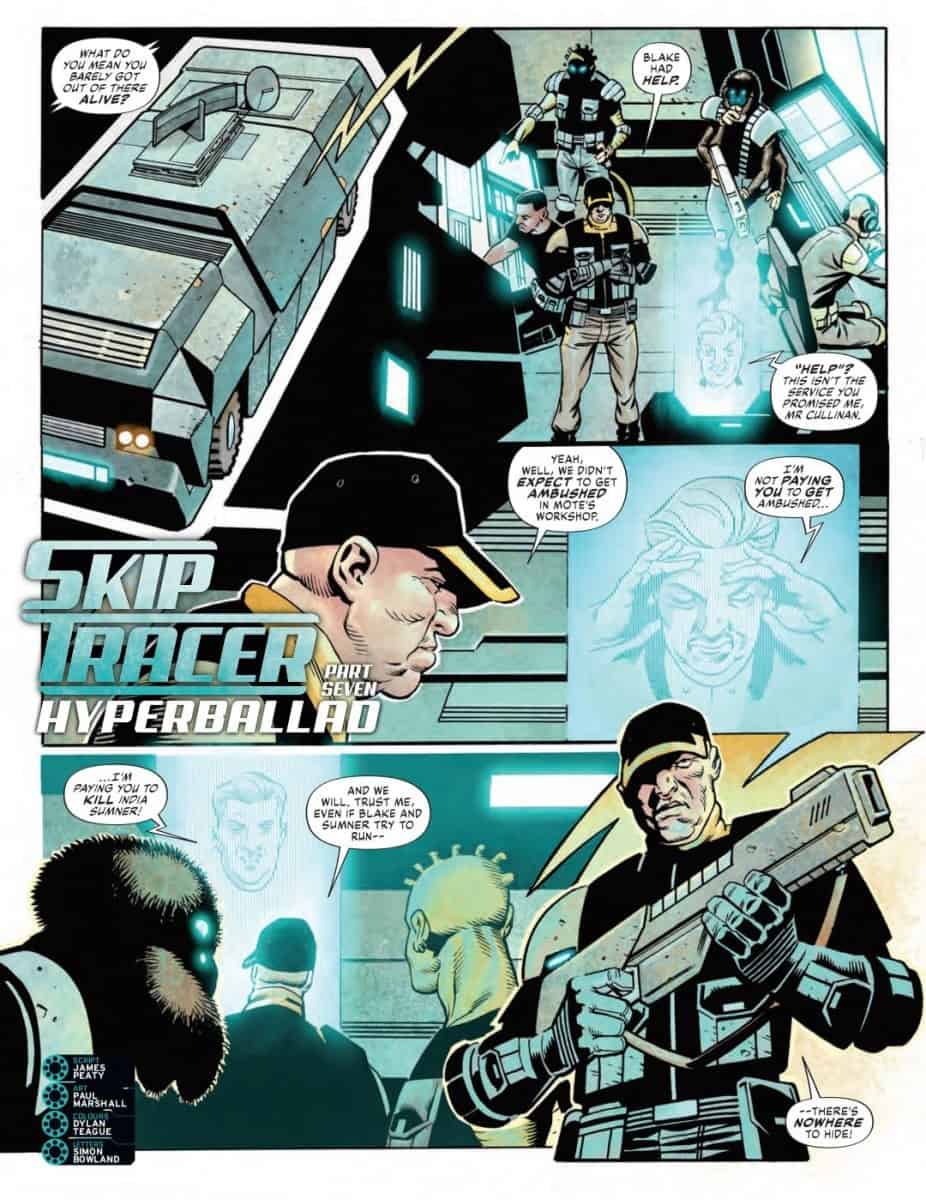 With the gentle part of Constanta’s story behind us we’re now up to the blood and gore part, while edging ever closer to how the Fiend became a Fiend.

Part 6 begins to sow the seeds to young Constanta’s downfall, but we’re not quite there yet. As always Trevallion hits the target with his art for Fiends of the Eastern Front. Much in the same way as D’Israeli’s, it’s just so stunningly beautiful. 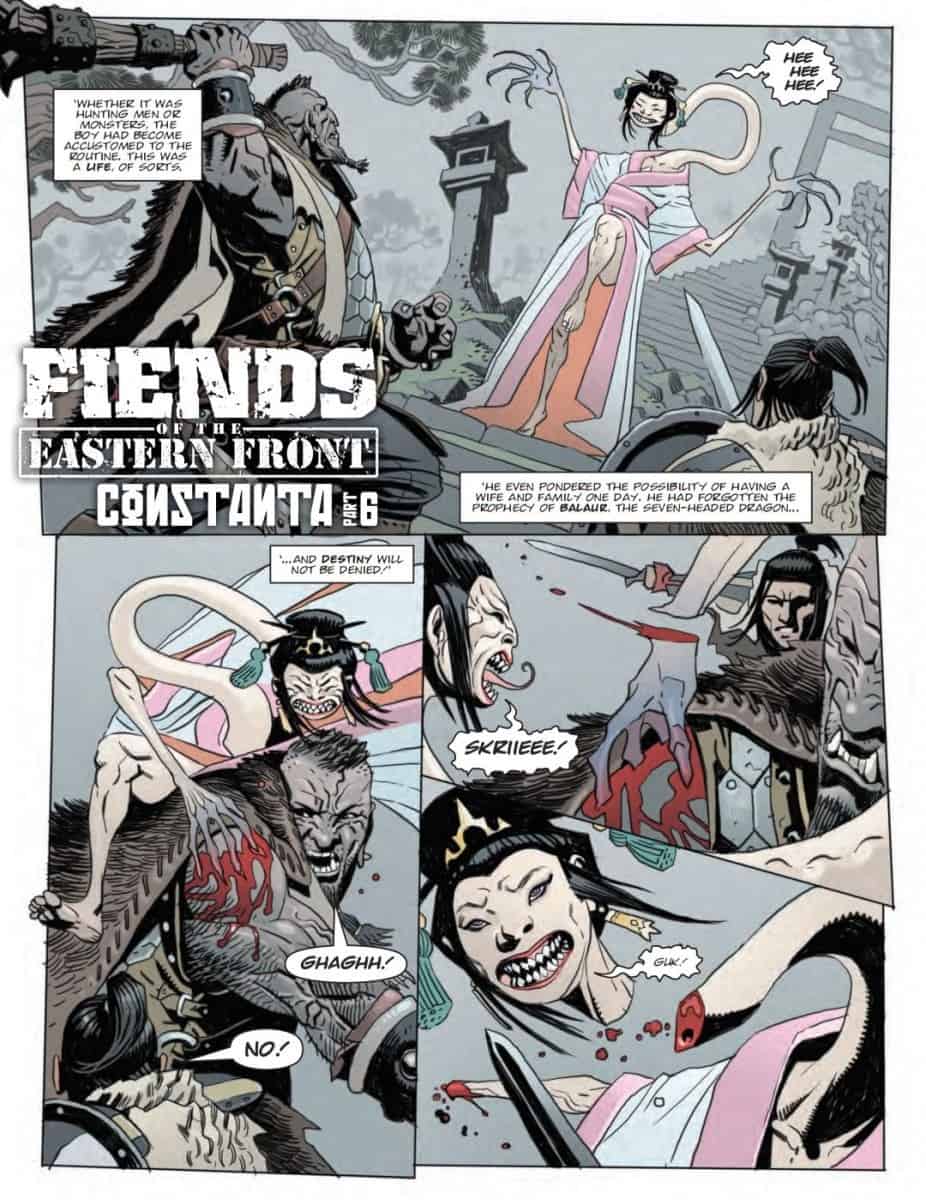 The town is now overrun with people all trying to capture a glimpse of the thing that’s devouring people left, right and center. The only hope of stopping Hook Jaw falls to the Witch (who summoned him in the first place) and her descendant Jack, who’s just as dumbfounded now as he was at the start.

As we’re drawing to the end, Alec Worley is laying a lot more out for us. Still no idea how this one is going to end, but its been a damn crazy ride so far.