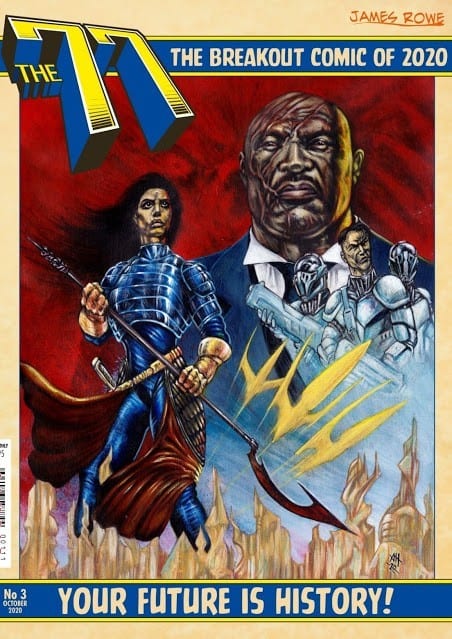 The arrival of issue #3 of breakthrough British comic The77 is just around the corner. The bi-monthly published is an oversized 68 page anthology that features a veritable who’s who of writers and artists.

What makes The77 unique when compared to many other independent comics is that its entirely funded via crowdfunding. Using the platform Kickstarter, The77 has so far amassed a staggering £20,000 which has been raised by over 1500 comic book fans worldwide. I was part of the crowd funding campaign for issue #3 and was amazed that the project reached its funding goal within five hours of going live! By the end of the funding campaign issue #3 had been backed by 330 fans and had raised £5,994.

Created by Steve Bull and Ade Hughes V tells the story of heroine Anat. Anat finds herself mysteriously transported to the future and is well and truly far from home. With Anat’s brother dying in the previous episode, Anat now finds herself allied with some mysterious allies. But what exactly is this technology they speak of and can they be trusted?

Steve Bull and Ade Hughes continue to work their magic in this installment. The world building continues with hints as to why Anat has been drawn to the future, but there is still a slither of intrigue being left in the shadows.  Hughes’ art is fantastic and the final page is particularly a thing of beauty.

Grid is a nice done-in-one strip brought to us by Dave Heeley and Neil Sims. Told over two pages Grid introduces us to Grid, who just so happens to be “the best hired gun in the country”. What happens next goes from quiet drink to full on murder as our ‘hero’ can’t switch off from work.

The Screaming Hand is a supernatural tale that follows Paul Stoneman as he searches for his kidnapped wife. In this episode Paul manages to track the perpetrators of his wife’s kidnapping to the East German Consulate.

The Screaming Hand is brought to us by Kek-W and Connor Boyle. It’s a brilliant tale full of that signature supernatural mysticism. Whilst the titular Screaming Hand goes about its supernatural shenanigans, Paul Stoneman both struggles to control it and search for his missing wife.

The Cell is pretty much how I’d always imagined what life in a Judge Dredd Iso-Cube would feel like. We follow 8ar8ara as she’s transported into The Cell. What follows is a harrowing journey through the legal system as she’s found guilty of various crimes against the community. With a huge twist coming at the end, what happens next is anyone’s guess.

The Cell is brought to us by Bambos Georgiou and Andrew Sawyers. Andrew Sawyers, much like Neil Sims, has been a really breakthrough star thought the previous issues of The77. He has a fantastic mix colour and energy to his art that when coupled with Georgiou’s script paints a very dystopian future.

A Victorian-era Clipper floats abandoned somewhere in the North Pacific. A flash back then introduces us to the not yet abandoned H.M.S. Catullus as her crew start to notice strange things stirring in the waters.

Dave Bedford and Ben Macleod have something special with The Trackless Depths. From Bedford’s atmospheric script to Macleod’s amazingly detailed greyscale artwork, this ones one of the many hidden gems inside of The77’s cover. More please!

Matilda Atkins and the Amulet Of Destiny

Out of place school student Matilda Atkins receives a mysterious pendant during a school history lesson. Once in her possession the amulet seemingly sends Matilda off on a grand adventure. But with no one else remembering the lesson or the mysterious Doctor Pemberton, how can the Amulet of Destiny be real?

Brought to us by Michael Powell and Sarah Millman this ones a story that’s aimed more towards the younger comic book reader. Millman’s art is an instant hit as the clean lines and bright colours grab you from the get go. With the ‘All-Ages’ comics seeming to be a hit once again I hope we see more of Matilda Atkins in The77.

Commander Shard recalls his service history under the mysterious Grakon. With countless Civilisations either converted to other Divisions under the Grakon’s control or outright destroyed, Commander Shard sets out to find answers. But not everyone under his command agrees with his actions.

Divison 77 is my number one strip inside The77. It’s got everything from a conspiracy laden script to a tonne of action and so much sci-fi goodness. Everything about Division 77 just screams 1980’s sci fi to me and I wish it would go on and on and on. Dave Heeley and Sinclair Elliot take bow!

SGT Shouty of the Moon Force!

Lew Stringer takes us back to the Beano with his story of SGT Shouty. It’s a brilliant one pager full of that classic Beano story telling. I especially love Doctor Edwin Plank whose look reminds a lot of Mysterio from Marvel’s Spider-Man.

A man wakes up confused in a street with no memories of who he is or how he got there. With no memories the police track down the man’s family who claim that he was buried a week prior to his arrival on the street. With a recurring dream of a mysterious plant and a Lady dressed in white, ‘Kavan Sakar’ sets out to find the Talirantula Hyvius.

This once a nice little mystery that has a clear beginning and a very wide open ending. Without going into spoilers, Anna Everts and Phil Elliott left me wanting more of Kavan’s story.

After getting unexpectedly knocked out, The Jack of All Trades awakens in a sticky situation. Tasked with retrieving a weapon for an enemy who resembles Shao Kahn, our ‘hero’ sets off to the flooded Fairground.

Undertow’s first outing was a bit lackluster. Whilst there was a semblance of world building, its left to Part 2 to fill the blanks. I’m  hoping in the coming issues that Joe Dunn and Jeremy Dunn fill us in as to what’s caused the flooding.

We rejoin the crew of the MSV Melantho as they continue to mine the precious Helium-3 crystals from the bowls of the giant space creature. With the crew under attack from Gutworms inside the creature, outside the rest of the crew have to contend with the arrival of The Union.

Gut Crawlers is nice little sci-fi adventure that’s all wrapped up in two parts. With plenty of space for future development Dan Whitehead and Paul Williams (with part 2 art duties by Filippo) are set to return in the coming issues.

Brendon Wright’s tale of a terraformed Mars didn’t strike me first of all. Thankfully I’m warming to it with part 2 of the story. We follow Sherrif O’Martyan as he interviews a potential new recruit. Soon trouble comes their way as the Armed Abolitionist storms the local Armoury.

Skate Worm is back for another short 1-page tale. With the aptly named “Frack-O-Matic” threatening the local skatepark, Skate Worm springs into action. Smith & Conan tell a nice simple tale that flows from cell to cell.

In search of a book on Werewolf Curses, Penny encounters Sam Nightingale. What comes next is some awkward flirting as Penny attempts to gain the book from Sam.

Penny Pentagram reminds me a lot of Buffy The Vampire Slayer. It’s a fun strip that is gorgeous to look at. With a lot of room to grow (who doesn’t like the Occult!?), David Thomas and John Roydon may have a suprise hit on their hands!

The77 Issue #3 is available to buy from November 7th and can be purchased by clicking here. If that’s not enough The77 goodness you can also check out the merchandise store here.