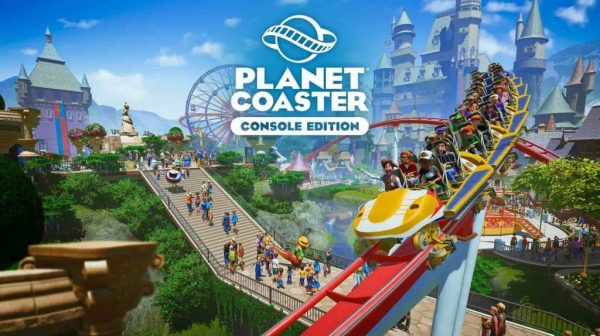 Video games about theme parks have a rich and varied tradition with some of the best appearing in the 90’s such as Bullfrog’s Theme Park and Frontier’s own Rollercoaster Tycoon series being the most applauded of these. After the recent success of Jurassic World Evolution, Frontier Developments turns their attention back to the theme park with Planet Coaster: Console Edition.

Planet Coaster: Console Edition comes packaged with three game modes for us to play. There’s the Career which features your standard tycoon challenges, a Sandbox mode which allows for infinite possibilities without the worry of money, and finally a Challenge mode that features various challenges for us to test our mettle against. Its a great selection and caters for everything that a player could look for in a game about theme park management.

Regardless of which mode we play first, the gameplay stays the same. We always have to build pathways, place rides, hire a wealth of employees and keep the park running smoothly. To achieve this Planet Coaster: Console Edition gives us a wealth of options in every category possible to make our theme park dreams come true. Each option also comes under various themes and options so we can mix and match park styles if we wish to do so. The overall presentation is gorgeous with each ride having its lights and sounds. Its incredibly immersive, and as someone who’s previously worked in a theme park it’s spotted on! 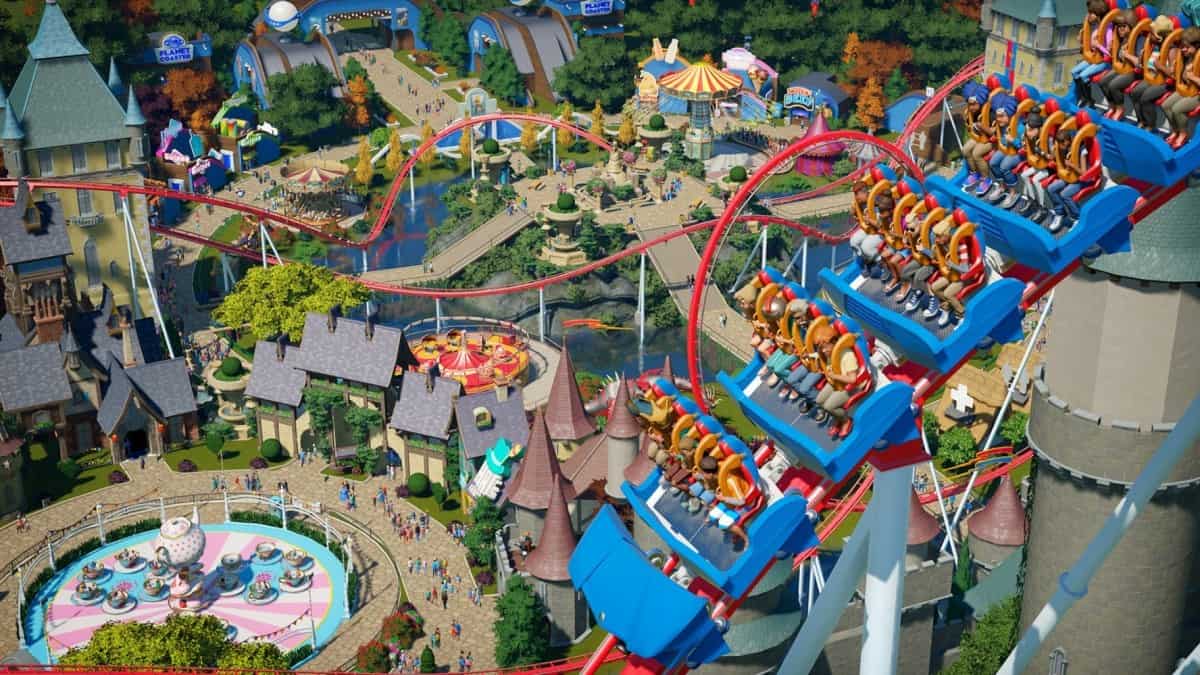 The attention to detail is amazing. Everything from the lights and sounds is how you would expect a theme park to be. We’ve all experienced this so it’s not too hard to get wrong. Frontier has however gone into minute detail. From the wheels driving the Pirate Ships swing to the jack pulling the Boomerang rollercoaster backwards, these exist on the real rides. My local theme park has its own Vekoma Boomerang and its amazing to see that Frontier has captured its design to a tee. It’s the little details like this that make the game that more authentic to play. More so it’s an absolute joy to sit back and watch it all play out.

Planet Coaster: Console Edition is nothing if not charming. The game is filled to the brim with colourful characters and charming attractions. Throughout our theme park management career, we’re guided by an assortment of advisors. Our main advisor is Oswald B. Thompson who advises us throughout the tutorial and beyond. He’s a charming fellow who’s only interested in guest happiness and making sure we’re placing rides and cleaning up junk. In contrast to Oswald, we then have Cynthia. Cynthia is our accountant and in typical style is all about making money and lots of it. Finally, we have Lucy who is our influencer and keeps us in touch with our guests’ thoughts and desires. Utilising these three guides is the key to making your park a success, even if on occasion they conflict with each other.

Despite being a console edition the game doesn’t hide its PC origins. Whilst it’s great for those who want an extremely in-depth tycoon experience and for those of us who want to design and build a rollercoaster from scratch. Using a controller doesn’t feel like the right tool for the job. There are layers and layers of menus to scroll through and using a controller slows the whole process down. Surprisingly Frontier has also opted to allow for the use of a keyboard and mouse if you wish to do so. But, considering most players will be using the standard Xbox gamepad then this could potentially contrast the chill-out relaxing vibe that Planet Coaster: Console Edition gives off. However given that the gamepad isn’t the optimal choice to navigate through the game, Frontier has done an excellent job in cramming every action onto it. 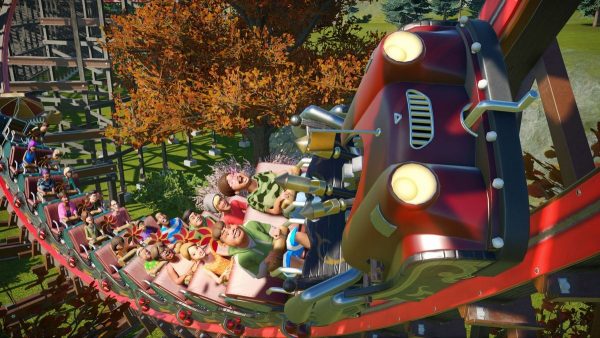 You’ll notice that the majority of the building interface is controlled via the shoulder buttons. These are used to navigate the main interface before switching to the D-Pad for navigation through the sub-menus. Whilst the tutorial does a great job at showing you most of the information, it does leave you hanging on navigating these menus. It’s a little confusing to begin with but I was soon able to fly around my park adding bits and pieces with relatively quick and easy.

There is a wealth of content at our disposal and Career mode is where we begin. Once the tutorial has finished we’re then given control of various parks that are suffering various issues. Once in the hot seat, we’re tasked with reversing their fortunes whilst making a fortune of our own, all while the difficulty cranks up higher and higher. Once we’ve learned the fundamentals in Career it’s off to the Sandbox mode where imagination can run riot. The Sandbox allows us to create a park in our image. We can use a vast variety of rides and attractions to achieve this, as well as various Pirate, Princess Castle and Sci-fi style themes.

To top this off Frontier have also added a console version of the Steam Workshop. The Frontier Workshop allows us to browse other peoples creations and download them for our use. We can also subscribe to our favourite creators as well as rate each design we use. It’s a great option to include which should keep Planet Coaster flowing for years to come. The Frontier Workshop also gives rollercoaster design novices like me a place to marvel at others creations. But it also gives those masters a platform to share their technological masterpieces off to the world. 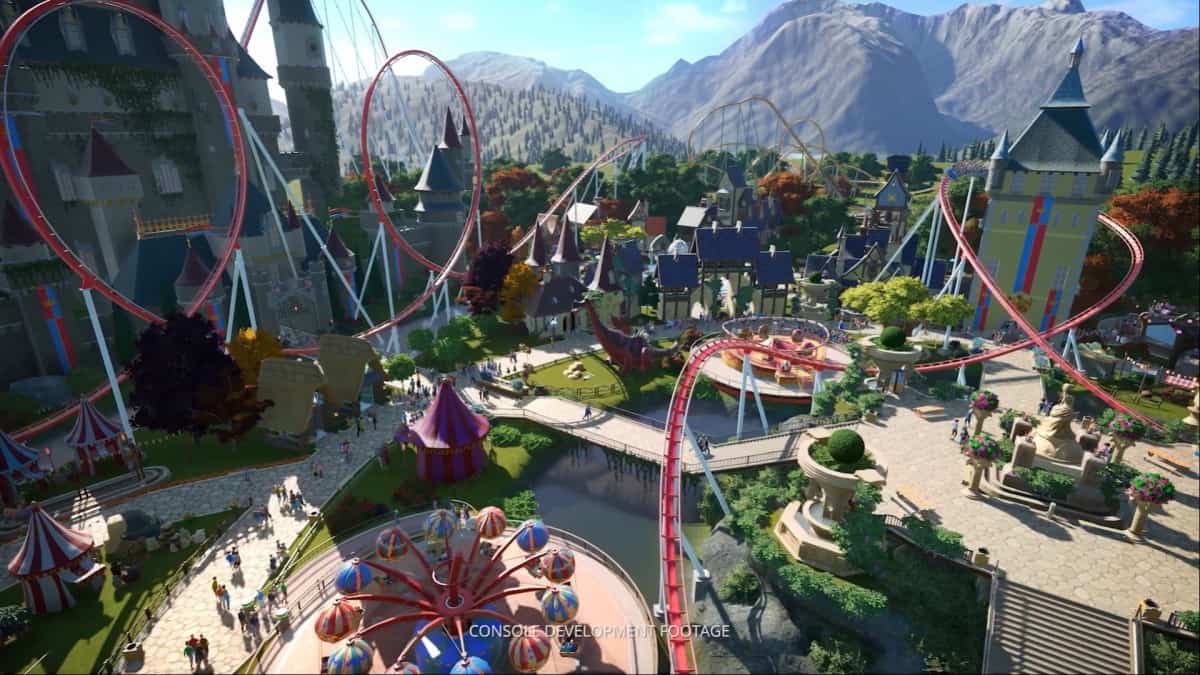 Planet Coaster: Console Edition retains a lot if not all of the charm of the PC version. Its clear and colourful graphics draw you right into the theme park world which begins from the title menu. Whilst there are the odd performance issues these are nothing that hasn’t been seen before. These hiccups are mainly slight texture pop-ups and very occasional performance drop if you decide to fly through a particularly built up park. Regardless of this, the game looks stunning on the Xbox Series X. Frontier are the masters when it comes to park builders and with the launch of this next-gen of consoles, this has never been clearer.