Fans of the award winning Monster Hunter series can now enjoy Monster Hunter Rise on the Nintendo Switch.  This latest installment of the action RPG franchise will take players to the village of Kamura on a brand new adventure, one that can be enjoyed with up to 3 other players in local or online co-op.  The new trailer shows more of what to expect in this new title in the hit selling series. 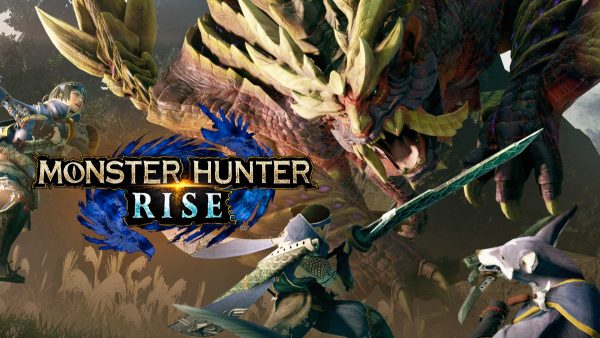 In Monster Hunter Rise, the village of Kamura is under threat from the rapidly approaching calamity called the Rampage and it is up to players to work with the villagers to prepare the defences and gaurd the place from waves of attacking monsters, including Apex monsters.  However, when not on the new Rampage questline it is also possible to explore five huge locations to explore, including the Shrine Ruins, Flooded Forest and the Sandy Plains.

To defeat the Rampage, players will need to make use of the new Palamute hunting companions and Wirebug grappling mechanic.  The new Canyne Palamute companions join the series favorite “Felyne” Palicoes and will help players on the hunt using their excellent offensive capabilities as well as being a useful mount.  The Wirebug grappling system allow players to grapple in any direction and can be paired with the 14 different weapon types to create unique Silkbind attacks.  Damaging a monster with these type of attacks makes them susceptible to a new Wyvern riding technique which allows temporary control over the monster.

With the new multiplayer feature, players will be able to complete quests with each other and like each other to increase the likelihood of finding each other again.  There is also dynamic difficulty scaling for multiplayer automatically adjusts as new players enter and exit a hub quest.

Monster Hunter Rise is available now on the Nintendo Switch.