He may be heavily tipped for an Oscar for his performance as Doctor Stephen Hawking in The Theory of Everything, but British actor Eddie Redmayne is looking to stretch his acting muscles in the superhero genre. But does he want to play one of the Inhumans for Marvel or Green Lantern for DC? Nope. He wants […]

The LEGO Movie has been one of the surprise hits of 2014, not just in terms of critical praise but box office success with a worldwide total takings of $468 million. It was unsurprising then that the sequel announced and Phil Lord and Christopher Miller would be reprising their roles as writers and directors. And, if […]

A disgusting fact to realise is that it’s been 13 years since Super Troopers was released in cinemas, where it wouldn’t find much success until its home video release. Since it rose to popularity in cult form, rumours of a sequel had always been on the cards. But, nothing ever came to fruition. However, with […] 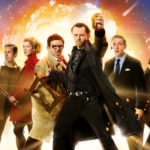 Luke Owen looks at the pubs in The World’s End and what their names might mean…. If there is one thing that Edgar Wright and Simon Pegg do very well when writing scripts, it’s foreshadowing. They always drop in little nuggets that will either give you a clue of how the film will progress or […]