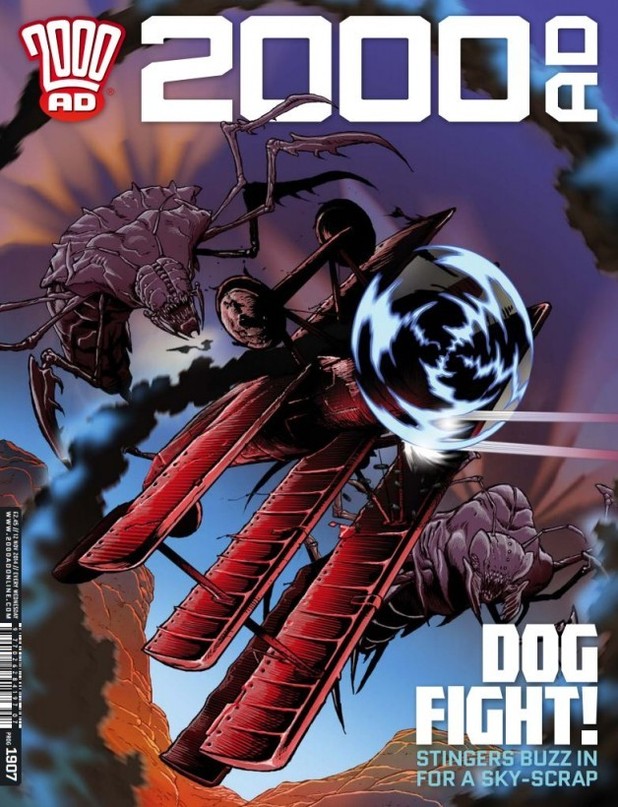 Judge Dredd co-creators John Wagner and Carlos Ezquerra reach part eight in their ‘Block Judge’ storyline this week. The progress has been slow cleaning up Gramercy Heights, but in a satisfying way. Dredd’s systematic arresting of the low-tier drug dealers to the high-level money men is a subtle exploration of proper, Wire-style policing in Mega City One. Multiple threats bubble away in the housing block, and it’s difficult to know which one will be the story’s conclusion. My money’s on the John Lennon-lookalike making a bomb in his flat.

But if you want explosions now rather than being slow built up to, Kingdom is your strip. The storyline is unabashed action, as the assorted band of mutant dogs and humans prepare to battle the badder and baddest one of Them – the enemy’s Alpha. Unfortunately, this action is at the expense of depth and the story unsatisfyingly keeps itself at surface-level. There is a nice moment when one of Gene-the-Hackman’s troops surrenders himself for the team, but other than that, the strip still feels strangely caught between emotionally empty and overwrought. The last panel, supposedly the strip’s cliffhanger moment, feels like a wasted oppurtunity: a reaction shot of seeing a vast terror rather than the vast terror itself. True, this vast terror had been the previous week’s final panel, but that doesn’t make this installment feel any less like filler.

Which is exactly what we have in this week’s episode of Greyscale, it’s pages still oozing with 90s throwback nostalgia. The suits and haircuts all sit stubbornly in that decade, while John Higgins’ pencils bestow on every man the chin of Dan Dare. This part seven of ‘Prince of Darkness’ see renegade agent John Blake take out another of his former-colleagues, The Tangerine – an operative who specialises in humilating deaths for his victims (Pat Mills’ wonderfully absurd conspiracies even put asphixiation-related deaths of kinky conservatives down to government plots). The strip is all out action, but, in this particular installment, not much is progressed besides setting a next target: The Family Man. Still, the strip is fun and the tabula-rasa of a protagonist is easy to root for – a trait our next strip would be good to take note of.

It’s odd how charming everything in Ian Edginton and D’Israeli Stickleback is when its central character is so uninspiring. It’s difficult to get past the opening few panels when you feel such indifference for the protagonist. Nevertheless, the writing has a wonderful ear for accent, D’Israeli is an incredible artist in black and white, and the main ‘Thru’Penny Opera’ narrative is actually quite intriguing. The three witch sisters persevere with their dastardly plot, turning the architecture of London into a landing strip for their unholy, other-dimensional beast.

Scrotnig Tale of the Week

Yet again, The Grevious Journey of Ichabod Azrael (and the Dead Left in His Wake) takes the best story in 2000AD. Despite being positioned as the book’s fourth out of five strips, I had decided it would be take Scrotnig status after just its first few panels.

This week, a herd of gargantuan buffalo – “IMPOSSIBLE CREATURES” – stampede into the town of Atonement, forcing Azrael to once again become its saviour. He also has showdowns with both a Native American God and a recently rejuvenated Hunter. That so much seems to happen amongst Azrael’s mere five pages is a testament to what Rob Williams and Michael Dowling have created. Epic, self-reflexive, wickedly smart, Azrael is up there with 2000AD’s best stories of the year.