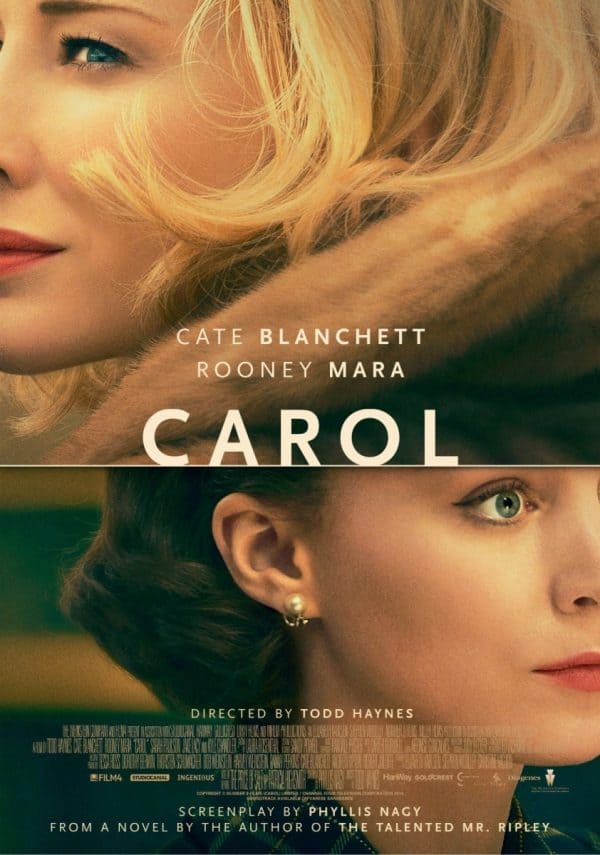 Set in 1950s New York, a department-store clerk who dreams of a better life falls for an older, married woman. 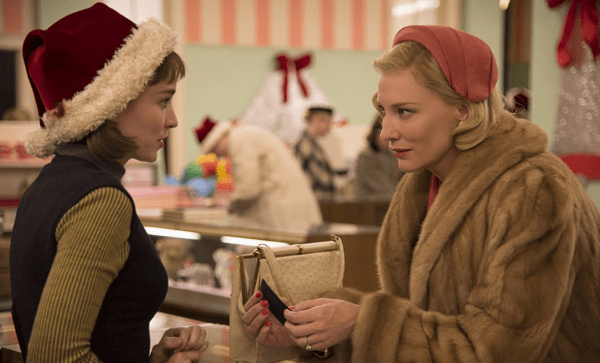 Love is the most powerful force in the universe. Unfortunately, it took us until 2015 to legalize gay marriage across the country, while the cause for enlightenment towards anyone disgusted by a relationship out of the ordinary wages on. But it’s important to remember that things were far more regressive even just a short time ago, like during the 1950s. Furthermore, that’s what Carol ( based on the acclaimed novel The Price of Salt by Patricia Highsmith) does best; it’s a portrait of forbidden love that when all is said and done, makes you grateful for the societal progress we are making.

Enough about modern day circumstances however, as Carol contains a perfectly and authentically realized recreation of 1950s New York, complete with fascinating costume design (it could be something as simple as a festive holiday spirit hat or glamorous fur-coats representing a privileged upper-class lifestyle) and production design. The amount of detail found within train-rides home, expensive restaurants, light snow pouring down on the streets, and more will suck viewers into a historical context that accentuates the permeating romance our leading lesbian pair must refrain from expressing in public.

Due to the ostracized nature of openly gay relationships at the time, there are often times in watching Carol where I felt the movie would work brilliantly, and in some ways even more effective ,as a silent film. So much of the festering affection Carol (Cate Blanchett) and Therese (Rooney Mara) show for each other is often elicited through body language and intense, lustful staring, or very subtle physical interactions. I am almost certain that if the dialogue were muted, you could follow along with the narrative just fine; the performances are that raw and believable. 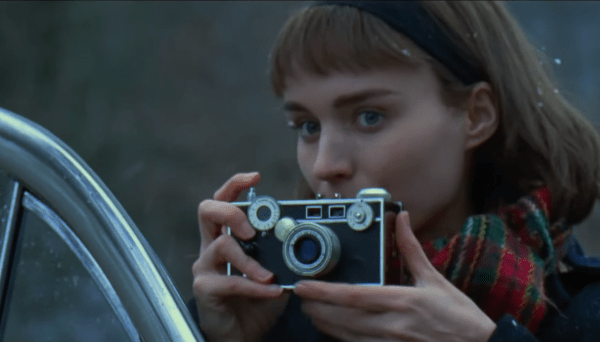 Elevating this heightened sensation of sexual tension is what is quite easily the most beautiful original score of 2015. Right from the opening credits, the powerful, melancholic melodies grab your attention and continuously guide the story throughout each moment, but wisely always pull back from time to time to never overtake a scene fully. Carter Burwell’s music is already beginning to swoop up multiple nominations at various award circuits, and it will unquestionably garner an Oscar nomination along with a potential win.

As an assault on senses, Carol is hands down one of the finest creations of the year. There isn’t a single scene that is anything less than stunning to look at, as the movie features out-of-this-world shot composition, most notably with a scene of the camera panning from Therese’s sobbing face, to the windows of the train, to her exiting exiting a taxi and arriving home. The photography also loves giving characters some space,, with many extended conversations not only being composed as a tracking shot, but panned back all the way outside of rooms, and even frequently behind glass window panes. It’s like we are a fly on the wall peering into a very complicated love affair that is immorally kept under control by the male counterpart of each female.

Some will undoubtedly write off Carol’s husband as a vindictive asshole not afraid to blackmail his wife into cooperating with his marital desires and insistence on custody of their daughter, but by labeling him one-dimensional you are doing a disservice to the grander complexities of his character. Deep down he is a broken man who truly does love his wife, but ultimately has fallen under a malevolent spell, believing that if he can’t have Carol, no one can. Certainly not another woman. Kyle Chandler is absolutely fantastic in this role, and I’m somewhat shocked that he isn’t getting much traction in awards races. 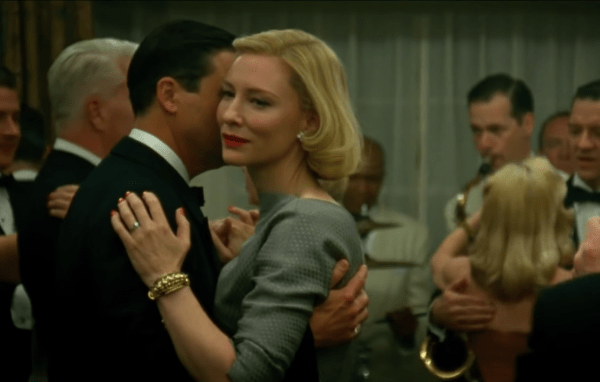 Despite all this overwhelming praise, quite a bit of Carol just doesn’t click or emotionally resonate like it should. It spends a fair amount of time building a romance that audiences can buy into (something that is paramount for a film of this nature to function properly as drama), but it is also a cold film that doesn’t necessarily serve up reason to root for any particular character.

It doesn’t help that some of Blanchett’s performance feels ultra scripted and stilted, while Mara evokes a much more natural charm. Again, it’s truly the body language and heavy facial expressions (just watch Mara for seconds on end , all round-eyed immediately after every time she is forced with making a quick decision) that carries the weight of the tale. In terms of dialogue, less is more could have went a long way, especially when some of it can get a little pretentious, but thankfully never aggravating.

Still, Carol is a titillating and measured look at a brewing relationship that is unequivocally liberating once the two finally make love. And no, I’m not solely saying that because Rooney Mara gets naked again; there is simply genuine care and beauty radiating from the on-screen chemistry of these star-crossed lovers. Then there’s the final 20 minutes or so, which are breathtakingly heartwarming, filled with pain and joy. 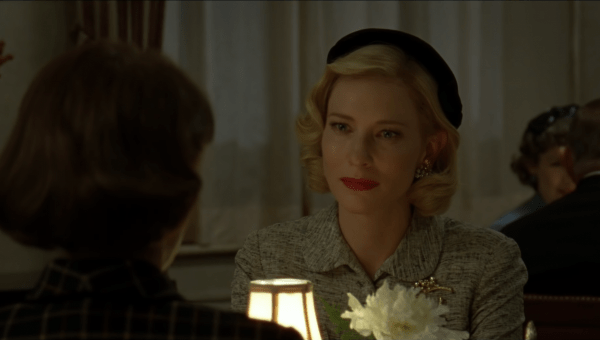 Carol is an exercise in masterclass filmmaking by director Todd Haynes that just takes a bit too long to reveal the true ramifications of its story. By then you’re hooked and invested, but it’s also too late, meaning that most will find the experience as a whole, alienating.