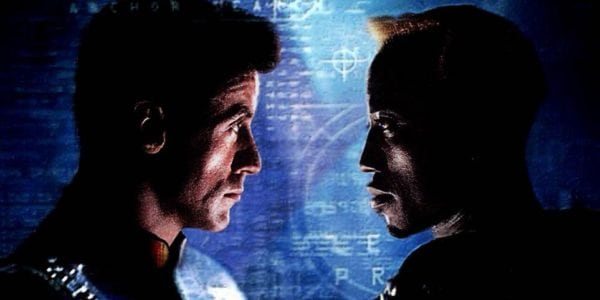 I found myself thinking recently about films that have been repressed to the dark recesses of forgotten cinema. The sort of films where you find yourself snapping a finger and exclaiming “oh yeah…I remember that!” These could be great films that have somehow not stayed in the consciousness of the mainstream. Then there is another band of films that perhaps didn’t quite get the love they deserved. In the course of time some films find that love. Blade Runner is a great example of this. With this in mind I will begin to explore films that should be shown more love, be they merely forgotten, or dismissed without due attention to their finer points.

With Sly Stallone hitting the comeback trail in such wonderful style in Creed, and reminding the world that he is actually a very fine actor when he’s got the right material and direction to work with, I feel a good place to start is his underrated and oft overlooked action classic from the early 90’s. Now I was 12 when Demolition Man first came out and I absolutely loved anything with Sly, Arnold Schwarzenegger, Jean Claude Van Damme etc. So right off the bat, Demolition Man was a slice of fried gold for me. A few years later when the Internet was birthed and glorious places like IMDB and Rotten Tomatoes came to be, I was a little surprised to find the film had not exactly gone down a storm with critics, or even far beyond mediocre ratings with audiences (the IMDB rating his actually risen a lot over the years). 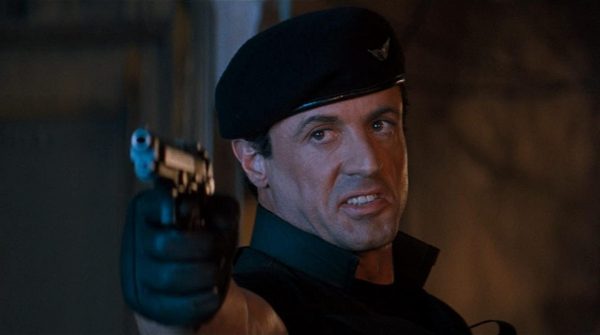 Demolition Man in many ways is a perfect action film for the current era. Perhaps it was made 20 years too soon. It’s largely set in an idyllic future which perhaps mirrors the idyll of what the PC gone made brigade might envision as a perfect, Utopian society. Crime in San Angeles (L.A and Frisco merged after “The Big One”) is almost non-existent and no one has been unlawfully killed in years. However trouble arises when insane criminal, Simon Phoenix (Wesley Snipes), who was cryogenically frozen over 30 years previously, manages to escape during his thawing and parole hearing. With the police now so ill-equipped to deal with his violent tendencies and wanton destruction the only hope lies in thawing out super cop John Spartan (Stallone) who had also been frozen after being framed by Simon Phoenix. These two relics from the past re-ignite their battle in the future.

What Demolition Man has now, which perhaps was overlooked somewhat upon its initial release, is a sense of playful irony. It’s not taking itself too seriously. This is not philosophical science fiction, yet much of the future world designed in the film is tech that has either come to pass or is on the horizon. They of course didn’t get it all right, and some things are played purely for humour such as the downright bizarre “three sea shells.” The film is funny and it’s great fun. Sly is underrated for his comical ability (largely due to his full on comedy features being so horrendously bad) but he’s good here. He’s a great straight man to all the weird campiness going on around him as he adjusts to the future he’s stepped out into. 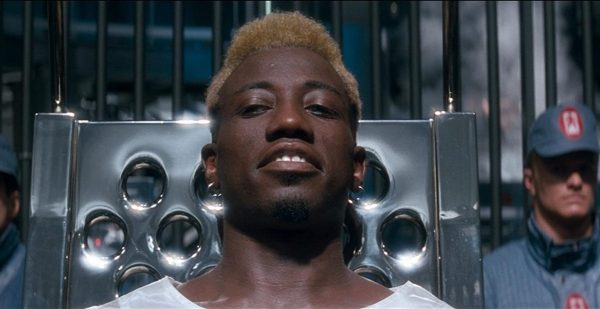 Now whilst Stallone’s recent award recognition for Creed prompted me to revisit Demolition Man, and whilst he’s rock solid in the film, I now have to focus on the man who completely and utterly steals the film from him. A then rising star, Wesley Snipes absolutely walks away with this film in his pocket. I mean, much like his character Simon Phoenix might, he just scoops it up, sticks it in his pocket and walks out the door without paying. Snipes is superb. He’s a playful, impish but deadly and intimidating villain. He gets the best lines and the best moments. He spends large parts of the movie dressed like Dennis, even sporting a blonde hairdo. Up to this point Snipes wasn’t a high-profile star, and hadn’t really found mainstream recognition as an action star. This film was the first one to really introduce him as a potential contender to the likes of Sly, Arnie, Bruce etc, and he would later cement his place with Blade. Kudos also go to Denis Leary who has a great supporting role that allows him to showcase his acerbic wit.

Another element in Demolition Man’s arsenal is the action. Before Stallone went into box office meltdown in the late 90’s, he was doing big budget action films. He and Arnold were still competing to see who could blow more shizzle up. From the opening action sequence right through to the puntastic yell of “heads up!” to finish, this film is loaded with some cool action sequences and back in that glorious period where everything was done in camera. 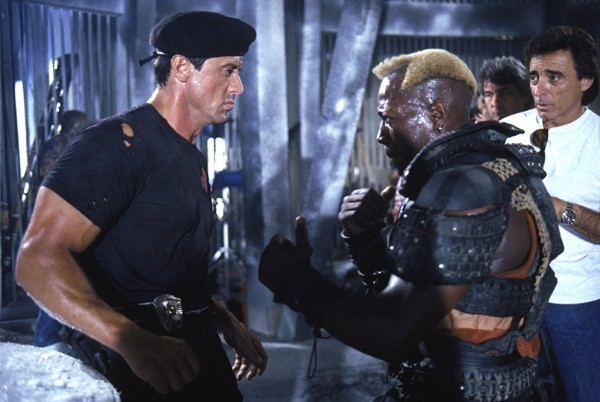 The film is not perfect by any stretch. It probably meanders in the middle whilst taking us through the ins and outs of the future. The mix of wise cracking gags, slight campiness and full on action is something that has now become immensely popular with the Marvel films. That formula isn’t new, but it’s popular again, whereas in the 90’s it was beginning to wane somewhat. Demolition Man isn’t as dumb as some critics initially passed it off as. Some elements in the film have become topical of late. Parts of the society depicted within the film are prevalent in real life. The reliance on technology. The need from some sections to sanitize and control everything. The rich and poor divide. Even Sly’s wry gag about Schwarzenegger becoming president wasn’t too wide of the mark as a mere 10 years after the film was shot The Terminator became The Governator. Most of all the films ability to have a little fun with tongue firmly in cheek and offer a little wit, gives it an edge over many action films in recent years. It’s still silly, but not pertaining to be anything else, even with some wry digs at society back then, many of which might be coming to pass.

With two action icons at the top of their game and in their prime, and big spectacle to match many of the biggest films of that era, Demolition Man is an overlooked gem which outside of a select fanbase has been a little forgotten. Dust off that copy at the back of your DVD shelf and revisit it.