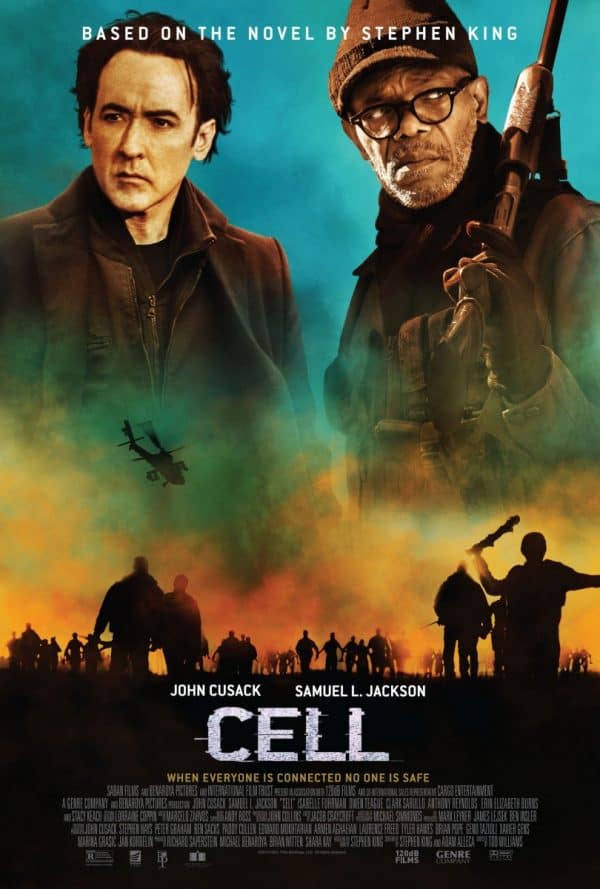 When a powerful signal is broadcast across mobile networks worldwide, cell phone users’ minds are instantly and dangerously re-programmed. Heading north through New England in search of his wife and son, Clay Riddell (Cusack) is joined by a group of survivors hoping to fend off the bloodthirsty and hyper-connected “phoners.” 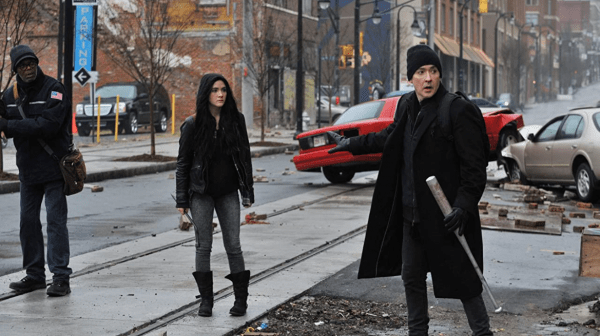 When I read Stephen King’s Cell ten years ago (2006), like many of his books, I thought it would make a great movie.  Dimension Films thought the same thing and bought rights to make the movie with Eli Roth (Hostel, Cabin Fever) directing. Roth dropped out in 2009 and then finally in 2012 and 2013, John Cusack and Samuel L. Jackson casting was announced with a Saban Films release date on VOD in June and theatrical release in July.  I was not familiar with new director Tod Williams (Paranormal Activity 2), but my hopes were raised with Cusack and Jackson seemingly perfectly cast in the roles of Clay Riddell and Tom McCourt.  How bad could a movie with these two be??  Pretty bad, actually. There are very few movies based on Stephen King books that have turned out well.  I count Misery, It, The Shawshank Redemption and Stand by Me as some of the good ones, while the stinker list is a mile long and includes such gems as Maximum Overdrive, The Mist, Children of the Corn and now Cell.

You might think I hated the movie, but I found it to be entertaining.  I was more disappointed in the potential this movie had to be AWESOME.  I thought the cell phone signal turning people into zombies was a frightening idea and made for chilling commentary on our smart phone obsessed culture.  Everywhere you look, people have cell phones.  And they are on them constantly.  How do you wipe out massive amounts of people all at once?  Send a pulse through cell phones that fries their brains.  It made me think of what George Romero did with Dawn of the Dead (perhaps the best horror movie of all time!) back in 1978.  The dead reanimated and wandered mindlessly through a mall.  It was brilliant critique of the society at the time…consumerism at its worst.  These people were dead and were still wandering around a mall aimlessly.  After reading King’s book, Cell, I thought it was a great modern take on what Romero had done nearly forty years ago and I couldn’t wait to see what the movie would do with this.

There were many things I liked about the movie.  When I saw the opening airport scene in the trailer, I didn’t think I could watch the movie because it looked so scary.  In an instant, people turned into crazy zombies who tear each other apart, smash heads into walls, throw people off balconies and over railings and attack each other.  It was frightening how quickly people turned into “phoners” and how fast they ran.  It got scarier the smarter the zombies got, forming a horde/hive mentality and roving in groups and doing coordinated attacks.  One scene in particular with a gas truck driving across a football field filled with a sleeping horde of zombies, all the while hearing the popping and cracking and squirting of skin and bones and heads, was exceptionally gross.  John Cusack and Sam Jackson were perfect casting for their roles and the scares were there, but ultimately it suffered from a poorly written script and too short of a runtime.  Stephen King actually wrote the script for this one and said that he changed the ending of the movie because people didn’t like the end of the book.  I actually liked the ending of the book and one of my disappointments in the movie was how it ended, but more on that in a minute.

Like I mentioned previously, my biggest disappointment in the movie was the potential it had to take some things from the book and really go for it.  Chief among them being the ongoing battle throughout the book between the Raggedy Man and Clay Riddell’s character.  In the movie, the Raggedy Man is only seen a few times and the climactic battle is not even really a battle at all.  He’s the guy in the hoodie that gets referenced a few times, but he never really does anything other than stand there and look menacing.  The other thing is that the book ends on a hopeful note.  Riddell finds his son who has received a corrupted signal and almost seems to recognize his father.  One of the people they picked up along the way theorizes that the signal was sent by a computer and the later blasts were corrupted by a computer virus.  He thinks that if they send another corrupted pulse into Riddell’s son, it will cancel itself out and reset his brain.  In the movie, Riddell finds his son, but he’s already gone and in a weird dreamlike ending, it appears that Clay has successfully killed the Raggedy Man and is taking his now normal son to meet with the other survivors.  There’s a twist, but not one you’re going to like. 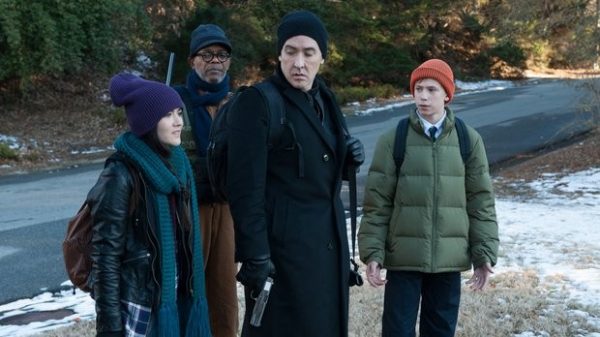 Taken at face value, it’s an entertaining movie with some great actors and some good spooks, but as is the case with most movie adaptations of books, this one fails to be faithful and in the end misses the mark on what could have been a great movie.