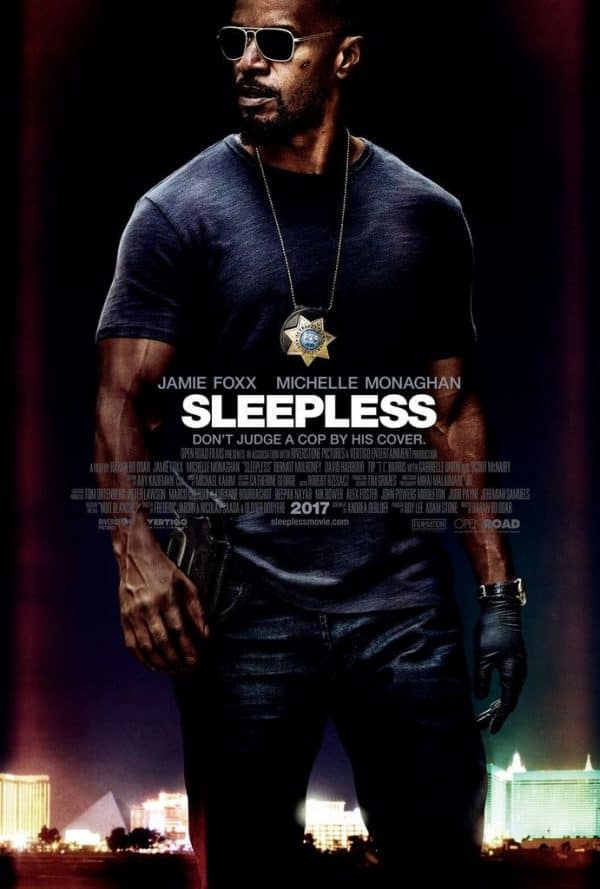 When a Las Vegas cop is involved in a drugs heist that goes spectacularly wrong, his teenage son is kidnapped by the mobster who owns the merchandise.  Rescuing the boy is a tough call because everything is against him: the police force is riddled with corruption and Internal Affairs are on his tail.  He has just one sleepless night to sort it all out. 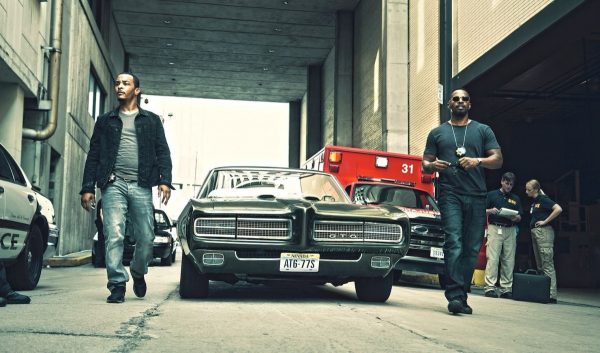 Somewhere deep in the bowels of Hollywood is a new talent in town.  He or she is probably in a dark, windowless cellar, beavering away at the latest trend.  Misleading one word movie titles.  Their efforts were on show just a couple of weeks ago, with Unforgettable.  It was anything but.  And now they’re back again, with Sleepless.

This time, all that keeps the audience awake is the constant noise of bullets, screeching car tyres and punch-ups.  Without that, the never-ending procession of cliché heaped upon cliché would send anybody to sleep and in double-quick time. It all starts with the title and the action being set in a city that never sleeps.  Original, eh?  The camera work comes off no better, with some very bog standard panoramic shots of Vegas, by day and by night, when  it’s pretty obvious that some of the big hotels on The Strip have been re-christened courtesy of CGI.  Jason Bourne this is not.  And who in their right mind would name a hotel The Luxus when The Luxor, The Strip’s very own pyramid, is just down the road and visible for all to see? 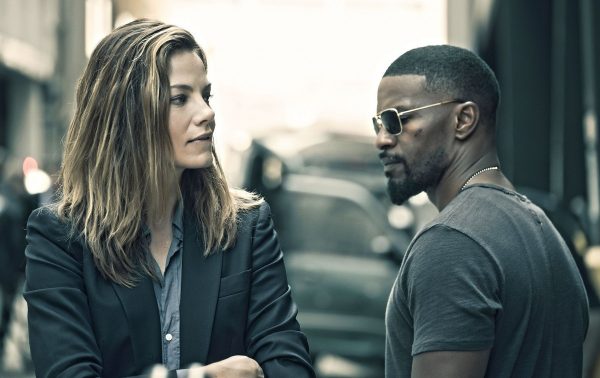 It’s frankly depressing to see the likes of Foxx and Monaghan in what is no more than glossed-up B movie and even their combined talents can’t rescue the film from the doldrums.  Especially when Foxx seems to possess super-human qualities.  When his son is kidnapped, he sustains a nasty stab wound.  One that would stop most men in their tracks.  But not Foxx!  With his constantly bleeding abdomen covered by a bit of wadding and tape, he gets into fight after fight – the old chestnut of the one in the kitchen included – is repeatedly punched in his wound yet always comes through almost unscathed.  Except, perhaps, for the occasional wince.  In the end, it takes a bullet to stop him.  And his son, when he manages to escape the clutches of the gangsters, is a chip of the old block, happily driving an SVU after his hand has come off second best in an argument with a fire extinguisher.

It goes on.  Internal Affairs officer Bryant (Michelle Monaghan) is shot and then injured in a bad car crash.  Just a few hours later, she’s up and around in the hospital, with just a few scratches.  Is American healthcare really that good?  At one point, a character utters the unintentionally ironic observation that there’s “never a dull moment.”  Are you kidding me?

Even more bizarre is that the film has already made up its mind that it’s worth a sequel and it’s going to get one.  Yet this is a movie that clearly has to be a one-off, with little that’s memorable, exciting or original.  For Sleepless, read Sleepwalk.