Ricky Church reviews Transformers: Till All Are One #12… 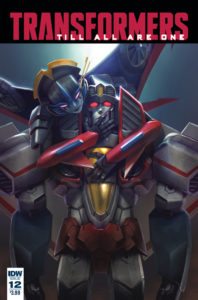 Starscream makes his most desperate move yet in order to protect himself from Elita One’s rising power. But for once the master of manipulation’s only choice is to make himself helpless to another. Good thing no one’s got a grudge against Starscream, right?

Mairghread Scott delivers a pretty satisfying conclusion to the latest Transformers: Till All Are One arc with issue #12, one that has plenty of character development for Windblade and Starscream. It nicely shows the evolution of their characters and their personal relationship while delving in what it means for them to be Transformers and an important theme in the comics as of late: the power of choice.

Windblade’s battle with Vigilem for control of her body reaches a tipping point as Starscream enters her mind to save her. The action is well paced, but its really the philosophical points made between Windblade and Vigilem that are the issue’s most compelling moments. Through this arc Windblade has been resolute in her need to defeat the evil Titan, but here she gains something she’s been lacking for a little while; her confidence. The change within her as the story progresses is striking, particularly when Starscream enters the picture.

What was also interesting, and perhaps the issue’s best moment, was Windblade helping Starscream see the potential within himself, even if he didn’t agree with it. Scott struck the note that even as one of Cybertron’s most powerful figures, he’s still driven by a fear of Megatron. She even hints that’s the one thing holding him back from truly embracing his role as Cybertron’s leader and acting out of altruism than self-preservation.

Its also fitting that Windblade defeats Vigilem not through violent means, but through her ideals and belief in the spark’s power. Not only did it restore her to her body, but it also seemed to reignite her belief and passion for doing what is right. It was a very solid conclusion to Windblade’s development in this arc.

Sara Pitre-Durocher’s art is also well done. She makes the action flow smoothly from panel to panel and her rendition of Megatron is quite fearsome looking. Joanna Lafuente’s colours compliment Pitre-Durocher’s artwork well, adding in a lot of vibrant colours. Their combined work on Starscream’s ‘true’ form is also one of the issue’s highlights and they’re both able to express the emotions of the bots well through their facial work.

Transformers: Till All Are One #12 is a nice, fitting conclusion to this arc that relies heavily on the character development and philosophy behind the story. Thankfully they both work and Scott adds much more depth to the story, enhancing Windblade and Starscream’s characters. Though they still have a semi-antagonistic relationship, both walk away understanding a bit more about each other that will hopefully be taken advantage of later.