According to Variety, Marc Webb (The Amazing Spider-Man, Gifted) has signed on to direct This Above All, a feature film based on the life story of Megan Phelps-Roper, a former member of the infamous Westboro Baptist Church. 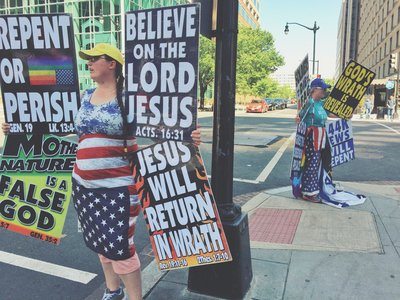 The granddaughter of Westboro founder Fred Phelps, Phelps-Roper grew up preaching the church’s hate speech, before coming to question her belief system after conversations with opponents over Twitter. She and her sister subsequently left the church, and were disowned by their family.

“Megan’s extraordinary story says so much about so many things in contemporary America, and I’m really excited about this project,” said Nick Hornby (Brooklyn, An Education), who is writing the script from Adrian Chen’s 2015 article in The New Yorker and Phelps-Roper’s upcoming autobiography. “I’m looking forward to working with the brilliant Marc Webb, CNÉ and with my friends [producers] Reese Witherspoon, Bruna Papandrea and River Road, with whom I enjoyed such a good relationship during the making of Wild.”