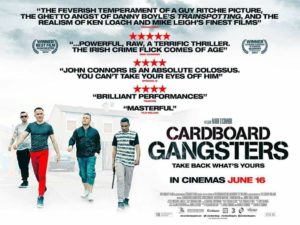 Four childhood friends have grown up in the Darndale part of Dublin and are now determined to take control of the drug trade from the local crime lord.  It means money, power, women and everything they want.  But it comes at a price.

As the local Mr Big yells after them, they’re nothing but cardboard gangsters – four young men who’ve hung around together since childhood and who are now trying to challenge the established underworld order.

Not that they see it that way.  The lads in Cardboard Gangsters have been brought up in Darndale in Dublin, where a helicopter hovering overhead is an everyday occurrence, where no take away service will deliver and where the houses are identically faceless and grey.  They want the money, the bling, the drugs and the women – and dealing drugs is their only option.

For their de facto leader, Jay (John Connors), the stakes are higher and more personal.  His mother is knee deep in debt – to the crime lord, of course.  His girlfriend is pregnant and his infatuation with an older married woman is never going to stay under wraps for long.  Given her connections, it’s not going to end well either.  All of which sounds familiar.  Because it is.  The film cherry picks plot lines from a number of other crime movies, mixes them together, changes the setting to Dublin and, hey presto! a winner at the Irish box office is born, the highest grossing Irish film of the year there so far.

It’s difficult to get away from all that familiarity.  The punchy, energetic style nods in the direction of Danny Boyle and Trainspotting, yet it’s that intensity that spurs the storyline along and keeps you watching.  That, and the performances, especially from the four young actors at the centre of the action.  At the outset, it’s difficult to tell who’s the main man of the group: it turns out to be the quiet one, Jay, and John Connors gives a thoughtful performance, digging deeper into his character’s more brutal side and warped sense of loyalty as the action progresses.  His scenes with Fionna Twamley Hewitt as his mother are particularly heartfelt: he lies to her and she knows it, but when he tells her the truth, she refuses to accept it.  Because she knows the consequences of his actions will be grim. 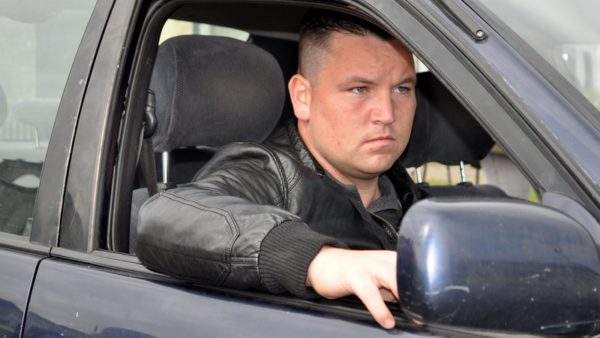 There’s good support as well from former EastEnder Kierston Wareing as the woman he can’t resist and Jimmy Smallhorne as her husband, Derra, who’s determined to protect his “business” from the young upstarts.  All behind an aura of middle class respectability and a modern detached property with a “Bless This House” plaque above the door knocker.

Cardboard Gangsters is well performed and crisply directed, but cries out for a plot with more invention.  Setting a well-used storyline in a different location simply isn’t enough.  Director Mark O’Connor, who wrote the script with Connors, clearly knows how to get the best from his cast and has a knack for pace coupled with ferocity.  Now all he needs is a screenplay to match.