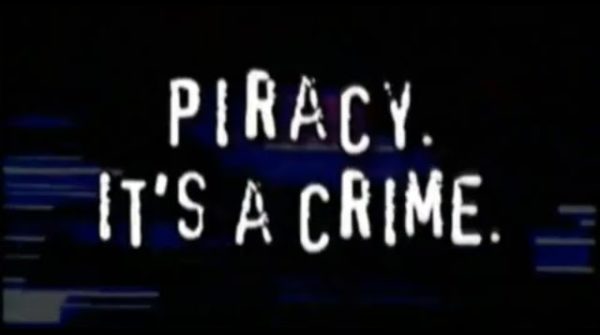 “DOWNLOADING PIRATED FILMS IS STEALING” screams the infamous anti-piracy advert that was seemingly attached to every single DVD released in the mid-noughties.

Showing various scenes of thievery accompanied with some grungy font, the advert sledgehammers its point into your brain. If you illegally stream or download media content, you are no better than a carjacker. The ad quickly became an annoying thing you skipped over. It’s a nice symbol of society’s attitude towards piracy.

Hollywood’s victory won’t last long as fighting piracy is like playing a vigorous game of Whac-a-Mole. Every time one is hit, up another one pops. Inevitably, in this day and age, this culminates in hacking, as HBO,  Disney and infamously Sony can attest.

Everyone knows pirating is bad and illegal. So, why do we do it? Why is there a laissez-faire approach towards copyrighted material?

This interesting Reddit thread gives some inclination. Many posters argue it is no different from borrowing a book from a friend (although it isn’t a stretch to imagine the torrenter didn’t pay for the content), others infer paying for it can be too expensive, while some suggest accessing the media is too difficult. They want to pay for it, but can’t so they don’t.

One Redditor, Magento, reveals they pirate because they “used to record songs from the radio”, and as anyone who’s browsed one of the Millennial-based listicles Buzzfeed is obsessed with, there is always a mention of getting angry as the DJ ruins your recording of a particular pop song. In some minds, this is no different to watching Game of Thrones online, and some users blame piracy on the content creators.

TheDarkDoctor said on the same thread: “If HBO made their shows available to people that don’t have cable I’d be more than happy to pay for Game of Thrones but they don’t so I have to pirate it if I want to watch it before the internet spoils it for me.”

The rise of streaming sites like Netflix, Amazon Prime and Spotify with their cheap subscriptions and no contracts are an enticing prospect for the market because they make the new or popular film and TV easily available. Netflix, in particular, is buying the rights to films straight out of Sundance that may not have found an audience theatrically. It’s no surprise they’ve recently joined forces to fight piracy.

What is Hollywood planning

Hollywood is adapting to the digital age. There have been some changes as the giant blockbusters open worldwide simultaneously instead of favouring the domestic market. The arthouse or independent films are released on VOD, a system that makes these type of films more accessible while opening them up to more piracy as ripping the content is easier. Then there is the infamous Screening Room proposal backed by big filmmakers including Steven Spielberg, Martin Scorsese and Peter Jackson that proposes people pay a premium to stream the latest releases on the day of release. Filmmakers like James Cameron and Christopher Nolan argue the venture will ruin what makes cinema special, with Cameron’s producing partner Jon Landau saying the idea gets rid of the “sanctity of the in-theater experience”.

Ironically, Screening Room is founded by Sean Parker, the man who told Facebook to “drop the ‘The’” and who was basically one of the first digital pirates with Napster. The company vaguely says it has anti-piracy technology in place and it will need to combat piracy to survive. In an open letter, The Art House Convergence, the roughly 600-strong specialty cinema chain group, believes the proposal will cause a “wildfire spread” of pirated content. Cersei Lannister approves of their wording.

The Screening Room may not be an ideal method of combating piracy but shortening the window between initial release and home-entertainment release does seem to be the most popular idea. Apple, Amazon and Comcast have recently revealed proposals aiming to let customers stream the latest films 30-45 days after initial release.

But, these type of plans is not completely popular in Hollywood. Some major directors, including Christopher Nolan and Quentin Tarantino, are against distribution systems like this.

On the promotion trail for Dunkirk, Nolan called Netflix’s business model “pointless”. His comments were seen as a bit elitist, although it isn’t entirely clear if he’s against Amazon’s model of releasing their movies in cinemas before they end up on Prime.

When countering Nolan’s comments, Oscar-nominated director Ava DuVernay simply tweeted: “But, what if there is no movie theater in your neighbourhood?”

While DuVernay isn’t talking about piracy, her comments do indicate that the more film is part of your life, the more likely you are to go on Putlocker. A to-be-published study exploring the use of film piracy by film students for their curriculum shows 60% watch films illegally just to catch up, and many aspiring filmmakers will not be able to keep up with the status quo, possibly ruining their aspirations.

Other methods of fighting piracy involved a now abandoned six-strikes system by the MPAA and RIAA. Hollywood is still trying to deal with piracy. It’s not something that will go away easily, so their current conversations are important.

In the end, Redditor Origin_Of_Darwin sums up the whole piracy situation succinctly when they said: “After trying to shove money down their [HBO] throats, I gave up and stole from them.”