Back in February it was reported that Gina Torres will be reprising her role as Jessica Pearson from Suits for a new spinoff series, and now Deadline is reporting that the upcoming season seven finale of Suits will serve as the backdoor pilot for the new show. 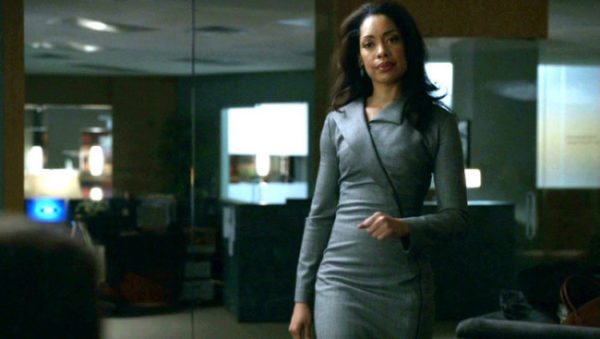 According to the report, the spinoff won’t be a legal drama, but will instead explore the world of Chicago politics. The pilot is being written and executive produced by Suits creator Aaron Korsh, and will see “Harvey Specter (Gabriel Macht), Mike Ross (Patrick J. Adams), Louis Litt (Rick Hoffman), Donna Paulsen (Sarah Rafferty) and Rachel Zane (Meghan Markle) reuniting with their old boss and friend Pearson as she adjusts to her new life in the Windy City. When she is forced to enter the dirty world of Chicago politics, Pearson must rely on her legal wits and valiant relationships from Pearson Specter Litt to navigate this unknown territory.

“Jessica is going to get in a tangle and a tussle with some Chicago politics players,” said Korsh. “They will be of different levels, from the Mayor on down, and maybe not all will be directly involved in politics, we may have a real estate developer or someone of that type, and some power brokers within the city and maybe further a little down the rung in that world. As we go though the spinoff episode, at the end hopefully you’ll have a great idea of what her future is moving forward and who’s a potential ally and who’s a potential enemy in her world.”

“The powerhouse character of Jessica Pearson, expertly brought to life by the incomparable Gina Torres, has won the hearts of television fans everywhere,” states Chris McCumber, President, Entertainment Networks, NBCU Cable Entertainment, with Chief Content Officer, NBCU Cable Entertainment and President of UCP Jeff Wachtel adding that: “We felt we owed it to the audience – and ourselves! – to follow her journey beyond the original show.”

The season seven finale of Suits will air in 2018.