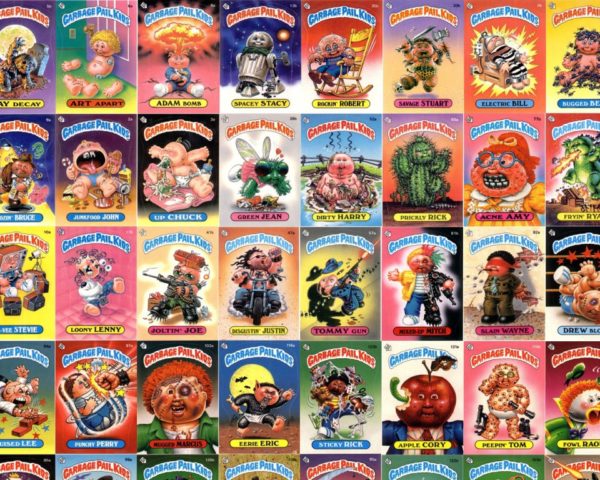 But it was happening. Amateau had planned for The Garbage Pail Kids Movie to head straight for the TV market and hired Linda Palmer (credited as Melinda Palmer) to help him write a script and Michael Lloyd to write the music. The story had been put together by Bill Tennant, the man in charge of Atlantic Releasing, who were distributing the movie. “I don’t know where he came up with it,” Amateau says of Tennant’s story. “He gave it to me on a sheet of paper, we made it a screenplay, and we were shooting in sixty days from the time I walked into his office… It was a very, very, very low budget picture.” Newgarden himself had hoped to be involved with the writing process, but was told to stay away. “I would have loved to be involved in a Garbage Pail Kids script but Arthur [Shorin] would have never permitted it,” he says. “Topps definitely didn’t want us spending our valuable time on anything that might interfere with getting the next series out. With these license deals it was always a case of ‘take the money and run.’ There was never any semblance of quality control once Garbage Pail Kids passed to another entity.”

In fact, so removed was Newgarden that he wasn’t even given the final script to look at before the film went into production. “After our initial meeting with Amateau we were intentionally taken out of the loop,” he recalls. “New Product Development director Len Brown might have been sent material to look over as the project moved through development, but it was clearly Topps’ policy to just go along with anything they came up with and not to make waves. Topps has a venerable history as a very short-sighted company.” 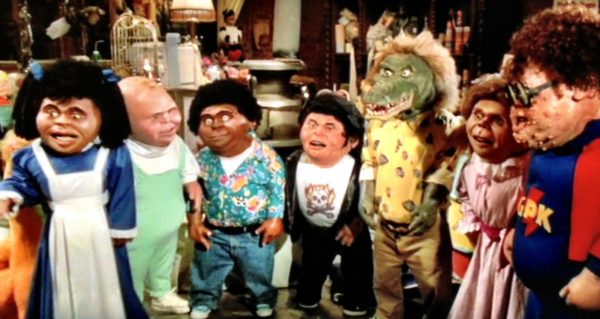 In an ideal world, Amateau would have done The Garbage Pail Kids Movie as an animated feature, but this would be too costly for their very meagre budget. The other option was to do a part-computer animated movie like Who Framed Roger Rabbit, but this was also out of their price range. “We did the economic expedient,” Amateau says. “We got dwarves – there’s plenty of them – we got dwarves and put heads on them, and found out how long they could survive in there without breathing, and it turned out to be about five, seven minutes. So you had to rehearse everything without the heads on, put the heads on, have a paramedic [with] a stop watch. Little sons of bitches go in there, and you say ‘action’, and you shoot until they can’t breathe.” One such Little Person was Arturo Gil, who signed on to play Windy Winston. “I was not familiar with the Garbage Pail Kids trading cards before the movie until I was cast,” he says. “After, I did research the cards and how they were so popular with kids. I loved how they were designed to parody the Cabbage Patch Kids. I bought several packs and the aroma of the gum brought fond memories of my childhood when I collected and traded baseball cards with friends.” Although happy for the work, Gil argues the script was missing something. “I think the script could’ve been more evil,” he says. “More gross and less tame. I mean, the cards depicted grossness, which kids love and the film failed to covey that.” 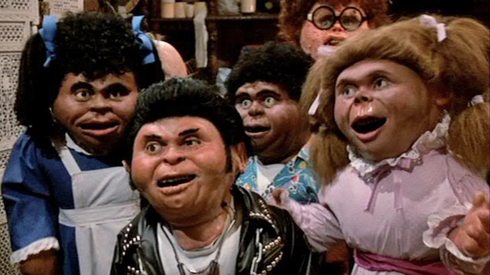 Gil and his fellow Little People cast members would be put into suits with giant animatronic heads, which would be controlled by a team which included John Carl Buechler, who had worked on horror films Ghoulies, The Dolls and From Beyond, and there has been a persistent rumour that The Garbage Pail Kids Movie was initially conceived as a horror film. Mark Newgarden, however, doesn’t seem to think this is true. “Well, if that’s true they succeeded,” he jokes. Like movies that have tried this method before, Toho’s Godzilla series for example, the conditions inside the suit were not great. “We had limited vision and sometimes we would miss our final mark,” Gil recalls. “At times, the production would put tape on the floor to help us follow a path so that we wouldn’t bump into furniture or the other cast members. We could hardly hear the other actor’s dialogue as we had servos grinding inside our heads animating the facial features of our characters.” Not only were the animatronic heads difficult to wear, the servos inside the huge heads made dialogue delivery difficult. “We literally had to scream out our lines so that Anthony Newley and Mackenzie Astin could hear us,” Gil adds. “Our voices were muffled in the heads. Many times, Rod Amateau had to scream ‘cut’ several times because we could not hear.”

Starring alongside the Garbage Pail Kids was British actor and singer Anthony Newley, best known for his hit song What Kind of Fool Am I from 1966’s Stop the World: I Want to Get Off, as Captain Manzini and young Mackenzie Astin as Dodger. Mackenzie was the son of John Astin (known for Gomez Addams in the hit TV show The Addams Family) and Patty Duke, who director Rod Amateau had worked with in 1964. “I had been on The Facts of Life for three seasons,” Astin recalls. “Making the jump to the silver screen is something everyone wants to do. It’s a different vibe. This came along, and the title alone appealed to me. I was a fan of the cards. I know I was more enamoured with the idea of starring in a movie than focused on whether the material was worth investigating… The contracts were signed by the time my dad had a chance to look at the script. He did everything he could to get me out of it. Like, ‘dude. This is not a good idea, son. I know what I’m talking about.’ But the ink was dry.” Gil recalls fond memories of working with the pair. “Anthony Newley was a total gentleman and I enjoyed watching him perform,” he says. “Mackenzie was very charming and was a joy to interact with. After each take, he would lean into one us and whisper if we were okay.”