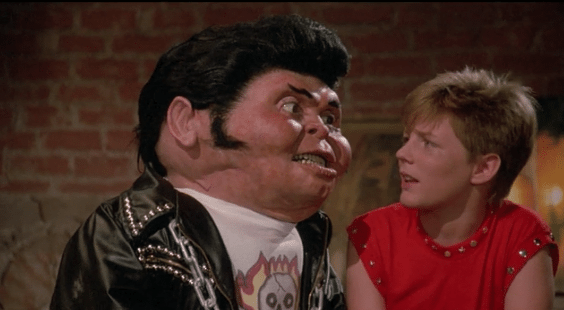 Due to its low-budget nature, only one head had been made for each member of The Garbage Pail Kids. If it got damaged in any way, the production would have to shut down. “Normally, we used special paint that has a flexible medium in it that allows the puppets to move, but I had never used the stuff,” effects artist William Butler says. “I painted the heads only with acrylic paint not knowing it would harden. We got the heads on set, dressed the little people in outfits, and as the mouths opened up, they ripped on both sides like the Joker.” He adds: “I single-handedly nearly destroyed the movie. Lucky for me everyone rallied and filled the cuts, but if you look closely at the movie, the heads look like they have scarring on the mouths.”

Worse still, the entire movie wasn’t shot on a soundstage, but instead in a warehouse San Fernando Valley with little air conditioning. Not only did the metal roofs screw with the radio controls causing the animatronic heads to malfunction, they had to have hoses connect the indoor generators to air conditioners outside in order to keep the struggling cast alive in the sweltering heat. “They were hampered by me being a minor at the time,” Astin adds. “It was maybe an eight-hour day as opposed to twelve or fifteen.” Gil adds: “Being a low budget film, I am sure there were some downfalls, but I didn’t care. I was a working actor. I think everyone was there to make money and move on to the next job.” In interviews since the film’s release, Kevin Thompson (Ali Gator) claimed Phil Fondacaro (Greaser Greg) left The Garbage Pail Kids Movie halfway through to film Willow and was replaced with his brother much to the chagrin of the production, however, Gil does not recall this happening. “I can’t remember someone leaving halfway through production,” he says.

A lighter story Gil does recall however is the scene in which the Garbage Pail Kids use quad bikes to get to a biker bar. “I loved riding the custom fit Suzuki LT80 Quadsport that I drove in the film,” he says. “They raised the foot pegs and the brake pedal. In fact, one night while on break, we snuck out and rode around the exterior set and neighbourhood until they were taken away for fear of injury. The two quads were gifted to Mackenzie and I thought they’d give me one. Bummed, I went out and bought one for myself.” Another point of contention surrounding the film’s release is whether or not it was always intended to get a theatrical run. Rod Amateau has said that it was made for the television market, and cast members do not recall being told about anything more than that during production. “To be honest, I don’t recall if it was going straight to video or theatrical release,” Gil says. “We didn’t have a screening. The only glimpse of the film before release was when they wanted me to re-dub my lines for Windy.” But clearly a decision had been made somewhere, as The Garbage Pail Kids Movie was released on August 21st 1987 to a smattering of negative reviews and a disappointing $661, 512 opening weekend. “Newley was famous for a play and song he did, What Kind of Fool Am I,” Astin recalls. “And when the movie came out, my dad got a chuckle out of a review that started, ‘now I know what kind of fool Anthony Newley is.’” Gil adds: “When The Garbage Pail Kids Movie finally opened at my local movie house, I brought my then girlfriend and her parents with me. We were all so excited to see the film. In fact, there was only one other family in there sitting behind us and my girlfriend’s Mom excitedly turned around and told them I was in the film. Now I know why there was only one other family in there.”

In total, The Garbage Pail Kids Movie earned $1.5 million; however it only cost $1 million to make. “I don’t think anyone over the age of five saw it,” Amateau says. “Unless their parents were accompanying them. It was designed for that, because that is a tremendous market, and, done properly, can be of huge. It’s an evergreen. A new generation of children grow up every couple of years. You can keep re-releasing that picture. That’s what Disney’s whole approach was. In other words, the whole reason you can put out Snow White and Cinderella and Beauty and the Beast is because there’s new children every year. And the great thing is – when a child goes to see a picture – you’re talking about four people. Mom, and Dad, and he’s gotta friend he wants to take along, and that’s got a mom and dad. So maybe, six, five… Kids don’t go alone. Little kids don’t go alone. See my point? And you get those big ticket prices. I mean, the kid is a kid price, but you get the adults, that’s seven and a half, ten dollars.” Although the film wasn’t a success in any way shape or form, plans were put into place for The Garbage Pail Kids Movie 2, only without Rod Amateau returning to direct. “I said no, no, no, I’ve gone this far, I go no further,” says the director, who passed away in 2003. “But I will be happy to advise and help, and even help with the writing and choice of director. There’s plenty of young guys around who’d love to do it, but I’m too old for this shit.” A script was written and handed back to Amateau for critique, but financial issues and debts with the banks meant Atlantic Releasing was forced to close their doors – leaving The Garbage Pail Kids Movie 2 in the trash.

With the rise of the Internet and more people getting eyes on the small-seen The Garbage Pail Kids Movie, the film has earned somewhat of a cult reputation as it reaches its thirtieth anniversary. “I thought it would’ve been locked up in some dark vault and forgotten,” Gil jokes. “But, guess what? It resurfaced for the 30 year anniversary and has become a cult classic. Go figure.” William Butler adds: ” I think it was a stupid idea of a stupid screenplay, with stupid designs, that made for a cacophony of stupidity”. For Mark Newgarden, however, it’s nothing but a painful memory. “I sat through the movie once and that was one time too many,” he says. “I’m still in denial and still hoping it will go away forever.”

My thanks to Arturo Gil and Mark Newgarden for taking the time to answer my questions. Other quotes taken from here and here.